Don't miss the demo at Steam Next Fest 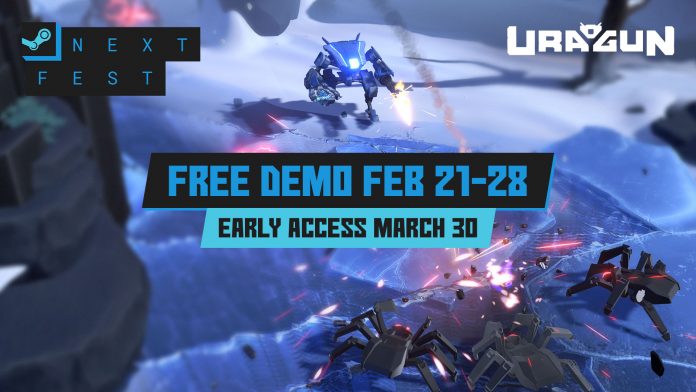 Kool2Play’s top-down action game Uragun will officially go into Early Access on March 30th, 2022. Players can get a taste of being a deadly but charming Mech looking for his pilot in a world overrun by hostile machines during the upcoming Steam Next Fest, starting on February 21st.

After years of development and a complete overhaul of the gameplay in 2021 with the introduction of Game Director, Fran Avilés (Deep Rock Galactic) to the team, Kool2Play is finally able to show its action-packed, futuristic top-down shooter.

In Uragun you play as a deadly but charming Mech that has awakened to discover a world overrun by corrupted AI. Searching for your missing pilot and friend will bring you to different spectacular locations like a deserted Barcelona, an overgrown and futuristic Hong Kong, or the mines hidden in the snowy mountain rifts of North America. In order to survive, you’ll have to master the game’s challenging and fast-paced combat. Luckily, you’ll be able to unlock new weapons, from shotguns and auto-rifles to plasma boomerangs and rocket launchers, which will grant you a ton of customization options and a fair chance against your foes.

The content of the demo consists of the tutorial and 4 missions taking place across two different biomes. Players will be able to familiarize themselves with the basic mechanics, learn how to control the Mech and be introduced to the narrative of the campaign.