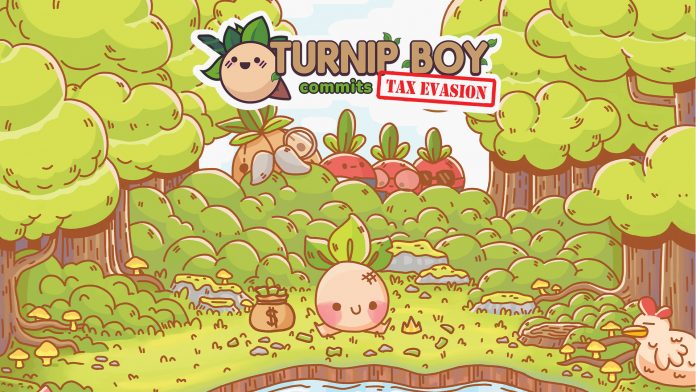 Turnip Boy Commits Tax Evasion is developed by Snoozy Kazoo and published by Graffiti Games. The game was released on Steam in April 2021 and came to Xbox and Gamepass in April 2022. The game has a nice charm to it and is in some ways, visually at least, comparable to the classic Zelda games.

In Turnip Boy Commits Tax Evasion you play as… well… a Turnip. He is on the brink of losing his beloved family greenhouse because he committed a little bit of tax evasion. Luckily Mayor Onion and the IRS can give him the greenhouse back if Turnip helps collect some specific items for the Mayor. So you go on an adventure to collect all the items the mayor wants and at the same time help, or not really help, some of the inhabitants of the area.

Every character is just funny to interact with and can be so strange at times. In one of the first “side quests” you need to deliver some items and a love letter, but instead of giving it away, you rip it apart. This is kinda a recurring thing, ripping apart documents like taxes, books, and property ownerships.

The world of Turnip Boy is filled with puzzles, enemies, and bosses that you will need to get past. You will get some items to help you on your quest like a teleporter box, a watering can, and a sword, these items are super easy to use and you can do a lot of stuff with them to complete the puzzles, especially the teleporter box is one of the items where puzzles get harder.

While the game isn’t really hard by any means, it’s just a ton of fun, I personally just turned on god mode and just tried to enjoy the experience, and you for sure will. It’s just a game where you can turn off your mind and just enjoy it while not being intensive at all. I had no problems with the game at all other than 1 crash, the main starting area was extremely laggy for some reason and 2 achievements are unobtainable at the time of writing.

Visually Turnip Boy Commits Tax Evasion takes after the 2D Zelda games a lot, it’s a simplistic game, but the visual style really gives the game so much more character. The characters that matter all have their own visual style and if other characters mention someone you know right away where you need to go for some side stuff.