DEX.EXEYour Source For Games
HomeArticlesTrophies That Made Us Go Through Hell To Get Them
ArticlesTeam Talks

Trophies That Made Us Go Through Hell To Get Them 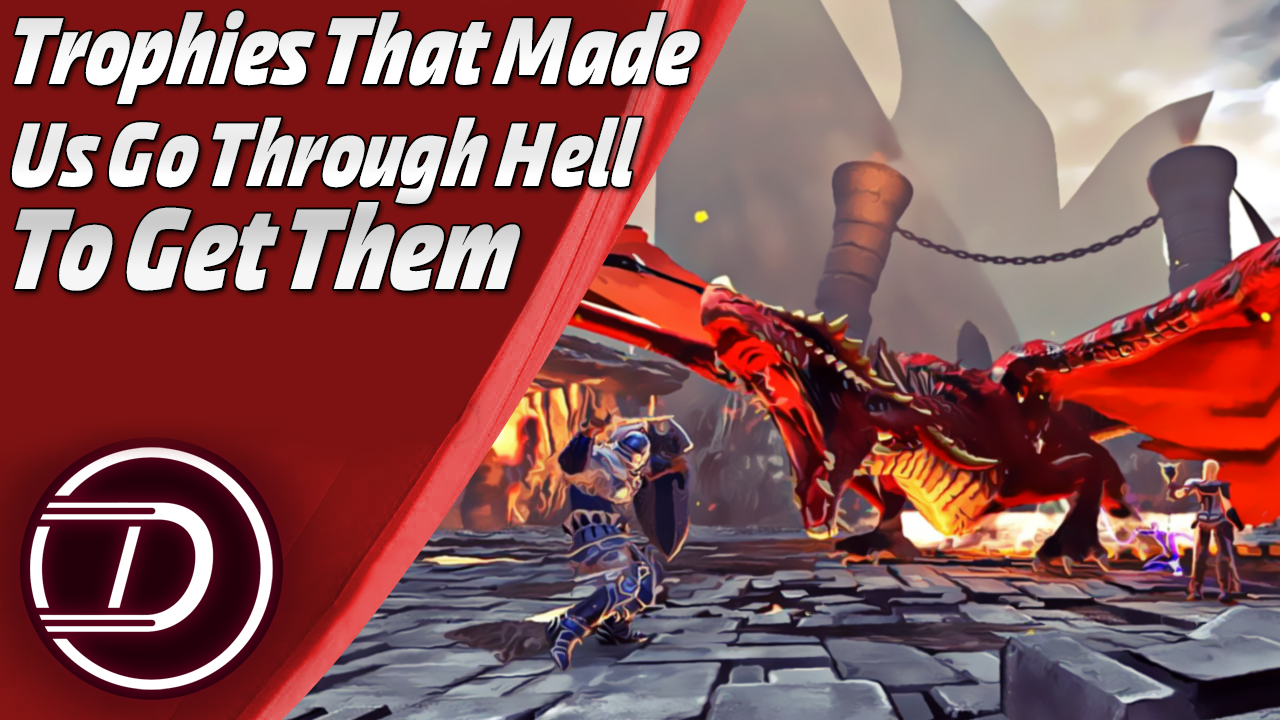 Welcome to Team Tuesday. Here we look at a recent or upcoming game and talk about something related to that game or just tell some tales of our video game adventures. This week we finally see the release of Doom eternal. The game drags you down to hell to kill some demons. This made us think about another thing, what are some of the trophies we got that dragged us to heel to get them?

So my pick is a game that I really love, but that 1 trophy, god, that made me hate it so much! So my pick is the game Neverwinter. It’s a F2P MMO-RPG, a bit like World of Warcraft. The game is actually super fun up to a point. this point is when you have finished the main game, got max “level” and the grind starts.

There is this 1 trophy that literally made me go to hell. for that trophy, you need to kill 1000 dragons. There are a bunch of trophies for killing 500 different monsters so you would think it would be easy, but no. You can only kill the dragons at 1 point in the game, A dungeon in (you can guess it)………. Hell. At the Boss Fight of that raid spawn 2 baby dragons, then you need to die to respawn before the boss again and the 2 baby dragons respawn. It seems easy, and it is. The problem is that killing the dragons and respawning takes about 2 minutes, so 1 minute+ per dragon, doing that 1000 times ain’t fun.

The things that are done for trophies. Play a game this way. Do this Easter egg. Find this item. Lookup a character’s skirt….wait what? Yes! It’s a thing! Some trophies are funny, others shameful, and some make us wanna blow our brains out and are pure torturous hell! If you’re a trophy/achievement hunter, you’ve hit a trophy or two like this, and you know exactly what I mean. But let me tell you about a game called Accel World vs Sword Art Online.

This game was a spinoff of the games spinoff storyline. Spinoff² if you will. So there a trophy for getting a ton of titles. A title is an in-game accolade, so “visit area x so many times” or “level up this character to 1,000”, or “kill x amount of this enemy.” Now this trophy requires 100 Titles! Now this required so much grinding. So much so that I had to kill a boss, not once, not twice, but 2,500 TIMES!!!!! THAT’S ALOT! Never mind the fact of killing 500 of each enemy type, or going into maps 30 times each, that I had to kill a boss for each time! So tack on another like 150 boss fights, and you do nothing but bosses! This trophy was torture. It was so boring, I lost brain cells from it. I wished I was getting tortured in hell!

Now would I recommend the game to a fan of the two animes that wanna see a pretty fun crossover game? Absolutely. Would I recommend them doing anything other than the story? Absolutely not if they like having their sanity! If you do wanna do it, I suggest setting up a padded room for yourself, because trust me, you’ll need it.

During my trophy hunting career, I faced up a lot of challenges which were like going through hell. Despite that, I don’t define myself as a hardcore gamer because I play games I really like or I want to try just for curiosity.
However, one of the hardest trophies I faced up is the “Turntable Perfection” in Dj Hero which consists of earning 5 stars in every mix on expert difficulty. It took me almost 2 years in order to achieve it and that also was my latest trophy needed for the platinum.
That challenge was a nightmare but the satisfaction I had when I finally completed it was something I can’t describe this day.

MotoGP 09/10 is a PS3 game that most people probably never tried. What makes this game so special is that until late November 2018 no one had successfully (without the means of hacking) achieved the Platinum Trophy.

This game released in March of 2010 and was met with great reviews. Even now the game holds up against recent MotoGP releases with its fast-paced unrivaled gameplay speed.

The reason behind the over 8-year wait for a Platinum achiever was a single trophy aptly named Champagne! Your objective for this trophy was to “Win a race against a full grid of human riders”. The problem with this was simple; upon release, the capability of the internet did not allow 16 human riders to connect on a grid at the same time. Even if there was the slightest chance you were faced with the issue that even if one player disconnected or “rage quit”, then the winner would not be awarded the trophy.

Thankfully it was discovered that there was finally a way to connect 16 players in the P2P environment, which led to a number of players reaching for old copies of this classic to finally grab that elusive trophy.

Many boosting nights were quickly arranged, of which I was part of, with 2 PS3’s/TV’s set up for me and my alternate account and Champagne has now been achieved by a decent number of people, but the initial challenge still stands. How many dedicated players can you get together at the same time that are willing to patiently wait their turn and help others along the way on a very unstable P2P platform…?!

There comes a time when every trophy hunter plays a game and they don’t truly know what they’ve gotten themselves into. That is what happened to me when I decided that I was going to buy and platinum Call of Duty Black ops 3. Overall this game doesn’t look too difficult if you can look past the difficulty related trophies. But there is one. One trophy that will be the platinum breaker for many. The trophy I speck of… is “Personal Decorator” This trophy… is a nightmare. It takes more commitment to get this trophy than any other trophy in any other Call of duty that I know of. Only rivaled to “CoD: World at War” ‘s veteran difficulty trophy.

This trophy basically requires you to 100% the game and more. Think of it as 110%-ing the game. You have to…

This is a lengthy list and I can not stress the amount of time it takes and the difficulty of some of these challenges. Let’s breakdown some parts of the list. Master of Arms: This require you to get 18,250 kills across all guns. 600 kills per gun to be exact. This takes FOREVER to do seeing as you only get around 200 kills per mission on average. You have to grind out the infinite enemy spawn spots. Legendary Service: You die in one hit… one hit. enough said. Immortal Fame: It’s self-explanatory as to why this one’s annoying. Above and Beyond: There’s 146 accolades in the game, some are simple and some are just downright annoying. Duty Calls: More challenges Hoo-Ray… as if 146 accolades wasn’t enough. And this is probably the hardest one because of the challenge, “Ready for anything – Complete all waves of the Combat immersion on realistic” Combat immersion is an area where you’re surrounded by some obstacles and walls and enemies spawn in wave by wave. You have 16 rounds to complete and you’re on realistic difficulty so you’ll die in one shot. You can only do this solo.

335 hours it took of my life. But I did it, I pushed through with dedication and I sacrificed my liberty to earn this trophy. I didn’t stop there however, I went on and did all the DLC I got all the zombie trophy and I got 100% I am a part of the 0.15% who have gotten 100% in the game and I am forever proud of that. Shout out to Stefant2002 for helping me with co-op and zombies.