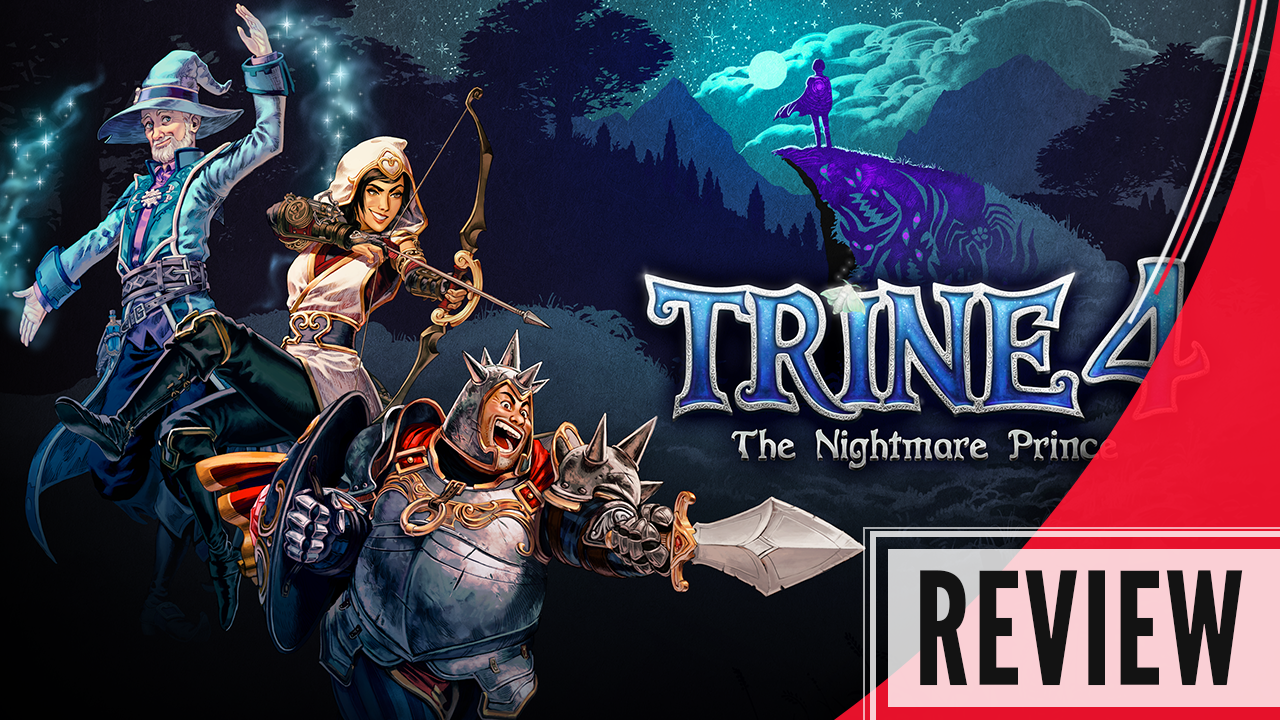 Trine 4 is the latest installment in the Trine franchise, developed by Frozenbyte, and published by Modus Games. It was released in 2019 on Consoles and PC.

There once was a prince, who was infected with a dark magic. So he was imprisoned in the Astral Academy and given an amulet to make it so his powers could never manifest to crazy levels. What was this dark magic exactly, and what did it do? It allowed his dreams to become reality, and also infect others around him. So if you were scared of squirrels, his magic would manifest your darkest nightmare. Then you may experience a giant killer squirrel! Either way, the Prince didn’t like being held in the Astral Academy where the mages kept him in check. So he ran away, and that’s how our journey begins!

You then see what the crew of playable characters have been doing recently. You get to take control of Amadeus, Pontius, and Zoya, as you meet up and get tasked with stopping the prince. Now it’s off on adventure again! The story is easily the best in the series so far, and the writing itself is superb. As much as the titular Nightmare Prince is a villain, he’s also just a man, struggling with captivity and fear and regret at his life choices. So it was easy to feel really sorry for him, even if he did end up getting himself into the situations he’s in now. Then with the lovable crew, you can see how much their friendship has grown over the series, because they laugh at each other, and joke about each other. My favourite part was in a snow level, when Pontius and Amadeus are talking to Zoya about her new clothes choice, and she talks about how it all helps her arthritis. Then they laugh at her out of disbelief, and she explains it all to them. For some reason I was dying, but it also shows again how the characters have grown so close.

As you also travel through the lands, trying to find the Prince, you end up seeing the effects of his magic, all throughout the land. You find animals that need help getting this, but you also see their fears manifested in the level, so you know what keeps them awake at night. Even if it’s just for a level, it’s nice to see so many different stories happening throughout your journey, even if sometimes the storytelling is thin. But I really enjoyed it regardless.

Now this is what it’s all about. This is the meat and potatoes of the entire Trine series. The puzzle/platforming gameplay! As you work your way through the levels, you have to do some platforming and puzzles, but luckily in this game, nothing is too difficult. Whether it’s Amadeus making a box so you can reach a ledge, or Zoya using her rope to swing across a gap, or eventually Pontius can reflect rays of light off of his shield. It all works so well, and it’s fun to do. Eventually you will start mixing and matching the abilities, and you even acquire new ones. So you’ll be making a box with Amadeus, and making it float to the sky with Zoya. Or attaching two boxes together and making Pontius hang them off a stick so you can make it over a platform. I know I’m talking a lot about these two, and not much about Pontius, but in all honesty, he doesn’t have many puzzle aspects until a bit late in the game. The only real thing he does early in the game is slam down on a seesaw, so the object on the other side flings him high up in the sky.

The levels themselves are also kind of littered with collectibles and hidden areas, with secret puzzles to do. In every level there is a set amount of collectibles to obtain. The more of these you get, the more skill points you get so you can, well, get skills. Some of them are really useful. Like Pontius freezing nearby enemies, when he stomps on one. Some are silly and I never really found a good use for them, like the Bouncy Ball you can get for Amadeus. In each level there are letters you can gather at birds roosts, and chests you can open that give you items, that build silly little items, just because they can. Is there any use for them? Of course not, but the characters always have silly dialogue to go along with them, so why not gather them if you find them!? Plus the hidden puzzles are sometimes a good way to give your brain a workout. There was one bonus puzzle late in the game that I tried so hard to solve, but ended up not being able too. Luckily it was only a side puzzle, so I was able to still move on.

Now I’d also like to mention the combat. There’s not much here in terms of it, and it’s also very very basic. But then again that’s not the basis of the game. But each time there was a combat area, it felt more like a chore than a fun time. I ended up employing the same strategy every time to finish off each segment. I’d switch to Zoya, freeze enemies with her elemental arrow, then switch to Pontius and smack them with my sword and usually that would instantly kill them. Rinse and repeat. So sadly, it got a bit stale, a bit fast.

Now this game is absolutely gorgeous. From the beautiful snowy mountains, all the way to the creepy tunnels and destroyed Astral Academy. The colours are vibrant and stunning and nothing looks muddied. Even when you had to do puzzles with running water, or water droplets, the water all looked like it was individually made, as opposed to a blob. I do wish there were more water levels though, to show off the beauty that it had. Now there were some texture clipping issues or things that shouldn’t be where they are. When enemies spawn, they make purple foggy platforms. Sometimes I knew when an encounter was coming because I’d see the fog in a wall that shouldn’t be there yet. But that was the only real issue. The sound itself is so serene and calm to go along with the exploring and puzzle solving, that it actually lulled me to sleep late at night. I’m not even kidding. It was like falling asleep to a wonderful lullaby. I’ll be the first to say, that is the first sign of a good soundtrack to me!

Now apart from the main story itself, and the trophies, the game itself has no deal replayability. There’s no new challenges or skins to unlock. You can however go back to each level you missed collectibles on and get them per checkpoint, as opposed to replaying the whole level. So if you missed 3 collectibles at the 3rd checkpoint in level 10? You can choose to start there. But after you’ve got it all, and done it all? You have no reason to. Unless you really love the series of course! Although then again, is it really a bad thing that a game has no replayability? To some yes.

Trine 4 is a culmination of everything Frozenbyte has learned throughout the course of the series, all rolled up into one fun package. The writing is great, the characters play off each other well, and the story is the best one written yet, even if it’s still a bit light. The 2D Puzzle/Platformer gameplay is the best it’s been as well. The game is gorgeous and sounds amazing if you need a lullaby to sleep to, and I can’t recommend it enough, especially if you want a quick game for the weekend. Go buy this, or play it on PsNow or wherever else you can!