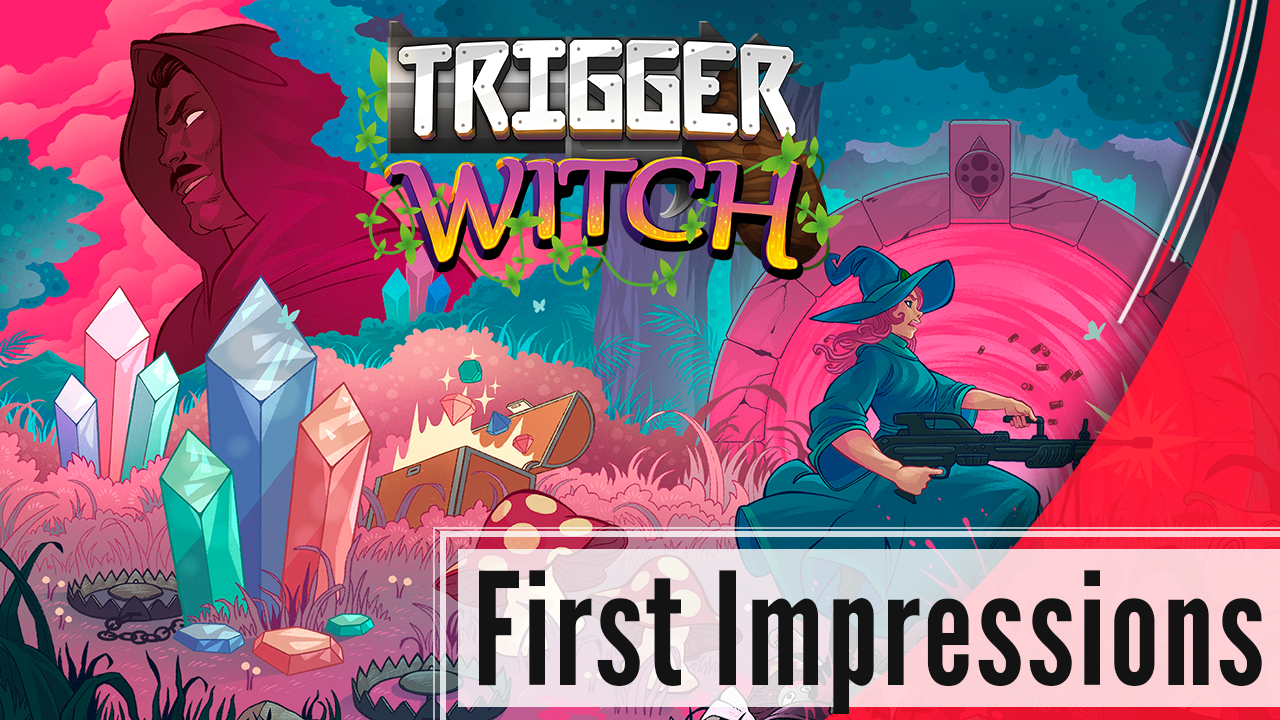 Trigger Witch opens with a straight homage to what it wants to be, and sets a precedent right then and there going forward. There’s Colette, laying in bed, being told to wake up, sort of like another hero we should all know. Then you have a choice of dialogue options, each with their own dialogue that follows from the other character, and then you’re off to the races!

To be honest, I read a lot of the text in the game very fast, because I wanted to get right into the meat of the game, which is the exploration and gameplay. From what I read though, it seems like the wonderful team at Rainbite have taken their time to make a fun and silly, engaging story to play through. With dialogue options as I mentioned before! So you can go through the game picking all the bottom options, that seem to often be the kind of jerky response, or the top choices, which seem more like the “let’s do this!”, kind of options. Either way, I can’t wait to see all the dialogue that’s been written, and get lost in the lore of the world.

Now for the gameplay. Oh god, the gameplay! It’s so fun and smooth and silly! Now the demo is only on Xbox One at the moment, so if you have one, I recommend trying it. But the game plays like a top-down shooter, where the right stick is your aim button, and the right trigger is what you use to shoot. Now it took only a few minutes to get around to killing woodland creatures, but I was so ready! You get to start with a little revolver that shoots big large bullets at your enemies and blows them away. You eventually find your way to having an assault rifle and pair of SMGs, and this is where the game gets wild! You can shortcut all the weapons you find, to the d-pad, so eventually, you’ll be picking your favorites and sticking them there.

While you blast through the game, you don’t ever have to worry about finding ammo though! Considering when you kill things, your ammo regenerates for each of your guns eventually. That was one of my concerns, on whether I’d need to manage ammo. But I’m so happy I won’t need to when the full game comes! Then you get to play through basically a tutorial dungeon, learning what kind of puzzle elements to expect in the game. From dashing over traps, to killing enemies on switches, to maybe even doing races! Plus there are gonna be plenty of giant-looking bosses to mow down, but I’m not gonna spoil any of that!

I also can’t stop this article without talking about Pinata Mode. The mode you’ll wanna play if you don’t like blood, or are playing with children maybe. This turns the game so silly, considering the enemies blow into pieces of candy, as opposed to body parts and blood. I played part of the demo in this mode, and I couldn’t stop smiling, it was so funny. Plus if you have extra controllers, you can try drop-in/out coop mode too! So hopefully July rolls around fast, because I cannot wait for this game to come out. Especially after having a little taste!