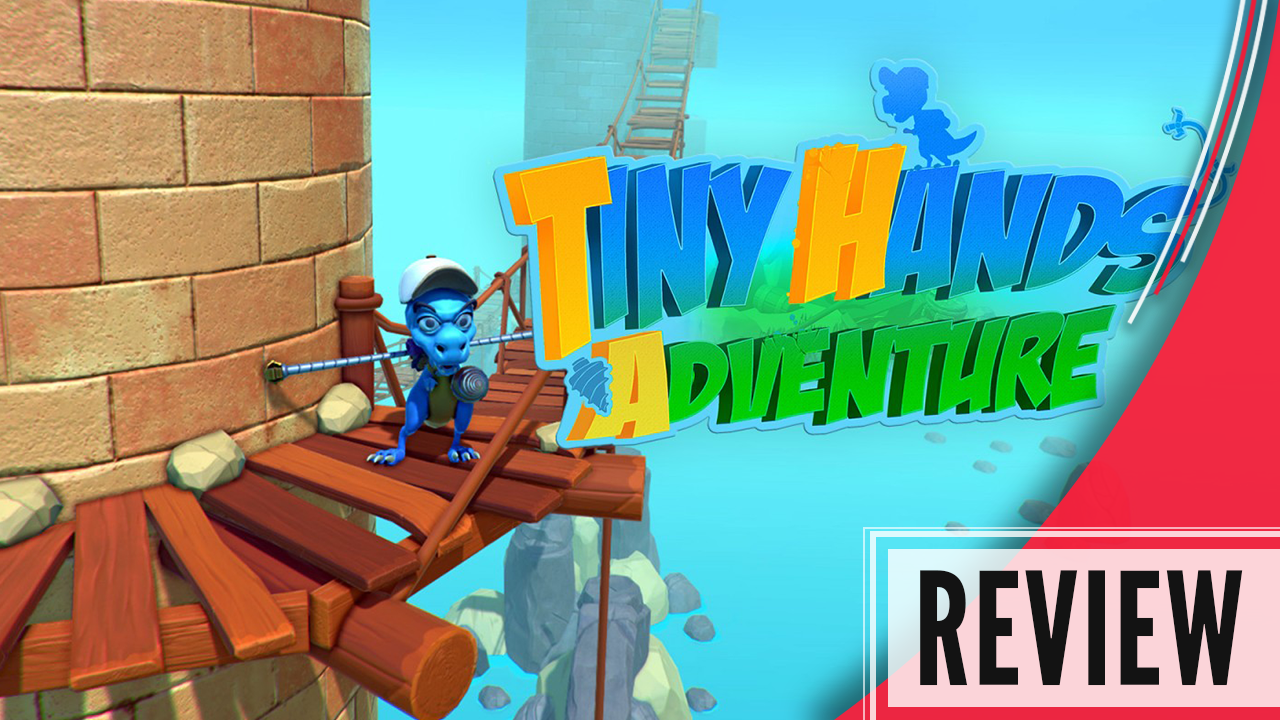 Tiny Hands Adventure is an indie platformer that was developed by Blue Sunset Games, FunWare, and Trident S.A. It’s available on all consoles and Steam.

When you start playing Tiny Hands Adventures, there is no opening cutscene or anything of the sorts. The second you hit “New Game” on the main menu, you’re hit with a brief loading screen and then dumped right into a tutorial level. I was a bit jarred at first. So I restarted the game and tried again, just to make sure I didn’t skip anything. Nope. There was nothing. So I finished the tutorial level, and then started getting the story. You play as a Dinosaur named Borti, who just so happens to be a T-Rex. Borti wants to be the world’s best soccer goalie, but he can’t because he has tiny little arms. So he finds the Magic Fairy, to help him become a great goalie.

That’s the story. That’s it. That’s all. Then you’re thrown right into levels. Now the game is broken up into 5 Hub areas, each with their own set of 4 levels. Think Crash Bandicoot 2. Then keep thinking about Crash Bandicoot. That’s all this game is in its entirety. What seemed to be a love letter to Crash, found its way to be a blatant rip off, with stolen ideas, and level designs. Each area has 4 levels in it. To clear the level, you have to find an orange gem. Sound familiar? Although you can beat the level without finding this gem, you can’t advance to the boss, without finding all the orange gems in the area. Now all of the gems are basically in plain sight. Except one. In a level, I had to replay it FIVE TIMES, because the gem I needed was on a green sign, that I somehow missed, and I thought was just decoration. But other than that, there was no issue finding them.

The game itself plays like a platformer. Or like Crash, except slower. Borti has a basic spin attack. Yup, that’s right, a spin attack! This is used to break boxes (yup) that contain meat, which is used to get an extra life when you have 100, and to defeat enemies. Or you can jump on enemies, if you’re lucky! The hit on everything is god awful. You have to land directly on an enemy for it to die. A little to the left? You’re dead. A little to the right? Oh that’s right, you’re dead! Even when my spins were clearly making contact with some enemies, they weren’t dying! Then there’s the issue with some enemies that blend into the areas. There was one enemy that I died to a billion times, because I forgot it was there! It was a blue frog on a blue frozen mountain. At first I thought the game was broken, but then I noticed the itty bitty frog that I was running into.

As for the level design, it’s pretty decent. Although some are wildly short. There were a few levels that I was finishing in about a minute or two. At first each level had different aesthetics to them, but eventually they repeated. My favourite were comic book style levels. They had that kind of animated look to them, and they were all side scrolling levels! Though the one thing about the side scrolling levels, is that you could still move on the vertical plain! So you could literally fall off the sides….or front? But at least the controls were right enough for this to feel somewhat good to play. You could move around in the air in the middle of a jump, and the game never felt floaty, or slippery like some platformers feel. But there were some parts where you’d just get the height needed to clear a jump.

There are also bosses at the end of each area. You kill them, and take their powers for yourself. Although none of their powers really reflected on the power you got. Kill a fire breathing dragon, and tell it you want it’s fire powers? Sorry, you get stilts instead. How does that make sense!? Every boss fight plays out the same too. Avoid it’s attacks, hit it 3 times. Woopee. Except one of the bosses had you hitting buttons to raise a platform, and if you weren’t quick enough, the platform would lower, and you’d have to try again. So that was pretty challenging at first, until it became an annoyance. Mostly because of the camera angles. The camera was always a view from the sky. In levels themselves, the camera moves from area to area on its own, and you have no control on it. So it would make seeing some things extremely difficult!

As I said earlier, the game prided itself on being a love letter to Crash, until it ripped it off entirely. When I say that, I mean it did. Entirely. If you ever played Crash Bandicoot 1, you’ll remember the level where you run towards the camera, and the giant rock chases you. This game has this exact level. EXACT LEVEL! Same jumps, same rock chasing sequence, EVERYTHING. I was shocked to see such blatant copying. Though I will admit I did have fun playing the level, only because it is so hectic, but in a good way.

You also have 5 gems you can collect in levels. At first I was unable to get them all, because I needed upgrades from beating bosses. Like a drill to dig up the ground, or mechanical arms to swing across large gaps, like Doc Oc from Spiderman. But eventually I was able to get every gen in one run of a level, starting at about the fifth level in the game. When you get all five of these gems, which the game calls “shapes” you unlock the “Hard version” of the level. I played one just to see what it was like, and it was just bland. All it did was add an enemy every step, and took away checkpoints. But if I died, all the enemies I killed, stayed dead anyways! So checkpoints were moot to begin with! But when you beat the Hard versions of levels, you get a White Gem, so long as you find it. Finding all 20 lets you into a “secret area”, so the game says. Again, I honestly don’t care to bother. By the time all 20 levels were done, so was I!

By the time the credits rolled around, I hadn’t felt like I accomplished anything. You never really use the abilities you earn. There was no true story, there wasn’t even a villain in the game! So why should I care about the outcome? The level themes repeated, the gameplay got stale, and it turned from silly fun, to a slog, even if the game only had about a 2 hour run time.

I can’t in good conscience recommend this game. Even if you use it as a stepping stone to a child for the Platforming Genre. Sure it has a few nice levels, tight controls and it’s a nice love letter to Crash, which it so wants to be, but nothing else is good. You die when you feel you shouldn’t have, the upgrades never felt used enough, if at all, and there’s no true villain to push you to the end. If you want to suffer on PlayStation, at least there’s a platinum trophy, but I don’t think it’s worth it. Even for a few bucks. But if you have a few friends over, with drinks, and nothing else to play? I guess this would be something. But if you have any other choice? Pick something else. Please. Leave Borti to go extinct. He deserves solace after this mess.