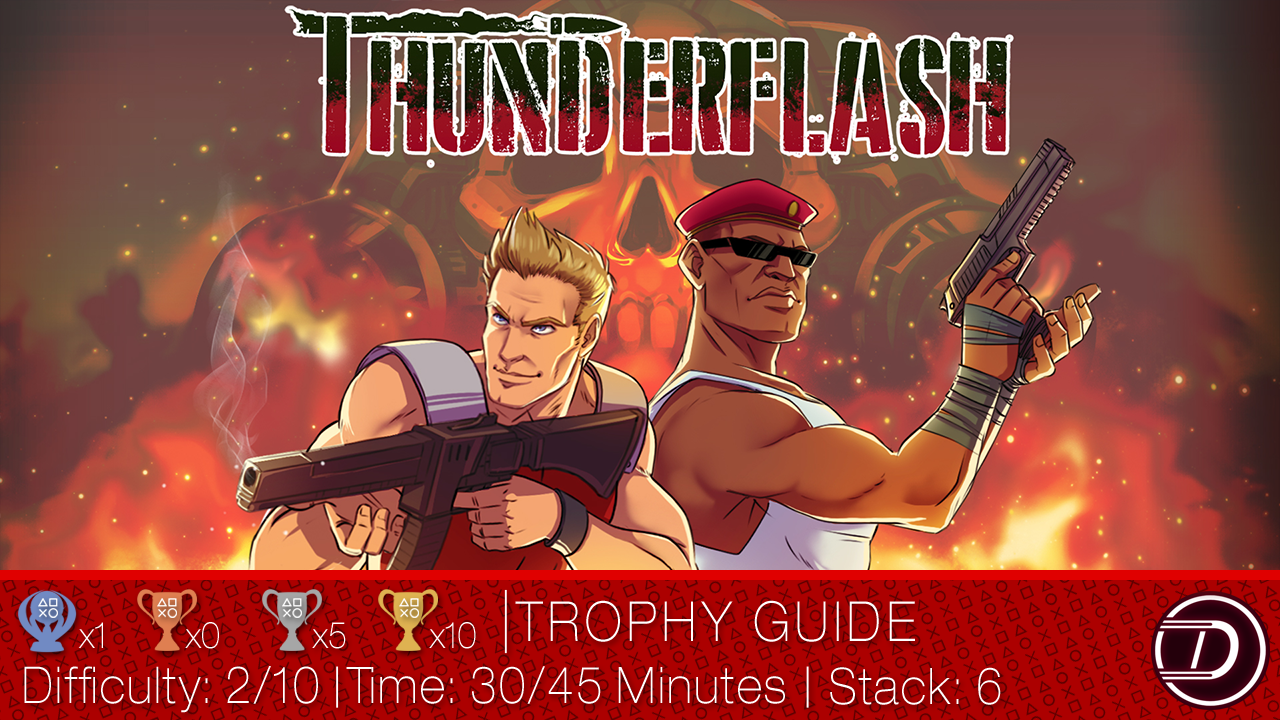 Welcome to the Thunderflash Trophy Guide!
Grab your biggest gun and get ready for a wild shootout on Thunderflash! Show that you have what it takes to be a warrior!
This game is developed by Seep and published by Ratalaika Games.

Step 1: Complete the game
In this step, you have to focus on completing the “Arcade mode”. You will have 10 credits (10 lives) and the game will give additional credits if you die, but you will have to start from scratch.

Road to the Final Victory

Step 2: Survival mode
Second step: from the main menu select “Survival” and choose the music and the character you want.
You will be fighting inside an arena against drones and you will have to kill 100 of them in total for your last remaining trophy.
Keep moving and shooting and remember to pick up upgrades you can find in the middle of the arena from time to time.

Once you have killed 100 drones you’ll earn these trophies:

Mission 1 is completed after defeating level 1-5 which is a boss fight.
This boss is quite simple: shoot at the rotating weapons first, then at the main boss. Don’t even worry about dodging projectiles as you should have all the credits left.
If not, don’t worry as you can select the level from the main menu and restart the boss fight immediately.

Mission 2 is completed after defeating level 2-5 which is a boss fight.
This boss is a dragon that moves around the area while shooting at you. Dodge projectiles and damage him with your weapon and rockets. Don’t even worry about dying as you you can select the level from the main menu and restart the boss fight immediately if you die.

Mission 3 is completed after defeating level 3-5 which is a boss fight.
This boss has some enemies around that will deflect your bullets if hit. Your man target is the main boss.
As always keep shooting with your weapon and rockets and don’t worry about dodging projectiles as if you die, you can select the level from the main menu again and restart the boss fight immediately with all the lives.

Mission 4 is completed after defeating level 4-5 which is a boss fight.
This boss floats and spawns some mines that fall from the sky. Also, he can teleport and change the spawns of the mines. Your man target is the main boss: shoot, move when he teleports, and avoid falling mines and the ones on the ground.
If you die, you can select the level from the main menu again and restart the boss fight immediately with all the lives.

Mission 5 is completed after defeating level 5-5 which is a boss fight.
This boss has 2 laser weapons that you can destroy. He also shoots missiles and a 5-way projectile when you destroy the 2 lasers.
Furthermore, 2 enemies will spawn from the sides of the area, kill them before proceeding as they are annoying as hell.

As always keep shooting with your weapon and rockets.
If you fail, you can select the level from the main menu again and restart the boss fight immediately with all the lives.

This trophy will pop after completing level 2-3.
You will be on a boat and the only thing you have to do is to keep shooting until the end.

This trophy will pop after completing level 3-2.
This time you will be on a motorbike. Keep moving up and down while always shooting and you will have no trouble finishing this level. Just remember to avoid rocks that are on your path.

The description of this trophy is wrong as it will pop at the end of level 4-1 instead of 4-2.
It’s jetpack time! Rules are always the same: keep moving and shooting until the end of the level.

This trophy will pop after completing level 5-4.
On this one, you are climbing the longest ladder ever and you can only shoot in 2 directions, right or left.
Keep climbing and time the enemy fire to avoid taking damage and kill or ignore them until you reach the top of the ladder.

A tank is found at the end of the first area 1-1. Destroy it to pop the trophy. Use your rockets to fasten the procedure.

A helicopter is found at the end of level 1-2. As you did with the tank, use your rockets to destroy it easily or shoot with your weapon while dodging incoming bullets. Both ways, it will be a walk in the park.

You can find the 3 Towers at the end of level 2-1. Make your way to the end and you will find them.
Focus on the one in the middle first as it shoots 3 arrows at once. Stay distant to dodge the incoming arrows easily, then shoot diagonally to destroy the 2 side Towers.

You can find the 5 Cannons at the end of level 4-3. Once you reach them, focus on the 2 on the second line as they shoot a 2-way bullet. Stay distant and destroy them both.
After that, shoot diagonally and destroy the other 3 as well.

This trophy will pop after defeating the last boss in level 5-5.

Survival mode is available from the main menu. Select that mode and be ready to defeat 100 enemies in total.
You will be inside an arena with red spots on the sides and a green spot at the middle: