The Magic Of Toys-To-Life 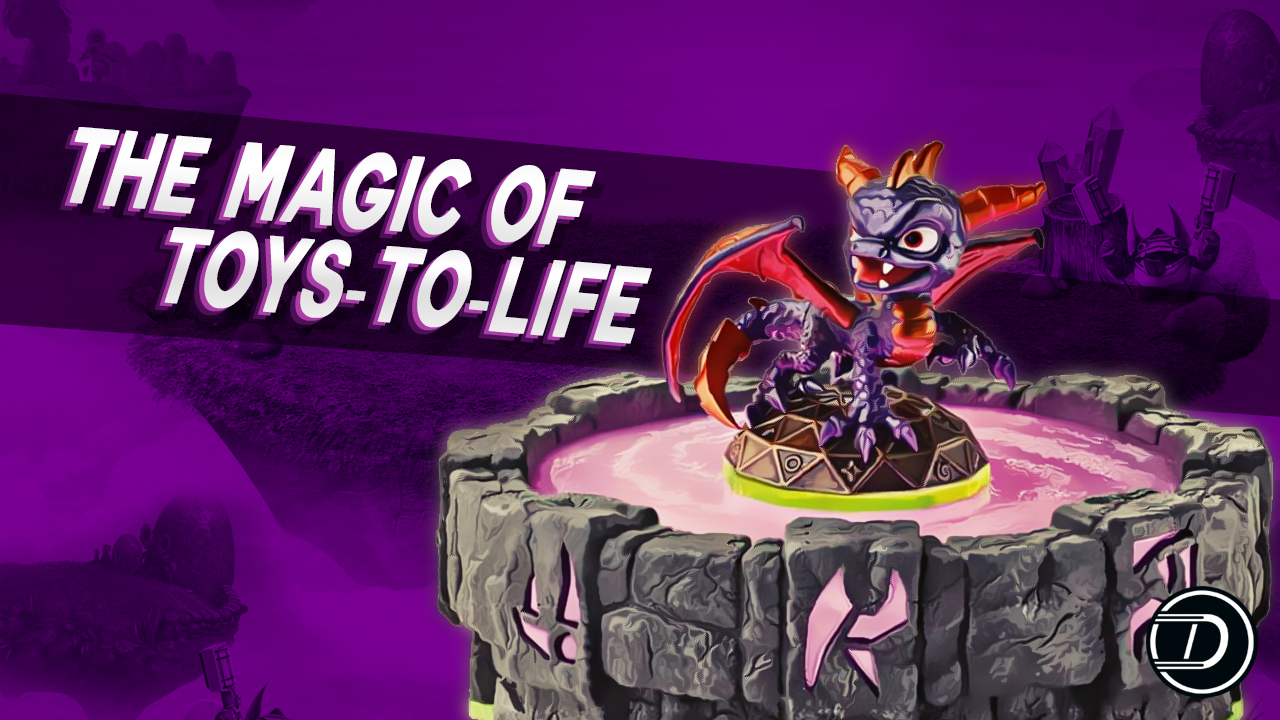 In 2011, Activision released a game by developer Toys For Bob, called Skylanders. What a weird concept it was. You take these figures, you put them on a portal accessory, then they appear as a playable character in the game, so long as they stay on the portal. You can level them up, give them to people to use, and they retain all their skills and money and even levels that they’ve gained in-game! So long as you don’t reset them that is. Little did we know, this would be the start of a fantastic trend. At least in my opinion. When this started, you were in one of many camps. You thought it was amazing, or stupid. You bought every figure you could, and used them all, or just kept them on your shelf. Or you bought them all, and the sight of all the figures collecting dust has made you regret spending money on them, or you’re sad that you don’t get to use them anymore, because Skylanders is sadly dead! (Or is it?)

Now Skylanders began in 2011. But it kept going until 2016, with 6 entire games to play through. Each game brought out a new gimmick of figures, but they were all so high-quality figures. In the second game, you had Giants, which came as giant figures. In Swap Force, you had figures that had magnetic pieces that could swap out with other figures of the same sort. So you could take the top of one figure, and put it on the bottom of a figure, and create a whole new monster! In Trap Team, you had sort of two new caveats. Big figures, kind of like the Giants, and “traps”, that could be put in the portal accessory to “capture” in-game bosses to play as them. Superchargers had racing, and even had high-quality car figures. Even the tires on the toy cars moved! Then last but not least, there were Imaginators. This one was pretty basic though, as the newest caveat was just a character creator, with a “crystal”, where once the character was made in it, it couldn’t be reset.

I know a lot of these just sound like basic things, but at the time, they were game-changing innovations to some already spectacular figures and all-around fun games. They never took themselves too seriously, they always had me smiling, and it was a fun way to just turn my brain off for a few hours a night. Even just looking at them nowadays, the build quality of the figures is so amazing, that they can even be given to kids as play toys! Though I’m sure it was originally marketed towards children or families, a lot of adults really got into the series surprisingly enough. I know I certainly did, and I’m still on the hunt for one of the games, as they have become surprisingly pricey and rare, in a now dormant market. By the end of the life of the entire series, the revenue from it all was even well over 3 billion dollars! 3 BILLION!

The success of Skylanders ended up bringing about more games of the type. You had the likes of Disney jumping in, with the help of the developer Avalanche Software (not to be confused with Avalanche Studios, maker of games like Just Cause), to create their own take on the genre, called Disney Infinity. Though the one thing these games lacked was gameplay and good stories. The first one was just a barren mishmash of worlds, that had a few minigames thrown about, that you could run around in as many Disney characters, so long as you had the figures. Sure they sort of found their foothold, but after 3 iterations of Disney Infinity, they called it quits, after lackluster sales, and the rising cost of figure development. Though I guess you need a good game to entice people to spend money on such pricey figures. This was one of those series that literally no one talked about. A friend of mine only had one of the games, because it came free with his PlayStation 4. That’s how little traction these games had. So it’s no wonder it didn’t last long, when there was no fanbase.

In 2015, another company decided they wanted in on the Toys-To-Life genre. In walks Travellers Tales, the developer behind the acclaimed Lego games. My one true addiction of games. They’re so fantastic to just turn your brain off and smash things to smithereens and are rife with comedy and gags, and fun interpretations of some really great, classic movies. So they created their own game, except with the caveat that you actually get to build everything yourself! So the game came with a portal accessory, that you got to piece together yourself. If you bought level packs or new characters, you got to piece them together. Now this was fantastic, but at the same time, they’re just little Lego figures. So if you’ve ever played with Lego, you know how small they are, and how brittle. So sometimes even just moving the characters to the port accessory, they would come off of their little stand they sit on. Eventually I would just leave them off of it, because all you technically needed was the token, as it was the thing with the chip in it that the portal read.

Lego Dimensions though managed to push its way into the market, more than Disney Infinity ever could. Maybe it’s because Travellers Tales already had a dedicated fanbase, with their silly little games. Or because a lot of people really love collecting Lego figures! I mean, I’m sure it’s both of those reasons, because Lego are awesome, but Dimensions got supported for two years. With new characters to collect, new levels to explore, and more fun to be had, they had a plan for a third year of more figures and levels, but it got canceled due to a decline of sales of already released figures and level packs. But there is a plethora of worlds and levels to play as it is. Ranging from Simpsons, to Ghostbusters, to Adventure Time, to even Midway Arcade! There was a level pack that gave you an actual arcade of PLAYABLE Midway Arcade games! There was also the bonus of, if you had a figure from even just one world, you could unlock that world! So if you got the Krusty The Clown figure, you could use him to unlock Springfield, then roam the streets as Batman! This game was just as big as Skylanders themselves and saw a whole mass of success in what others thought to be a kind of lackluster market. Unfortunately through all my research, I couldn’t find a source that gave me the revenue information for Lego Dimensions, to show you how big it truly was.

The last foray the world saw into the Toys-To-Life market, was when Ubisoft Toronto, decided to try their hand at the genre, and made “Starlink: Battle For Atlas”. This was also the last time the Nintendo side of gamers saw an adventure with Star Fox in it, as he was one of the main figures that were in the Nintendo Switch version! When you bought the game, you got a mount to stick on your controller, and then you got a spaceship, with detachable weapons you could on, or take off, and it would resemble the in-game ship you’re piloting. The weird thing about this game though, is that it was also released digitally. Which to me, kind of makes it lose its magic, considering you’re no longer interacting with the figures themselves. Although the game was pretty well received, the game still managed to fall short of Ubisoft’s sales goals, so not even 6 months after launch, they announced they were no longer making figures for the game. Though to be fair, there wasn’t much to begin with. Maybe at this point in time, the world has moved on from the Toys-To-Life fad, or it’s because a lot of Ubisoft games have become the same thing, just with a different coat of paint. In all honesty, I don’t know. I do have the game on my shelf, but I have yet to play it, so I don’t have a better answer for you. One day I will, but that day is not today.

Now I can’t talk about Toys-To-Life games or figures, without talking about the biggest juggernaut of them all. Even if you don’t play games, I’m sure you know what they are, or have a friend whose kid has one, or even seen commercials with them in it. I’m talking about Amiibo’s. Now I’ve talked about how the build quality for Skylanders figures are exceptional. But Amiibo has taken it to a whole other level AND they are still being released to this day! Nintendo has the market cornered with these figures. The second a new one is revealed, the pre-orders sell out almost instantly, or the shelves are cleaned dry the second they hit them. People have hundreds of these things. Re-releases, redesign, more than one so one can be played with, and one can be packaged. People go absolutely bonkers for these, even though most of them can only be used in Smash Bros. But then again, Smash Bros is also one of the IPs Nintendo has that really helps push consoles off of shelves. You can’t even think of Toys-To-Life without thinking of Amiibo. Although if you’re not in the gaming sphere I’m sure you can. But no IP, not even the Granddaddy of the genre, Skylanders, can even come close to the amount of revenue Nintendo makes off of Amiibo. We’re talking millions of billions each and every year! Some games even get released with Limited Edition amiibo. Like Zelda Twilight Princess for example! What I wouldn’t do for that figure.

How I would love for Toys-To-Life to come back. I would love to get a new Skylanders game after it has been gone for 5 years. Sure I still have one to play and one to buy, but these games, and figures make me feel young again. Like a child with a big imagination. I miss having an imagination that could entertain me for hours on end. But this genre helped bring me back to remembering simpler times. But unfortunately I don’t see that happening, as Toys For Bob has been relegated to other things. After they made the critically acclaimed Crash Bandicoot 4, Activision now has them developing content for Call Of Duty. So we saw the inventor of the genre, losing the ability to make the thing they created, and are instead tasked with keeping up with the current trend. So for now, Toys-To-Life is all but dead, with the exception of Amiibo, if you consider them in the genre. Here’s hoping one-day Toys For Bob can return, or another company decides to take a shot and ends up successful, because we need that. The ability for imagination to take true form, to make people happy, and as I said, Skylanders managed to do just that.