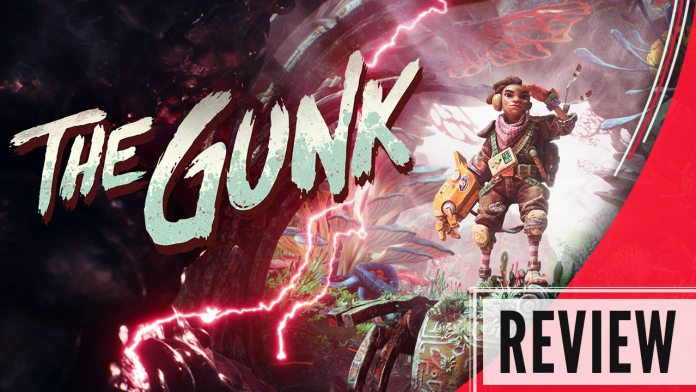 The Gunk is an action-adventure video game developed by Image & Form and published by Thunderful Publishing. The game was released on December 16, 2021 for Windows, Xbox One and Xbox Series X and Series S.

I had a ton of fun with the game for the duration of it. But for a $25 game, it is a little bit short with a completion time of around 4/5 hours. Luckily the game did launch of game pass, and this is one of those games that really gets a good shot in the spotlight because of it.

The story of the game is good but I felt like I missed some of the story before the game even started. But that does give the game an option for a prequel game with a totally different concept, because “The Gunk” really did fit within that story of the planet the story takes place.

The gameplay of the game is pretty basic, but the way the game plays does feel unique in its own way and is a lot of fun. The basic premise of the game is that you remove all the Gunk from the planet, easier said than done of course. Every time you remove all the gunk from an area that part of the map will spring back to life and will spawn some materials that you can suck up to upgrade your gear.

There are only 3 types of enemies, there is not much to them, and didn’t really feel like a danger when encountering them, but more like an annoyance than anything. I would have liked to see a few more types of them because especially the one that shoots explosives became annoying very quickly.

Visually I was really impressed by the game. It has so many cool set pieces and areas to explore and the surrounding area just melts you into its world. There are only a few living things, but they all fit so well into the world they created and one of the local animals you see just looks stunning.

The world can get a bit dark sometimes and your screen will be filled with Gunk. I do wish it showed off more of the colorful world instead of the dark and gloomy, especially near the end when everything is just darkness.

While the game is amazing, the $25 price tag is a bit much for the game time you have. This game being on game pass does make it more worth it. The time you spend with the game is going to be a fun ride throughout the whole game with not a moment of boredom. While the game is pretty linear it starts to feel more open the more you progress through the game. Overall I'm sure almost everyone that plays this game will have a great time saving the planet of the gunk.The Gunk Review (Xbox One)