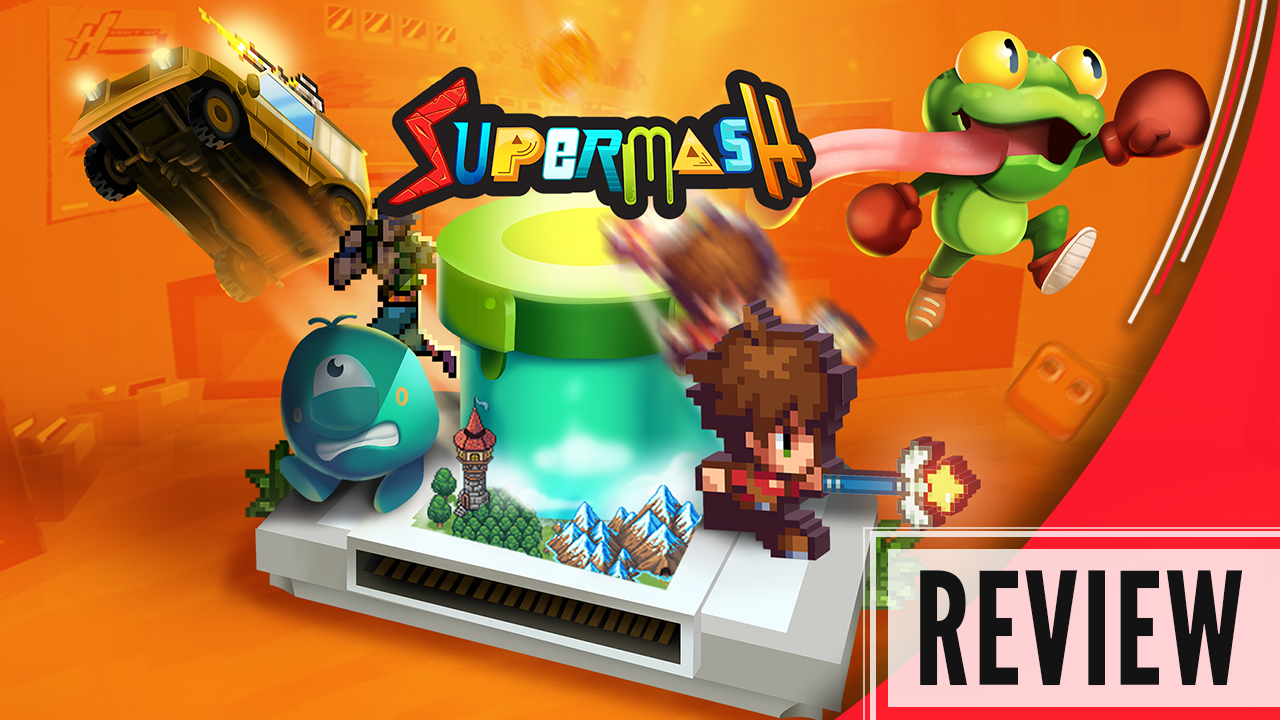 SuperMash was developed by the indie studio Digital Continue. It was released in December of 2019.

SuperMash is a very strange game. The whole premise is that you and your sister run a game store, and the landlord has sold the building, so you’re about to get evicted. So you end up finding an old console called “The Playtype”. It has the ability to mash together two genres into a single game. So you fight to try and save the money to move to a new area for your game store!

The story itself is a bit lackluster. You fight to survive, and then you get some story events between each objective. As with most games, yes. But these story bits feel like they go nowhere. At one point someone says they’ll do art design for the games you make, and then you’re tasked with playing 3 minigames. Or at one point your store is broken into, so you’re tasked with playing 10 minigames. The story has a good premise to it, but unfortunately, it wasn’t executed well. There’s no highs, or lows, and if anything, there’s maybe only 20 minutes worth. Then to top it all off, the game ends on a cliffhanger for a possible sequel! Just as you’re getting pulled into some deep conspiracy territory too! Though it’s hard to say if there will be one, because through all my research, I never found news of one.

Although in terms of story, the game itself was more built around the gameplay of mashing two genres together to make silly little minigames. You can have just a straight-up JRPG, that can be long and easy, or short and hard. Or you can have a platforming JRPG that can end up giving you an ATB Gauge for your ranged attacks. It was really silly at the possibilities that could happen. Plus when you complete the minigames, or “Mashes” as the game calls it, you get little Dev Cards. You can use these to add silly things to your game! So at one point, I mixed Shoot ‘Em Up and Metroidvania, and I chose to be a plane from the Shoot ‘Em Up genre, flying around a Metroidvania level! You also get the cards from doing side quests for “customers” of your shop, or using some in-game currency at a ball prize machine. But this currency comes fast, as the Mashes are only a few minutes long each. I had one last 3 seconds!

Although unfortunately, when there are ups, there are bound to be some downs. With only 6 genres to mash together, you’re bound to run out of ideas. The genres are Stealth, Action-Adventure, Shoot Em Up, platformer, JRPG, and Metroidvania. Unfortunately, the game itself only has a set amount of objectives per minigame. So you’ll find yourself doing the same things over and over, which unfortunately gets a bit tedious. Throughout the story, you’ll be tasked with filling up a book’s contents, with each genre. So play a platformer in all of its possible areas. Unfortunately, the environment that gets created for your minigame is random. So sure the book only has 4 entries for possible level layouts, but you may need to play 10 mashes to be able to fully see them all!

Then each Mash has what are known as “glitches”. Depending what difficulty you set for the minigame, there are good and bad ones. If you get certain cards, you can choose what good ones you want. So early on, I got an unlimited use card, to let me have respawning health in any game I wanted! Then it would be the matter of, what makes it happen? Do I kill an enemy? Do I stand still? Do I jump? It was fun finding out! But at the same time, the game can also give you “bad” glitches, and these have the possibility to literally make the minigame unbeatable. There was one minigame I had in the Action-Adventure genre, where every time I did an attack, the enemies would heal. So I was tasked with killing an enemy, but he was literally invulnerable. So I had to exit, and restart it to get another roll of glitches.

Although least with the annoyance of everything, all the genres look absolutely old school. So it feels like you’re playing NES again. Stealth looks like Metal Gear. Action Adventure looks like Zelda. Well I don’t have to tell you what the others look like, but it felt like an excellent homage to retro games! Even the 8-Bit Chip Tunes are fun to hear!

The cool thing is, if you make a really fun Mash, you can save it, then give it to your friend to play, via a code, so long as they have the game as well! Though if they didn’t, you could always share play on Ps4! I feel like this would be one of those games that is stupid fun if you had a friend or two, over for drinks, and you just make minigames for each other until you’re bored. So it would be a great party game if anything! Unfortunately I didn’t have the opportunity to try this, to confirm nor deny it for you all.

At the end of the journey though, the game seemed to crash. A lot. Sometimes when I’d start up a Mash, I’d get hit with an infinite load screen. Sometimes 3 times in a row! So I had to quit the game a lot. I also noticed when I did random trophy requirements, the game would crash after the mash, as opposed to giving me the trophy. Which for trophy hunters, that could send them up the wall! Unfortunately I don’t ever see these things being patched by now. So be careful.

I had a ball with SuperMash for the first 5 hours. It kept me smiling ear to ear. But then when I got to the more tedious story objectives, I got bored, and annoyed. Especially when at the end of the day, the story didn’t reallllllly go anywhere, and there was only a small amount of genres to mix. I wish I had a friend to hand off the controller with, while we made minigames for each other. I feel that would’ve brought extra fun to the game. So I would use this as a party game, as opposed to a single-player experience. But if a sequel gets made, I’ll probably play it!l, because that cliffhanger got me interested!