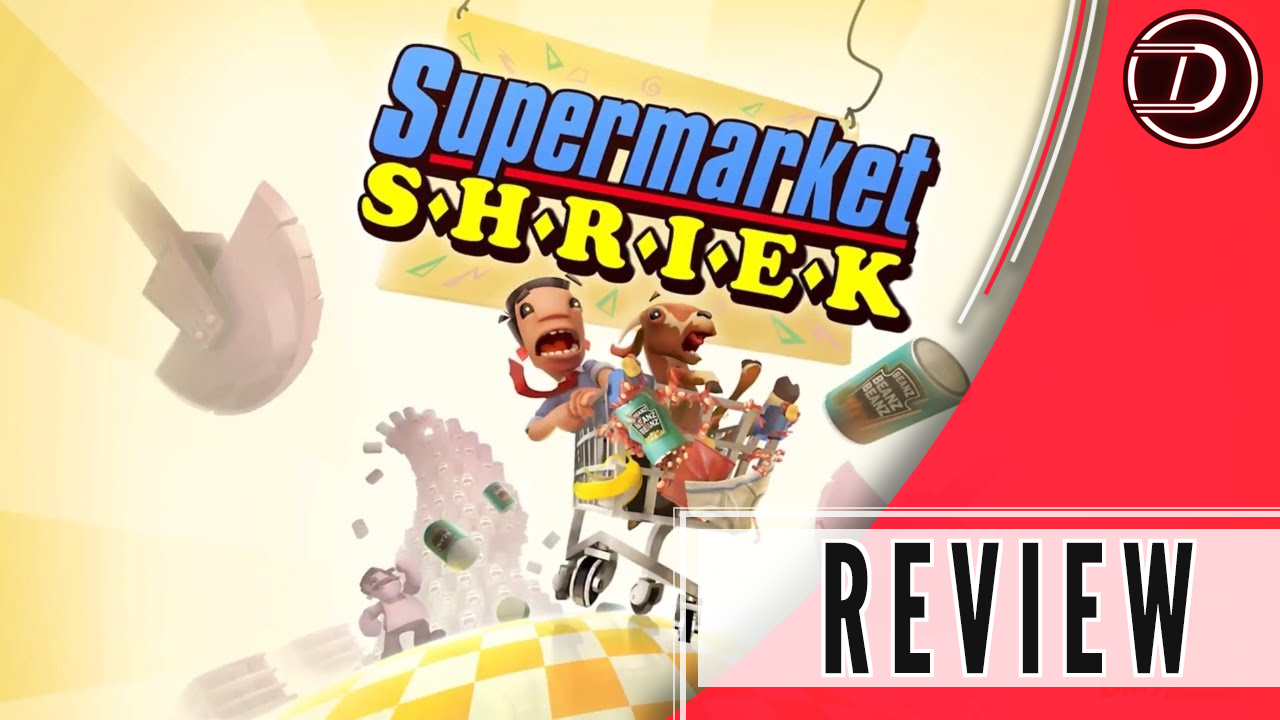 Developed by Billy Goat Entertainment Ltd and ported to consoles by PQube Limited, Supermarket Shriek is described as a “A Kart Racer Like No Other” and boy are they right! What is it all about? Let’s have a look in our review below.

If you watched the above announcement trailer, hopefully you will be more intrigued into what this game has to offer…?! A Man and a Goat screaming, or “shrieking” is something that I thought I would never see within video games, but this is why I love Indie Developers; they never cease to amaze me with their creativity.

What is the aim of the game….? It’s a racing game with a difference! Race through the shopping aisles in a variety of different environments that each come with their own dangers. Supermarket Shriek is an addictive, fun filled challenge, that brings to life the inner child with it’s hilarious ideas and cooperative racing.

The gameplay is simplistic, but intuitive. Introducing you to the game with some sort of tutorial, or in this case a “Driving School” is in my opinion one of the best things you can do when you are releasing a game that has somewhat slightly strange controls.
You control the shopping kart with the

buttons that control your boost from that relevant side, thus giving you the ability to steer in either direction towards the end goal of the shopping checkout.

A lot of effort has gone into this game. The attention to detail is there to see in backdrops, but also in the main player part of the game where the movements of the characters are portrayed incredibly. If you look close enough you’ll be able to spot the facial expressions changing as you race around the shopping aisles and the labels of the products on the shelves.

It really does look impressive in it’s simple things that are done right. Unfortunately I had issues with the constant shrieking, which is a shame as it’s to be expected with title of the game, but to me it did get annoying very quickly.
I don’t know what else that could’ve been different in this area, but the option just to turn this particular effect off would be good for me.

The rest of the effects were nice; the team were successful in bringing the crashing a clanging effect of the shopping cart hitting the shelves in a brilliant way.
A subtle soundtrack in the background was also something nice to have. I’ll nearly always take a sneery peak a trophy list before starting a game, but with this one I actually went in blind.
We are given a generous trophy list on this one; with 42 trophies available (including of course that coveted Platinum Trophy), that require a variety of techniques and challenging sequences to achieve.

You’ll need to achieve 3 Stars in all levels to achieve the Platinum in this one, so it is not going to be the easiest of games to get the 100%; it will however be a really fun one to try for.
Also, don’t forget you’ll actually need to play this game on a Tuesday to earn one of those trophies…. Supermarket Shriek is a lot of fun and will have you laughing and pulling your hair out all at the same time. The challenge that this game provides is the sort that will have you coming back for more, or telling yourself “just one more try” before giving up for the day.
Playing in cooperative mode is even more fun for those that have someone to share this experience with, as it adds to the fun and frustrations.

I highly recommend this game to those that enjoy the racing genre, and enjoy a challenge!

Don’t forget you can check out more of our Gaming Reviews! – Want us to Review your game? Why not get in contact?