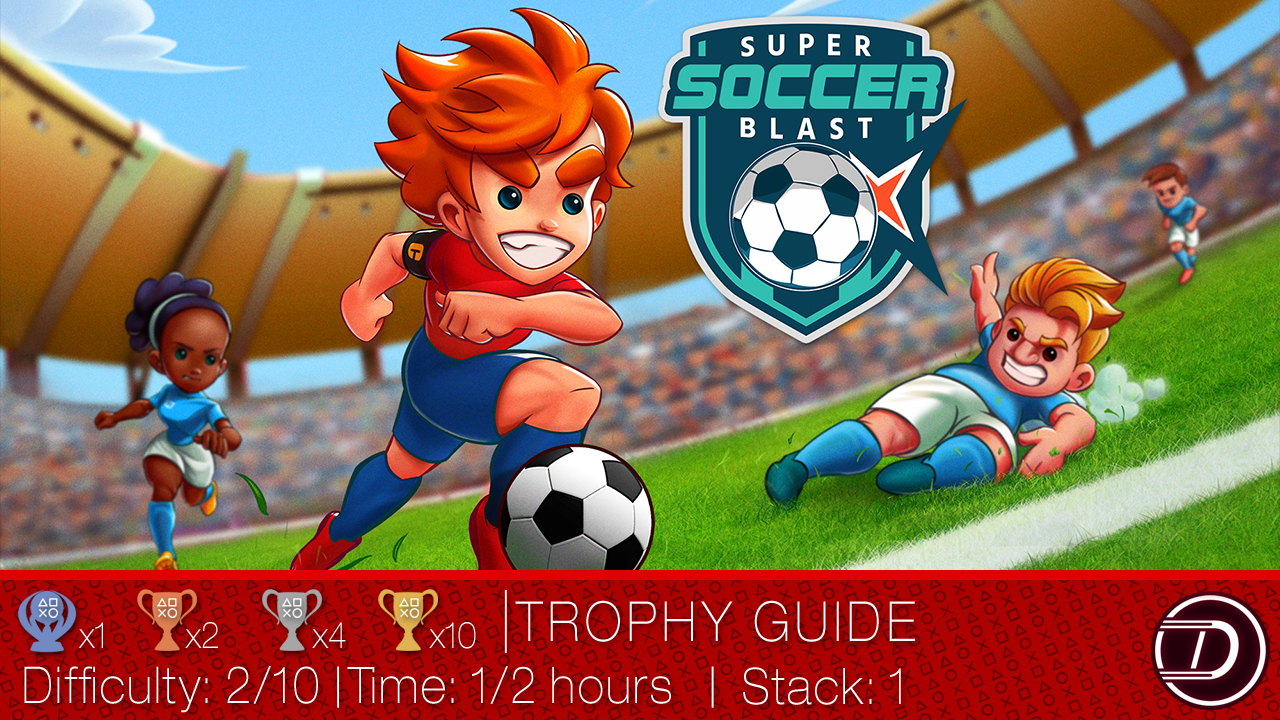 Welcome to the Super Soccer Blast Trophy Guide!
Super Soccer Blast is an old school style Soccer (Football) game that has some brilliant arcade styling. It has been brought consoles by Unfinished Pixel and the game others a lot of fun with an extremely easy trophy list!

Step 1: Win a custom tournament
Use this as an introduction before heading into the most time consuming part. As detailed below, this is as simple as setting up Knockout Tournament and winning the 2 matches needed for the Competition win.

Step 2: Win all World Tour tournaments
Fortunately we are able to simulate matches to win these tournaments…. You may be able to get lucky and win the knock-out ones this way, however, I would only suggest doing this in the league style tournaments when you are mathematically guaranteed to win.

Step 3: Miscellaneous Clean-Up
Most of the below trophies will be earned automatically while progressing through the Would Tour. There are however a few for changing up you Avatar & Team, so head to the relevant trophy descriptions if you are missing any at the end of the previous steps.

All trophies can be obtained on Very Easy AI Settings, so this should prove no problems for most players.
The miscellaneous are also not restricted to a specific game mode and can be obtained as you play along.

the whole time, as there is no stamina within the game and the sprint is a lot quicker than the normal run. Holding

when you are not in possession is also a great way to get the ball back.

When you are a few goals up in a match and in possession of the ball you will be able to stand just within your own keepers’ box without being tackled for a good while; this is great if you are simply trying to run the clock down.

Control wise you have the option to change between the 2 major football game franchise controls to best suit your playing style. Obtain all other Trophies.

From the Main Menu head into “Play” then “World Tour”.
Play any of the 5 tournaments available and win your first match.

You will earnt his automatically on your way to

You will obtain this after winning your first “World Tour Tournament”.
See

You will obtain this after winning your third “World Tour Tournament”.
See

From the Main Menu head into “Play” then “World Tour”.
There are 5 “World Tour Tournaments” that you will need to win and they can be played in any order and vary in length by games to compete in.

As outlined in the Roadmap, you can simulate individual matches to speed this process up.

Best. If played on Very Easy you could easily hit double figures of goals per game.

If you decide to simulate most of the league matches in the World Tour, then bare in mind when playing your knock-out style ones that you will need to net a lot of goals per match to reach the 100.

With the AI settings to very easy you should have no problems with this trophy.
All teams in the game operate a 4-3-3 formation, and therefore it  tended only to be one main striker in the box when I played it forward, or crossed the ball in.

Just make a note of the player that you score the first goal with and then always try to pass it to them when in the opponents half of the field.

This trophy will pop at the end of a match if you have managed to score 5 or more goals. You do not need to win by five goals for the trophy and it can be achieved in any of the game modes.
As with everything else, set the opponents to Very Easy and you will have no problems.

A little bit tricky as this can be put down to a little bit of luck. Most of the time when you cross the ball in your playing will head it towards the goals, however if you are able to angle it slightly behind them you should pull off this overhead kick.

Have a little look at this clip for pointers, if you struggle with this –

A slightly luck based trophy, as there is no real way to direct the shots towards the woodwork. I found that I had more success when I was taking shots from just outside the keepers’ area whilst running at an angle towards the posts suing the grass as a good line of measure to angle the shot. Don’t get frustrated if this one doesn’t pop after a few matches, as there is a good number of matches to play for

From the Main Menu head into “Play”, “Custom Competitions” then New Competition.
The quickest competition available is the “Knockout” style one that can be completed with a minimum of 4 teams.

Once you have created the tournament you will need too select it from the options and then compile your settings before heading in. In this format you will need to win 2 matches for the trophy, which is as easy as it can get with the below settings. I trialled simulating the tournament a few times, however, another team always won it. I did managed to simulate the first match and then actually play the second, which resulted in a tournament win and the trophy.

You therefore can grab the trophy by simply play one match.

From the Main Menu head into “Custom” then “Avatar Editor”.
You’ll only need to make a single change to any attribute and then save you new character via the “Save As” for this simple trophy.

From the Main Menu head into “Custom” then “Avatar Editor”.
After finalising your character for

My first creation, proceed to use “Save As” four more times and change the name of character every so slightly (I used Dino Roar1, Dino Roar2 etc.). There is no need to make any changes to the character in between the saves, as long as the save files are named differently. From the Main Menu head into “Custom” then “Team Editor”, then click on “New Team”.
The trophy will unlock as soon as you enter the next screen. There is no need to make any changes.