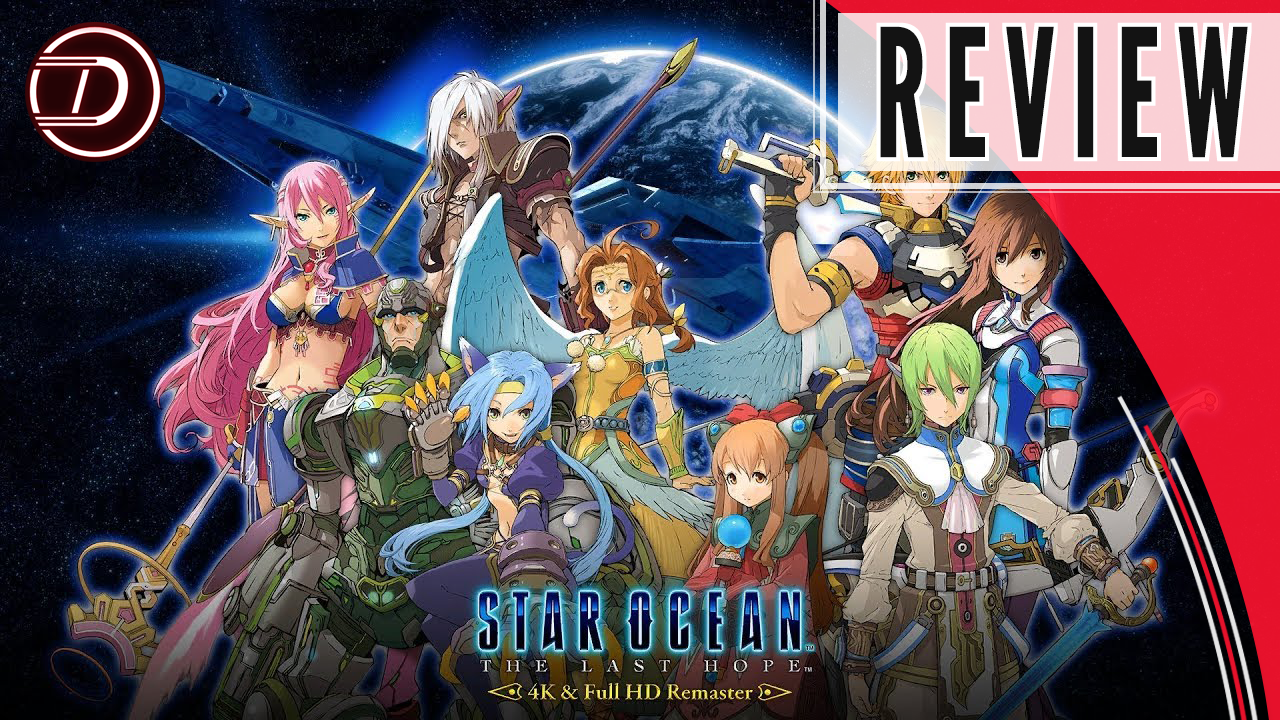 Star Ocean The Last Hope is the 4th entry in the series. Acting as the first game in the universes storyline. This game was developed by Tri-Ace and published by Square Enix in 2007 as an Xbox360 exclusive. It only later came to PS3 in 2009, with the “International” title slapped onto it. It later came with an HD & 4K Remaster on PS4 in 2017!

You are Edge Maverick. Accompanied by your best friend Reimi, you’re part of an Earth organization sent out to look for hospitable planets. World War 3 has left Earth damaged and broken. No one can live there now. Not even nature. It is time for the world to look above and beyond, into the great….Star Ocean!

This game is fantastic. It’s story starts off strong and stays strong for the 40 hours that it takes to get through the sprawling journey. That’s not even talking about all the side stuff. But we’ll get to that later! You visit so many locales, get so many party members. This game has so much variety and side content to keep you have for hours! 500+ hours to be exact!

I couldn’t put this down, and when I had to I was sad about it. There was always something to look forward to. Or levels to gain. I even cancelled some game nights with friends to play this! The only thing is, at 2am, after I’d been awake for so long already, the 40 minute cutscenes made me pass out sometimes. But, even though that happened, it easily became my favourite Star Ocean game!

Now, if you’ve ever played an Action JRPG before, this will feel familiar. When you’re in battle, you fully control your character. From moving to dodging to healing. All of it. When you’re not controlling them, the AI is. Then, there’s the vast landscapes to explore. Dungeons and some small towns. There’s side quests galore! You get these just by interacting with the NPC’s. That cat in the corner? Talk to it. It could have a side quest for you, where you need to gather herbs or fish or take it to its master! You never know!

In the game, you have the choice of creating a party of 4, out of a possible 8 characters. You can use all magic users. All melee user. Mix and match. There’s so many possibilities to make your game easier or harder. It’s all on you! Then each character has 100 in game achievements tied to them, called Battle Trophies. If you’re a true masochist, you can try and get them all! But I warn you. It’ll take a long while!

In battle, it unfortunately turns into the same rhythm. Run into the enemy, kill it, get EXP, level up, rinse and repeat. There’s some thing you can do to get extras though. Like extra EXP, or Money, or to heal after battle. It depends if you kill 2 enemies at once, or get a kill with a critical hit. Now the coolest thing, is if you get into battle with one enemy, and you’re around others, they fight you instantly after! It’s called getting Ambushed. Luckily, there’s incentive to set these up. With a ton of extra EXP bonuses!

Now, a JRPG wouldn’t be a JRPG without a ton of bosses! This game has them. The nice thing is that these bosses aren’t your normal boss fights. So instead of smacking away until they die, you have to figure out WHEN to attack. They may only take a ton of damage when summoning other enemies. Or just after they attack. Or you have to get behind them to their weak spot! It was so wicked! So every boss fight kept me on my toes, as I figured out the way to defeat the boss.

You also can’t forget the dungeons. There’s plenty of these too! From caves, to military bases, to mausoleums. Unfortunately, there’s basically no puzzles in these. So you’re never being tested with normal JRPG mechanics. The dungeons are also an hour long usually. With a save at the beginning…..and the end! I hope you set up time to do the dungeon in one run! You have no choice!!!!

Considering I played this game on PS3, it doesn’t look that good. The draw distance is terrible, the mouth sync is off, and once the camera zooms in on faces in cutscenes, there’s the weird smooth skin looking textures that doesn’t look good. But, the special moves, and enemies look great! You also get sci-fi jazz type music in some spots. With the drip drop of cave areas. Happy music while you’re in town and villages. Now if only I played it on PS4.

There’s a ton here, yet there’s not. There’s 4 different difficulties to try. A ton of post game content you can try on higher difficulties, and Battle Trophies. The Battle Trophies themselves will take you multiple runs, focusing on specific characters each playthrough, so it gives incentive to play again. But at the same time, playing the same dungeons and story can get a little old.

I couldn’t get enough of this game! I know a lot of people think 500+ hours is a con to a game for doing it all, and I know I labeled it as one, but I’m excited to do it all, even if it makes me hate it! I can’t wait for the challenge of Very Hard, all the side quests, trying all the companions in battle. If I had to recommend one Star Ocean game, it would be this one. Though I may suggest it on PS4. This game is a must-play for ANY JRPG fan!

We use cookies on our website to give you the most relevant experience by remembering your preferences and repeat visits. By clicking â€śAccept Allâ€ť, you consent to the use of ALL the cookies. However, you may visit "Cookie Settings" to provide a controlled consent.
Cookie SettingsAccept All
Manage consent