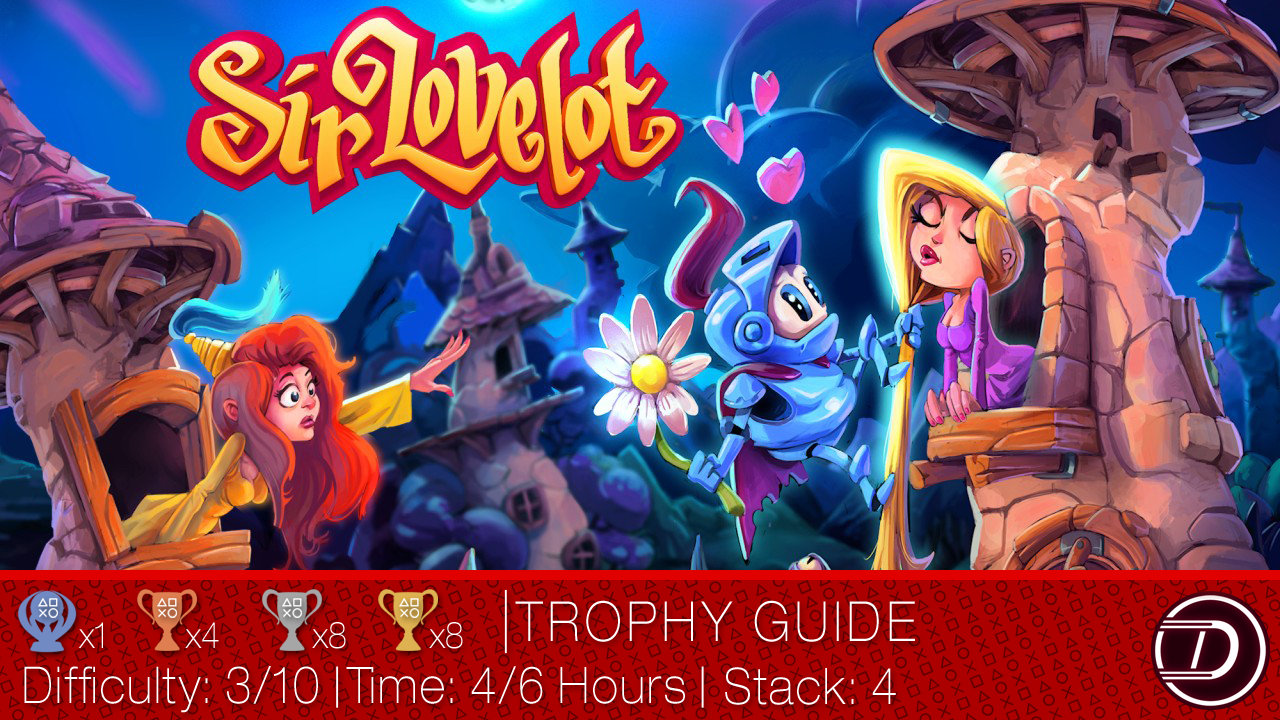 Welcome to the Sir Lovelot Trophy Guide!
Join Sir Lovelot in this wacky platformer, where impressing cheeky damsels is harder than a heart of stone!
Roam the four corners of Lululand, from castle to castle, to find the love of his life!

Step 1: Complete the game
During this step, your main focus is to complete all the 42 levels of the game.
Take your time to explore each level as they contain secret paths that can make them easier to complete.
While exploring you might also find some collectibles around the various maps so you are more motivated to play this game without rushing it.

You’ll be earning these trophies for sure:

Step 2: Cleanup
This step can be done during step 1 or as a separate one after completing the game. Also, you can complete a level and redo it immediately after to find every collectible you have missed.

Note that some trophies might have been unlocked during step 1. However, at the end of this step you should have earned all of these:

This trophy pops at the end of the first level of the game. Collect the flower on the far right and reach the house at the top of the stairs.

You are obliged to collect the daisy to finish the level.

Jungleland is the first area you will visit. You will unlock it while progressing on the game.
This area is composed of 11 levels in total.

Coins are scattered through the various levels and you can also obtain them by shooting at the lanterns around the various areas of the game.

Once you have collected a total of 100 coins, you will get this trophy.

Nasties are all the enemies you will encounter throughout the various levels. You need to shoot them by pressing the

To get this trophy, you have to reselect whichever level you want and replay it.

Dying is very easy in this game due to the not real perfect platform mechanics and controls. Also, the game is full of traps and sometimes it’s better to die instead of repeating a whole section.

To get this trophy, you only need to shoot at one of the lanterns or torches around the levels of the game.

You can start finding diamonds when you reach Spookyland, the third area of the game.
As for the geese, these collectibles are hidden behind secret walls you can only find if you step against them.

There are a total of 20 diamonds, one on each level, but for this trophy, you only need to find and collect 5 of them.
Below, you can find a video that shows the location of the first 5 diamonds:

Swampland is the second area you will visit. You will unlock it while progressing on the game.
This area is composed of 11 levels in total.

This trophy will pop after diving into the water for the first time.
You will automatically unlock it on the first level of the swamp area.

This trophy can be easily unlocked in the first level of the game which is the easiest one.
Start it and try to complete it without dying.

Geese are hidden in the various levels of the game behind secret walls. There are 113 of them in total but for this trophy, you only need to find and collect 50.
To find a secret area where these collectibles are located, you need to run towards each wall on any level. Some of them are straightforward to the end of the level, others require a little bit more exploration.

Every level has its own number of geese/collectibles you can see before starting it.

Below you can find an amazing 105% playthrough with all the collectibles of the game. Also, there are all the timestamps needed for reference in the description (Credits to Greenalink for the playthrough).

Spookyland is the third area you will visit. You will unlock it while progressing on the game.
This area is composed of 11 levels in total.

The first secret Treasure can be found in level 9. Right at the beginning of the level, head left and jump down to the cliff while keeping close to the wall to find a secret passage.
Now proceed right until you see 2 towers in the background.

Here, In the middle of the area, you can see a little orange object: stop there and go down to discover a stair with a secret room with the Treasure inside (you can also hear a money sound).

Check the video for a visual description.

This trophy will pop either when you press the pause button or quit the game to take a break.

Lollipops can only be found in Volcanoland, the last area of the game. You can find one of them on each level and they are not hidden like the other collectibles.

There are only 9 of them and can only be found in Volcanoland levels. If you can’t find them by yourself, you can check the video from min 41:33 in the

Volcanoland is the last area you will visit. You will unlock it while progressing on the game.
This area is composed of 9 levels in total and the last one is the boss fight against the fire-spitting dragon.

You need to collect a daisy in each level of the game to be able to complete them, so this trophy will pop after completing 40 levels in total.

The fire-spitting dragon is the final boss of the game.

Once you reach the boss area, try to kill the two snails first then focus on the dragon.
Don’t worry if you die as you will keep all the progress you have made and the health of the dragon won’t reset either.

The best strategy to kill it faster is to jump on the bridge in the middle of the arena as soon as you enter. The dragon will fly towards you and he will shoot some fireballs at you. Dodge them while shooting at him then jump left as soon as he stops spitting his fireballs.

There’s a 90% possibility that the fallen rock on the left will hit the dragon, causing him massive damages even if you die.

Here you can find a video that shows this strategy.

This trophy will unlock after saving the princess on the last level. You will also complete the game.