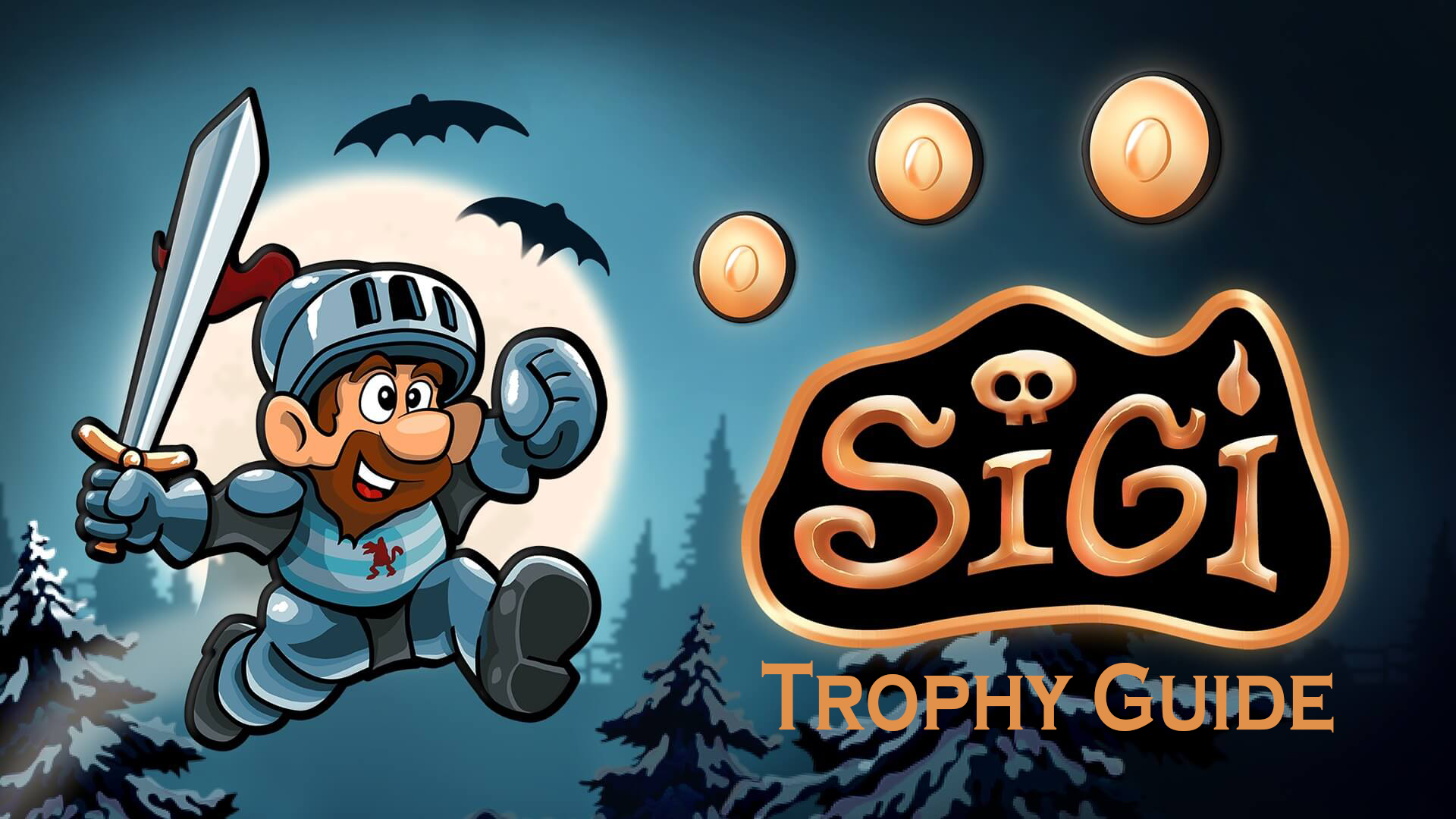 Welcome to Sigi: A Fart for Melusina Trophy Guide!

Sigi: A Fart for Melusina is developed by pixel.lu and was originally designed for Android, but has been ported onto consoles by Sometimes You. During the game you control “Sigi”, the heroic knight that is trying to save Melusina from the clutches of the evil “hordes of goofy enemies and crazy bosses”.
From the title you can tell that this game offers some humour to go with the 8-bit pixel graphics as you battle your way through 16 linear platforming levels, as well as 4 evil boss levels.

Sigi has a number of ranged weapons at his disposal, which can be obtained via in game collectibles.
Overall this game is quite fun, despite the lag on the Vita version and can be completed in under an hour. There are no missable trophies, as Level Select is available throughout the game and at least half of your trophies will come through natural gameplay.

Step 1: Play through the story
If you decide to “Play for Fun” first you will unlock a number of story related trophies. Although this is not a requirement, I highly suggest that you do take the time to play the game without the use of any video guides etc. just to get used to the mechanics of the game and how it all works.
I would also suggest this step as initially the bosses seem hard to beat. It will be beneficial to have beaten them before when you do go for your 100% run.

You’ll be earning these trophies naturally through gameplay:

Too blind to see

Step 2: 100% Run
Despite the description the 100 % run is not as difficult as it sounds. There is no in game timer for the “under 30 minutes” requirement, so you will have to judge this yourself.
For the Vita version there is a glitch if played on v1.00, where the timer is only running whilst “in levels”. It also begins to count backwards when you pause the game.
To achieve this trophy you will need to find all “S.I.G.I” collectibles within each level, the Apple & Golden collectibles and all the hidden caves.

Step 3: Clean Up
If you decided to go with Step 1, then it may not be necessary to complete this step; however if you just blasted through the levels, then you may need to collect some more coins. Coin collectibles are cumulative, so for this step simply select any level and replay over and over if required.

Sigi – A Fart for Melusina Platinum

Earn all other trophies to get this one.

Sigi will naturally “fart” numerous times whilst playing through the game when you collect a piece of food; however for this trophy he will need to fart at Melusina directly. This will happen upon your first meeting with Melusina automatically in the introduction level.

Cumulative across all playthroughs and levels; however there is no in game counter. You will meet more than enough for this to unlock mid level when you have killed your 100th Zombie. The Zombies can be killed by either a weapon or by jumping on their heads.

This trophy will pop after defeating the final boss, if all caves have been found in all levels.

This trophy will pop after defeating the final boss, if all letter icons have been found in all levels.

Cumulative across all playthroughs and levels; however there is no in game counter. There are numerous coins within each level, with 2 versions offering different amounts. The larger coins will offer 10, with the smaller ones counting as 1. If you do not collect enough coins during your initial playthrough, then simply replay any level until the trophy unlocks mid level.

Located within Level 6 after finding the hidden cave and collecting the “G”. You will need to fire at the “nut” at the base of a tree a number of times for the Golden Grail to appear. Located within Level 19 after collecting the “G”. The crown is at the top of a concrete structure and will require to be fired upon a number of times before it will appear. Located within Level 18 between the “I” & “G”. The Talisman appears after firing upon the chimney of the spooky looking house. Located within the hidden cave of Level 19. This is directly after collecting the Golden Crown

. Once inside the cave, you will need to jump up and go through the Waterfall to find her. Story Related – Blind John is your first boss within the game and is located within Level 5.
In order to defeat John you must shoot him whilst he is dizzy from running into the walls. John will run from one side to another and repeat; he will also fire one shot at you when he has recovered from his dizzy spell. Simply jump over John whilst he is running at you and wait for him to hit the walls. You will also be joined in the fight by some Zombies/Birds, however these can be ignored if you choose to.

Story Related – Whistle blower is your second boss within the game and is located within Level 10.
In order to defeat him you must shoot the weak point of his Steam Cart which is located at the top of the carts’ chimney. The boss will charge at you from the right hand side, leaving just enough space on the edge of the platform for you to not get run over. He will then move slowly back to the right, giving you the opportunity to follow him and shoot the chimney. When he is on the far right move back to the left hand side and wait for your opportunity to shoot, as he moves slowly back to the left. You will also be joined in the fight by some Zombies/Birds, however again these can be ignored if choose too.

Story Related – Chips is your third boss within the game and is located within Level 15.
You will need to jump between the left and right side platforms whilst they are in the down position and fire at Chips who will be located within the centre platform. Keep jumping between the 2 sides in order to be at the right height to defeat him. You will again be joined in the fight by some Witches/Birds, however again these can be ignored if choose too.

There is also a trick to defeating Chips if you feel confident enough and have some lives to spare. You can simply jump onto the platform that Chips is on and fire at him. You will lose some lives this way, but it is a damn sight quicker (and easier in my opinion) to do it this way.

Story Related – The final boss within the game is located within Level 20.
Without doubt the hardest boss in the game. You will need to defeat the Hulk Hogan lookalike by firing at him whilst his back is turned. This boss has 2 different attacks in the form of a fire shot and circular disks at floor level.
Learning the pattern of the arm movement is critical in this fight, as they will tell you what your enemy is about to do. When he jumps in the air you will need to walk under him and then turn and fire. As for his attacks, you will need to be far enough away to avoid the fire shot and you will need to jump over the circular discs when they are rolled towards you.

I found that being close to him was the best way to defeat him, as you are given very little time to get underneath the jump before he lands on you and takes a whole life away. This does of course leave you open to getting hit by the fire and the discs, however as you should have multiple lives remaining by the time you get to the final boss it should not matter if you lose a few.
You will again be joined in the fight by some Witches/Zombies/Birds, however again these can be ignored if you choose to.

Story Related – This trophy will automatically unlock during the dialogue shortly after defeating the last boss.

Located at the beginning of Level 16; the Apple is in plain sight hanging from a tree. You will need to jump up and collect it in order for the trophy to register. To achieve this trophy you will need to find all “S.I.G.I” collectibles within each level, the Apple & Golden collectibles for the relevant levels and all the hidden caves. You will also need to do this within 30 minutes of gameplay. There is no in game timer so you will have to judge this one. The 30 minutes is quite generous and you can level select to get a collectible after completing the game if you did miss one.

All levels excluding the boss levels have collectibles within that spell out the name of SIGI. Most of these are in plain sight and will not prove to difficult to find. You are also given a display of what letter you have collected within your screen. Some letters however are located within the hidden caves.
For the hidden caves you must find them all within the relevant levels. Again all levels excluding the boss levels and Level 17 have hidden caves within. The caves themselves are marked with the level by a small “x”. These are fairly difficult to spot, so I would suggest memorising the locations of the caves for the 100% run.

There has also been a trick discovered that is now only valid for the Vita v1.00 to make this trophy a walk. Simply play the game, then pause on the final boss battle and your “in game counter” will start counting backwards. There have been confirmed reports of minus timings for this trophy. Just take note of how long roughly you have played the game, then pause it for the amount of time you think is required to get under that 30 mins.

Cumulative across all playthroughs and levels; however there is no in game counter. There are numerous coins within each level, with 2 versions offering different amounts. The larger coins will offer 10, with the smaller ones counting as 1. If you do not collect enough coins during your initial playthrough, then simply replay any level until the trophy unlocks mid level.