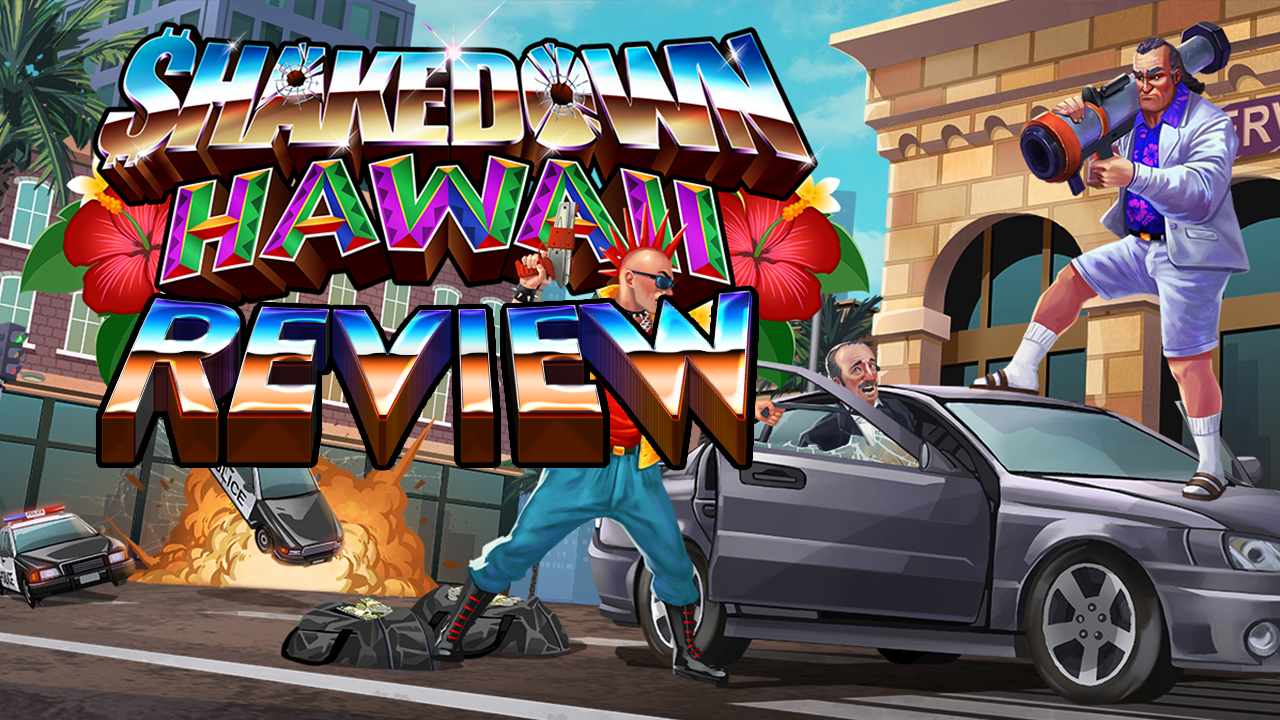 Shakedown Hawaii is an action-adventure game, developed by Canadian dev studio Vblank Entertainment. The game is an homage to Grand Theft Auto, and is a parody on the greed and underhanded tactics of corporate America, all in order to turn profits.

You play as an old crothety man, only know as The CEO. Throughout the game, you play as two other. His son, Scooter, who is an “aspiring” rapper, and Al, a hired gun for….hire. Your company starts bleeding money and is about to go bankrupt, it’s your job to make sure that doesn’t happen! So the CEO decides to leave his house, and take action. His first course of action? To own every business on this Hawaii Island, no matter what it takes, and to make as much money as possible.

The game starts out really good. It makes jokes at the way everything works now a days. You try to run an editing program, and have to “rent” it. You see a videogame conse start up, and you see ads everywhere, and don’t forget, that streaming is just a “fad”. So you see the CEO witness all these shady tactics for profits, and he contains and gets angry, only to employ them himself. Once he gets caught for cutting corners, he tries again another way.

Either way, you play a douchebag, surrounded by douchebags, doing terrible things in order to get ahead. It’s funny at first, I’ll admit. But about half of the way through the “story”, I got bored of the repetitive nature. Do a mission, the CEO sees a business tactic that is underhanded, he gets angry, then does the same thing by employing these tactics himself. Then it gets repeated ad nauseum for the entire story. There’s no character development at all. You don’t turn into Scrooge or The Grinch, where you realize that you should be nice and your heart grows three sizes. There’s also no conclusive ending. The biggest “villain” is a legitimate business man, who doesn’t want you around because you’re shady.

Then the other characters playable characters are basic as well. Scooter just wants to be a famous rapper, and will do anything to get be one. You go out, and try to get “gangsta cred” now and again. It’s kind of funny, yet really cringe. Then when that plan doesn’t work, Scooter finds another way. Then talks to the CEO about going to live with his mom when life gets hard. Like a giant man child. That’s all there is to the character. Then Al is as two dimensional as they come. “Go kill these people, or destroy this building.” Where he always responds “Yes Boss!”. Never questions things, and is always okay with everything he’s told to do.

Luckily the gameplay makes up for the lack of story and character development. The game plays like old school Grand Theft Auto. So it’s a top down view, and it works wonders for the game. You can steal cars, and just drive down sidewalks, or the middle of the streets and plow cars out of the way. Or if you find a Steamroller or Monster Truck, you can destroy everything in your way, to move faster. There’s also the funtime of causing mass mayhem with a variety of weapons! Grab some grenades and blow every car up. Rocket Launcher will also do that and is way more fun. My favourite weapon, was a hair dryer. It shoots a wave a hot-air at people, that miraculously kills them.

But if you’re not careful, the cops will always be after you. Which is fun in its own right, but also, the way the camera works, I was always running into cop cars or cops. What this meant, was that 90% of the time, I was running from cops. Luckily it never lasted long though! I either ran far enough away, or I’d just kill a cop for an instant get away item. My one issue with the cops? They run you down no matter what. If you’re on foot, they HAVE to hit you before they get out of their car. Three cars after you? They all need to run you down. So you get knocked back a ton.

Then there’s the challenges. These were really fun, minus a few crappy one. So there’s 28 challenges in the game. 17 of them are just for one specific weapon, which lets you help learn the weapon. They just require you to kill for points, and they’re quite enjoyable and fun. The other 11 are Arcade Challenges. So kill in a certain way for points. These are where it gets annoying. Either the game wants you to run people over, or knock people into water with a boat, but it becomes RNG based. The game may not spawn enough enemies to get the gold score in the 40 seconds youre given. Or it won’t count a kill that you got for whatever reason. So the Arcade Challenges really annoyed me at some points. Though none were too hard.

Though my favourite gameplay function of the game? The property management. You start out with almost nothing. Start to earn money and you can start buying buildings on the island. Shakedown a store, and convince them to sell. So basically, you end up destroying something, and the people say they’ll sell you their store. So you get even more options for a revenue source! As you progress through the story, you get “Multipliers” for your businesses, that you can put on them. Of course you have to buy them though. But the game gives you a perfect sense of a poor man, not being able to afford things. Until eventually, you are raking in millions of dollars a day and laughing because there’s nothing left to buy!

The game looks exactly how it should with being an homage to old school GTA. The one thing I didn’t like is that every sprite kind of looks similar. You can customize yourself with a haircut and clothes, but you can’t really tell the difference in all honesty. It ended up being a useless mechanic for me that I didn’t waste time with. Also, there’s only a handful of chiptunes throughout the game. There was a car radio though. It’s too bad the “music” from it just sounded like the normal tracks of the game.

This is another spot where the game shines. There’s the story with a ton of missions and things to do. Challenges you can find, and buildings to take and secure. You can try and beat the game in less days each time, while fighting to own the whole island. Then there’s just free roam mode. Just wanna mess around? It’s the perfect thing. No distractions, and just mass carnage if that’s what you want! Wanna see what friend can get more points with chaos? There’s a score attack game mode! So you can sit on a couch and laugh at someone’s fun, then try and beat it yourself when you get the controller back. Just like old times!