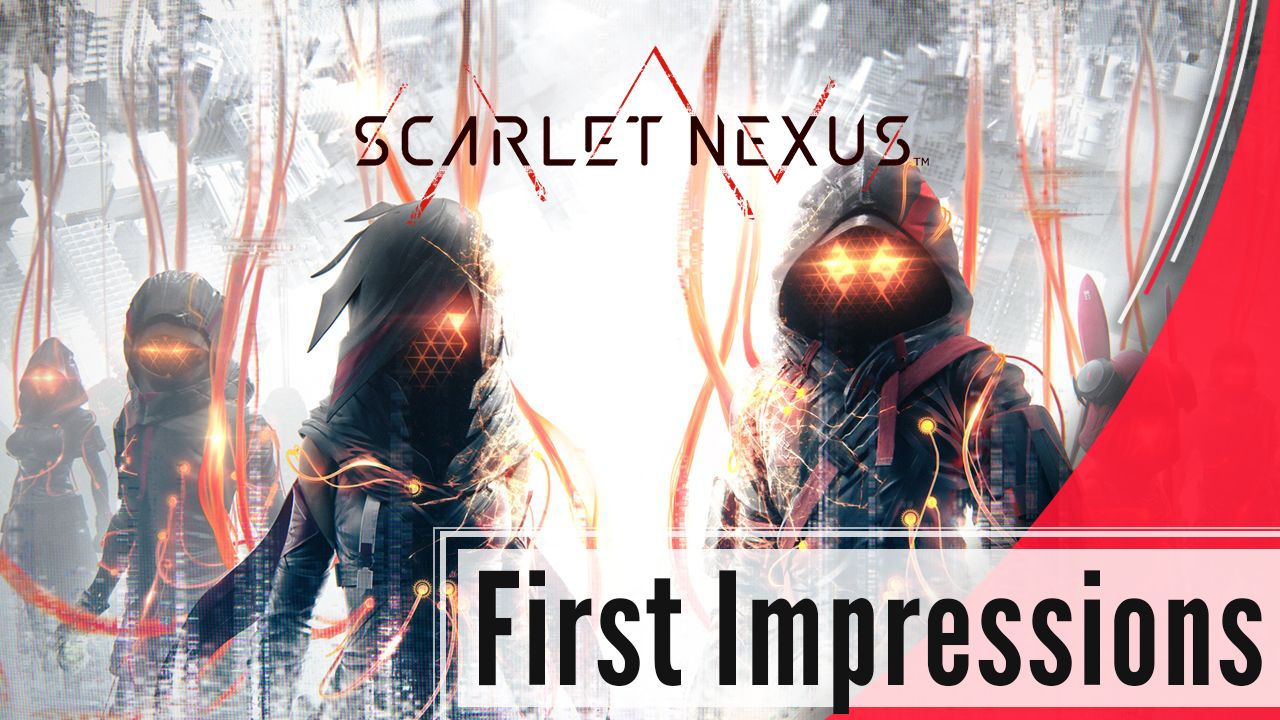 On May 28th 2021, the demo for Bandai Namco Studios’ newest project was dropped. Scarlet Nexus is a new, action RPG, that comes out June 25th 2021, and I played the demo and had a hell of a fun time! So I wanna talk about it. I went in, thinking this was going to be like the studio’s previous project, which was Code Vein. So I was expecting a slower-paced Souls-like game. But instead, I was greeted with an action game that feels kind of similar to Devil May Cry, in terms of how fast the game plays. So you use a combination of melee attacks, and Psychokinesis, kind of like telekinesis, to cut up your enemy, and beat them over the heads with objects in the environment!

Now in the demo, you get to play the tutorial, if you’d like, and then you get to play the first level of each character’s campaign. Now here I was thinking that it would be the same game, just with different avatars. But I was wrong. They each clearly have their own story in the world to play through, though they do have some overlapping dialogue lines. So at first I truly thought nothing would be different. But each character plays differently from the other, and the teammates have vastly different abilities to help you through the game.

The levels in the demo were just linear corridors, with some enemies to beat. So who knows how the game will play out. Whether you just go in a linear progression path, or if you go back to a base after levels, to pick the next one you want to do. But either way, I think I’ll be happy with it. It was fun for a “turn your brain off” sort of game. Even though, it won’t be able to be all the way off, because there will be a story. All I know is that you’re part of the OSF (Others Suppression Force). What are the Others? Monster from another dimension maybe? Or monsters that came to be in the future that this game is set in? Aliens? No idea! But it was fun to kill them!

Kasane Randall is one of the two characters that you can play as in the game. Her build is that she prefers Psychokinesis over melee. So using the items in the environment is crucial to killing the enemies. Then you have her teammates abilities that give your attacks stun effects, let you go invisible to stealth kill enemies that hide in boxes, or slow downtime to catch up to flying monsters, which can somehow break the sound barrier with how fast they move. Okay so maybe that’s not true, but you have to use the skill to kill them.

Then there’s Yuiti Sumeragi. The other side of the story. Unlike Kasane, he prefers melee over Psychokinesis. So his attacks hit harder, obviously, but it’s also crucial to use items in the environment to help kill enemies. His teammates help him by making his attacks have a fire effect, letting him have armor so that he can take on big enemies, and to be able to teleport through walls to reach otherwise inaccessible areas!

No matter whose side you play, you won’t just be mashing the square button until the credits roll. This game gives a good blend on using everything at your disposal. Or so it seems. You also have a “Drive Gauge”, which basically puts you in a berserker mode, as you kill enemies and take damage. Then the game is just like any other RPG. You level up, have a whole skill tree to fill out, and you have to manage not only your own, but your teammates’ equipment. Luckily it’s just weapons, but you’ll always be on the lookout for more powerful gear!

Then for the trophy hunters out there, I can only guess what the trophies will be. Story progression, building up bonds with all your teammates, hitting the level cap, maxing your skill tree, and more than likely, beating it on hard as both characters. Either way, I cannot wait for this game now that I’ve played the demo. Also if you play the demo, you get bonus items in the main game! So what do you think? Are you already excited for the game? Have I piqued your interest? Will you get it from the bargain bin? Let us know in the comments or on our discord!