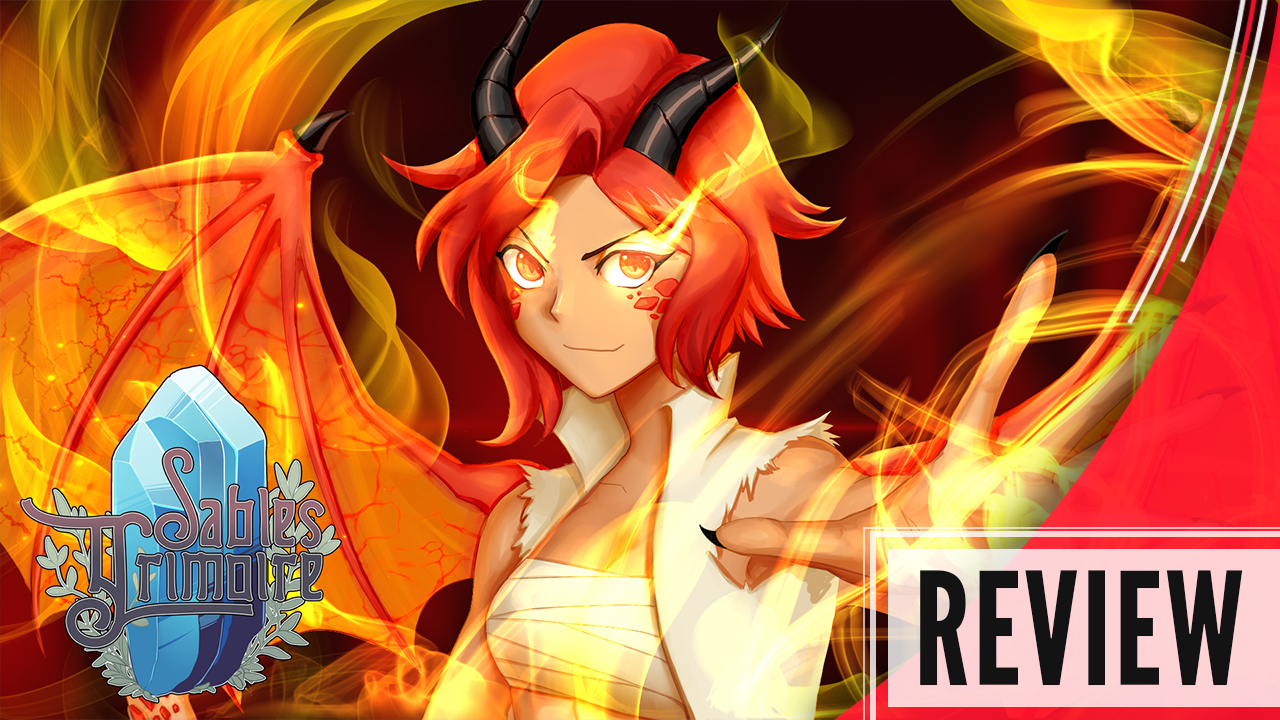 Sables Grimoire is a Visual Novel that is developed by Zetsubou and was released in 2018 on PC. It was then ported to Console by Gamuzumi in 2021!

*Disclaimer: This review contains some minor spoilers. A free code was provided by the publisher for the purpose of this review. In no way does it impact the review. As the thoughts below are mine and mine alone!

Sable is a human boy who is able to use magic. Not uncommon in the world, but also kind of rare. He enrolls himself in Amadronia Academy, to be able to further his studies and research, so that he can be a researcher to be able to help the people of the world! Throughout his time at the academy, he meets a lot of other people, of different races. Elves, Half Dragons, Pixies! These are known as Demi-Humans, and unfortunately they keep to themselves, and out of human society, as most humans hate them. Humans also have a history of destroying the homes of Demi-Humans, and making many more races extinct!

Unfortunately Sable learns much about this fact in his time at the academy. As he’s hated by many people, or they fear him because of his race. Though he catches the eye of many ladies! Typical Visual Novel fashion! Throughout the read, you start to learn a little bit about all of the characters themselves, and end up going through some silly situations, and some terrible, until eventually your choices get you to be on a character specific route! Though this takes a lot more time than I thought it would, and unless you’re on a character specific route, your choices never really matter. You can be nice or mean to everyone, but eventually there’s literally one, usually very obvious, option to choose for the character specific routes.

Though the whole story is about Sable’s six year journey in Amadronia, and his studies, every single story literally takes place within the first few months of his time there. So it all feels a little rushed and silly in the grand scheme of things. Within the first day, you end up almost killing your classmates, and get slapped with a magical item that stops you from casting crazy spells. Then by the third day, you’re in trouble with the principal, and then the character routes start.

Each character route is relatively long to read, and usually has at least one bad ending tied to them. There is an option you can turn on to be able to see if a choice will cause a bad ending though. So that was really nice to see, so that I could save my game, see the bad ending, and then continue on the normal route. Though some of these routes weren’t “bad” per say, there were some that were absolutely awful. Even a few of the actual “good” routes didn’t feel good. As Sable himself doesn’t want to “be in a relationship”, but every route is with a lady, he makes it abundantly clear a billion times how he doesn’t want to be in a relationship. But by the end of a few of them, he finds himself in a relationship. So it all seems redundant.

When it comes to the routes though, some are really awesome. Like Lisha or Drakan. They feel very well written, and you even learn more about the characters themselves, and realize that they aren’t who they seem to be on the surface! Then you have Rei and Eth….who’s routes feel so lackluster in comparison, they kind of felt like a snore to play through. There’s not much excitement, or emotion. It’s the two dolts, being dolts. But then with the other two, emotions are high, there’s insane tension in some situations, that I couldn’t stop reading and was on the edge of my seat!

Though if I have a gripe with a few of the routes, sometimes you spend too much time with a character that doesn’t feel like they belong. So in Rei and Eths route, you end up reading about an hour of an adventure with Drakan in the city. So the whole time that this was going on, I was sitting there going “why is this here? Why am I not reading about the specific characters that this route is about?”. So it ended up just making me bored.

There was a weird glitch too, where if I didn’t quit to the main menu, before I closed the game, none of the things I unlocked stayed unlocked. So the CGs and the route chart got all locked again, even though I knew for a fact that I saw it all. So there were quite a few times where I switched the options to skip all the text possible, and unlocked things again!

During some of the routes, there was even a bit of overlapping text. Luckily I had seen it and had the option to skip it. But I found it a little weird that it was there in the first place. But other than those few times, the dialogue was all fresh and new. Considering how big the game is, I’m honestly surprised there wasn’t a lot more overlap! Though on the topic of “big”. The game felt like it overstayed its welcome after a little while. Just to be able to see all 16 routes, I was reading for about 40 hours. Though to some this may seem fun, it just felt way too long for a VN to me.

I really enjoyed Sables Grimoire. The characters were fun and silly, and a few of the stories were fantastic to read. But with characters so good, and routes so good, other parts are bound to fail. Unfortunately, it also ran a little long for my tastes. But even if it did, I still really recommend this VN to any fans out there! Especially if you like high fantasy sort of! Just remember that Drakan is the best, and you’ll be okay!