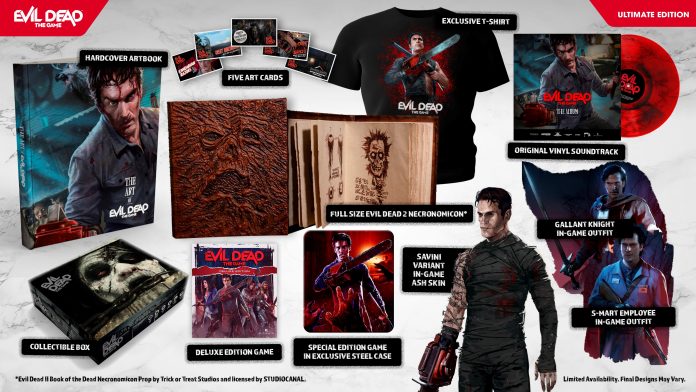 Saber Interactive and Boss Team Games have released a new trailer for Evil Dead: The Game. The groovy and gruesome co-op PvP and PvE multiplayer action game, inspired by the iconic horror, humor, and battles of the “Evil Dead” universe, will release on May 13, 2022, for PlayStation®5, Xbox Series X|S, PlayStation®4, Xbox One, and PC via Epic Games Store.

Pre-orders for Evil Dead: The Game go live today on all platforms alongside a new trailer that pays tribute to the film’s original trailer and aesthetic. Dripping in a vintage, lurid, early-’80s horror movie trailer vibes, the new pre-order trailer shows off some of the classic fan-favorite characters, weapons, and demons that fans can expect to reckon with in the game.

Pre-ordering any version of Evil Dead: The Game grants two bonus Ash outfits: the Ash Williams S-Mart Employee Outfit and the Ash Williams Gallant Knight Outfit. The Standard Edition of Evil Dead: The Game is now available for pre-order for $39.99, while the Deluxe Edition is available for $59.99 and includes Season Pass 1. Season Pass 1 includes four upcoming DLC packs at a discounted rate, with several exciting DLC releases to be announced.

Evil Dead: The Game brings the biggest characters from the franchise together in an over-the-top, gore-filled action experience against the forces of darkness. Work as a team of four survivors, including Ash, Kelly Maxwell, Pablo Simon Bolivar, Scotty, Lord Arthur and more, to kick Deadite butt and banish the vile Kandarian Demon. Or become the mighty Demon yourself, using your powers of possession to stop the good guys dead and swallow their souls! Discover fan-favorite sights from the franchise, battle with more than 25 hard-hitting weapons in multiplayer and the game’s bonus single-player missions, and level up a variety of skill trees to survive the night.

Evil Dead: The Game will release on May 13, 2022, for PC via Epic Games Store, PlayStation®5, Xbox Series X|S, PlayStation®4, and Xbox One. It is scheduled for release on Nintendo Switch in the future.