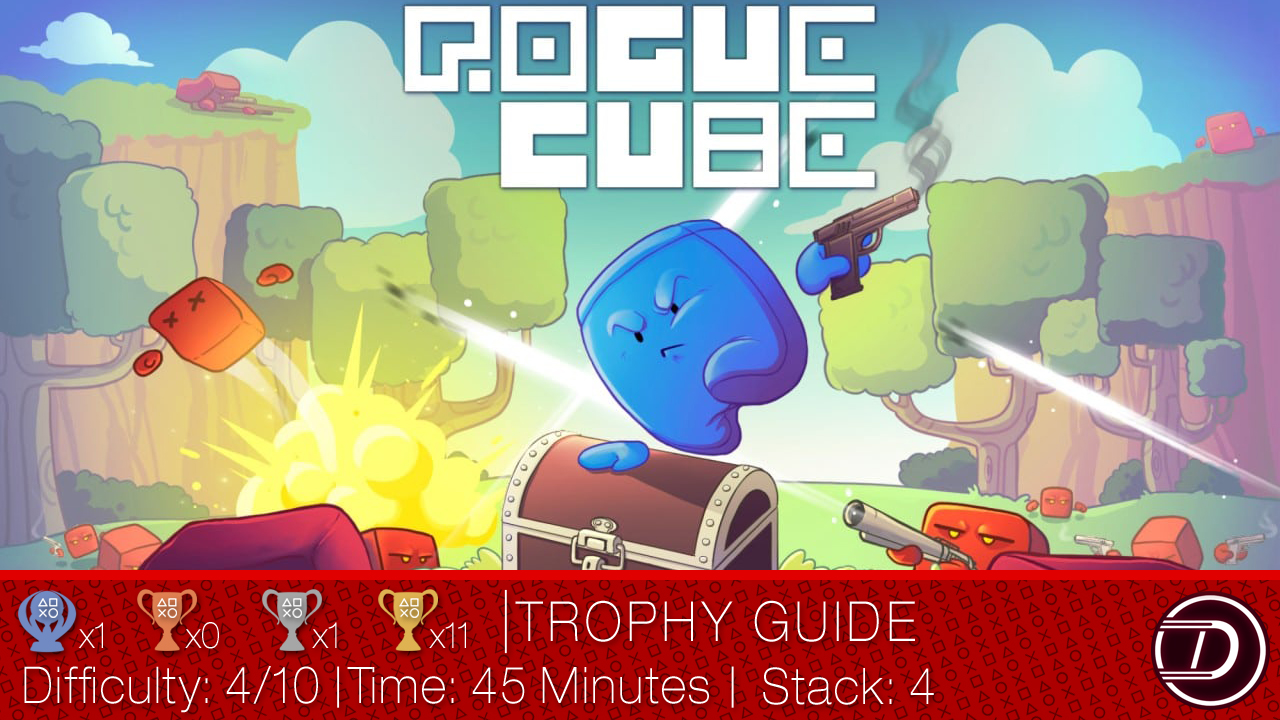 Welcome to the RogueCube Trophy Guide!
A challenging twin-stick shooter developed by Bipolar Dawn and published by Ratalaika Games!

Step 1: Tutorial and Daily Mode
From the main menu after doing the tutorial, select the Daily Mode and try to get confidence with the game. Your main focus during this step should be:
– Kill your first bunch of enemies and don’t collect any chests during your first level;
– Before taking the gate to the next area, make sure to run out of ammo to unlock Sam Character;
– Die and restart 10 times to unlock the Ninja Character;
– If you manage to find a melee weapon in a chest while dying and restarting 10 times, pick it up, and defect a bullet.

I Don’t Need Them

Step 2: Campaign Mode
This step can heavily change the completion time of the platinum as you need to reach Level 6-1 without dying once in the Campaign Mode. In fact, if you die, you will need to restart the whole game from scratch. Take it easy, don’t rush the levels and don’t get frustrated as well.
Each zone, except for the boss fight ones, is composed of 3 areas.
Check the Tips and Strategies section for useful info on how to tackle this step in the easiest way possible.

As the guide mentions, the Campaign Mode can be a “wall” to the platinum trophy as if you are not good with the twin-stick shooters, this game can give you a good challenge. Like all rogue type games, you only have one single life and you need to make your way through 14 levels without dying to be able to get the platinum. Also, remember that all the levels are randomized.
However, there are some useful tips you can use to change the sorts of the game:

Sam is unlocked after running out of ammo your first time. Start a level and keep shooting until you don’t have any bullets left.

Beack is unlocked after reaching level 4-2. The trophy will unlock after beating level 4-1.

The Ninja is unlocked after dying and restarting the game 10 times.

To get this trophy, simply kill your first enemy to make it pop. You can get it in Daily and Campaign Modes.

This trophy is unlocked after deflecting an enemy bullet with a melee weapon.
You can find melee weapons such as the Frying Pan, the Katana, the Broom, and the Fantasy Sword inside the chests that are scattered around the various levels.
When you find one, pick it up and use your fire button to deflect an enemy bullet.

NOTE: If you play the game with the Ninja Character, he will have a Katana from the beginning.

To get this trophy, start a Daily Mode game and you will get it upon death.

To get this trophy, simply complete a level without opening any chest of the game. Watch out to not shoot and to not get close to them as well as these 2 actions will avoid you the trophy.

This trophy is obtained after spawning thorough a gate 10 times in total.

This trophy is obtained after spawning through a gate 20 times in total.
The counter takes note of every re-spawn you do, so each time you start a level even upon death, it will count toward the progression of this trophy.

The first boss is Rufus and it’s located in level 3-1 after beating level 2-3.

He can easily be killed with a Crossbow if you have one but every weapon does the work. Keep looking at him as if he makes an angry face, he’s going to charge towards you.
Also, watch your steps as the area sides are scattered with spike traps that trigger as you step on them.
Sometimes mummies with pikes spawn as well: kill them rapidly as they deal huge damage.

When you kill him, collect his drop to open the gate to the next area and you will unlock the trophy.

The second boss is The Plant and it has a lot of health but it’s easier.

Make sure to bring a lot of ammunition and to only shoot to the plant itself (the middle part) as it’s the only part that can be damaged. Sometimes there are some flowers on the three spinning branches and if you shoot at them you will receive a random drop between health or ammo.
Watch out to the seeds it throws as well because they explode and contain poison that causes ranged damage.

After killing him, pick up his drop to open the gate to the next area and you will unlock the trophy.