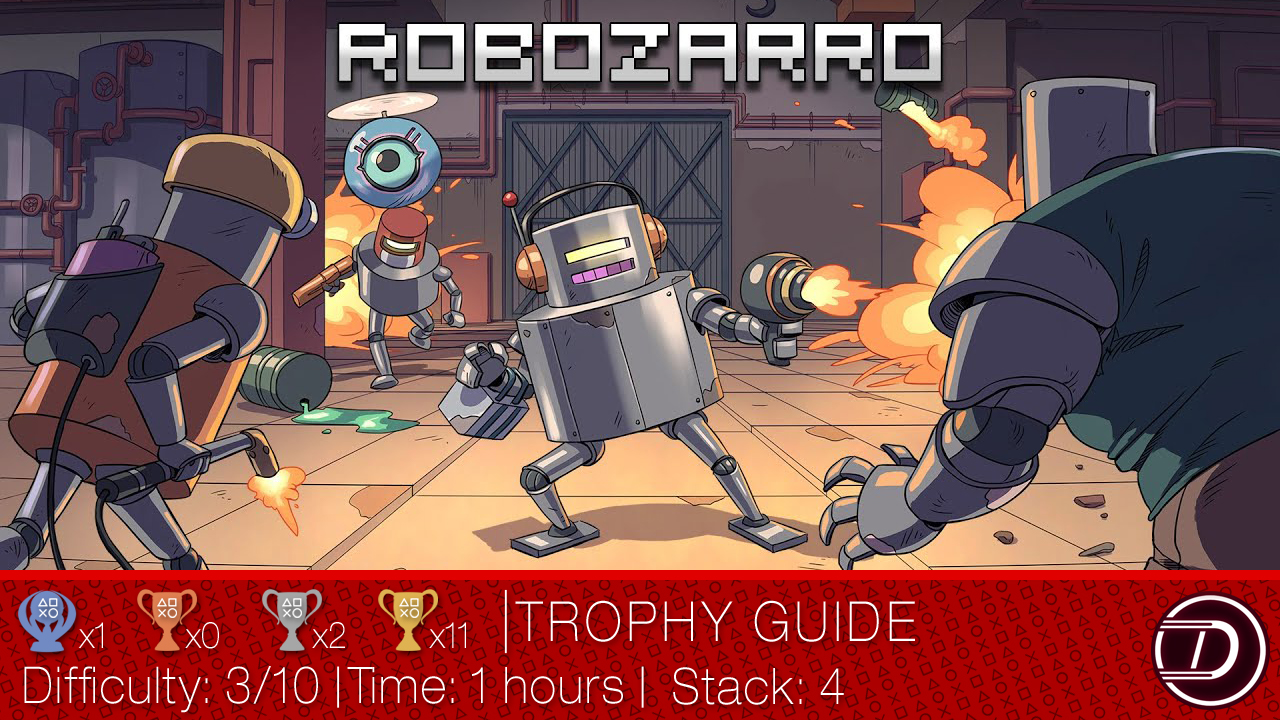 Welcome to the Robozarro Trophy Guide!
A fun little platforming puzzler, with a quick and fun platinum trophy! Come kill robots and sewers monsters on your way!

Step 1: Play the game
There is no real strategy to get these trophies. They will all basically unlock by the time you reach the second area of the game. So just keep playing until Ro-Tek and then you’ll be done!

You’ll be earning these trophies:
All

If you want a video guide to memorizing the levels you need to face up while going for the platinum trophy, follow the video down below (Credits to Dino_Roar Gaming):

For this, you just have to open 1 trash can. Trash cans are scattered around the world, and when they light up, you have to hit triangle to open them! Then this trophy is yours!

In the first area of the game, you end up having to go to a shop called “Fix & Chips”. Fix is on the right side under the “Pick Up” sign. Talk to him for this trophy.

Getting this trophy, requires you to buy something from a vending machine. Once you get into the sewers, there will be a Vending Machine to your right. Interact with it and buy some Health for 5 screws. This trophy will then unlock.

For this, you have to simply throw a grenade. You can either buy these, or find them. But you’ll find them before you can ever but them. Once you do, all you have to do is press

, and the trophy unlocks!

In order to get this trophy, you have to destroy 5 Sewer Turrets. Unless you magically run past every enemy, this will come naturally, as you progress through the sewers. They are enemies that sit on a pillar and shoot at you. After you kill 5, this trophy is yours.

To get this trophy, you need to collect 30 pieces of junk. Junk is only counted as the screws that you can pick up. This is cumulative, so once you pick up your 30th, overall screw, this trophy unlocks.

Getting this trophy requires you to find the Robo-Claw. This is found in the sewers and will come naturally as you progress along! Once you get it, the trophy unlocks.

To get this trophy, you have to break 4 Yellow Barriers in the Sewers. They are broken by shooting the blaster at them. You will come across at least 4 as you naturally progress through the sewers. After you break the 4th barrier, this trophy is yours!

In order to get this trophy, you have to kill the boss at the end of the sewers. This boss is actually quite easy. All you have to do is use the Grab N’ Blast, and shoot it at the water. You’ll then have a lump of it, to shoot at the boss. Do that and he takes damage. Repeat this until the boss dies and you get the trophy!

For this trophy, you need to kill 10 Robo Spiders. While in the sewers, you’ll open a door, and fall down a hole. You’ll then see an enemy that’s spawning little robots! Keep shooting them and killing them until this trophy pops!

This trophy requires you to kill 10 Mini Bots. They don’t appear until the Ro-Tek area of the game, which is right after the sewers. They become the common enemy here, so after you kill 10, this trophy pops.