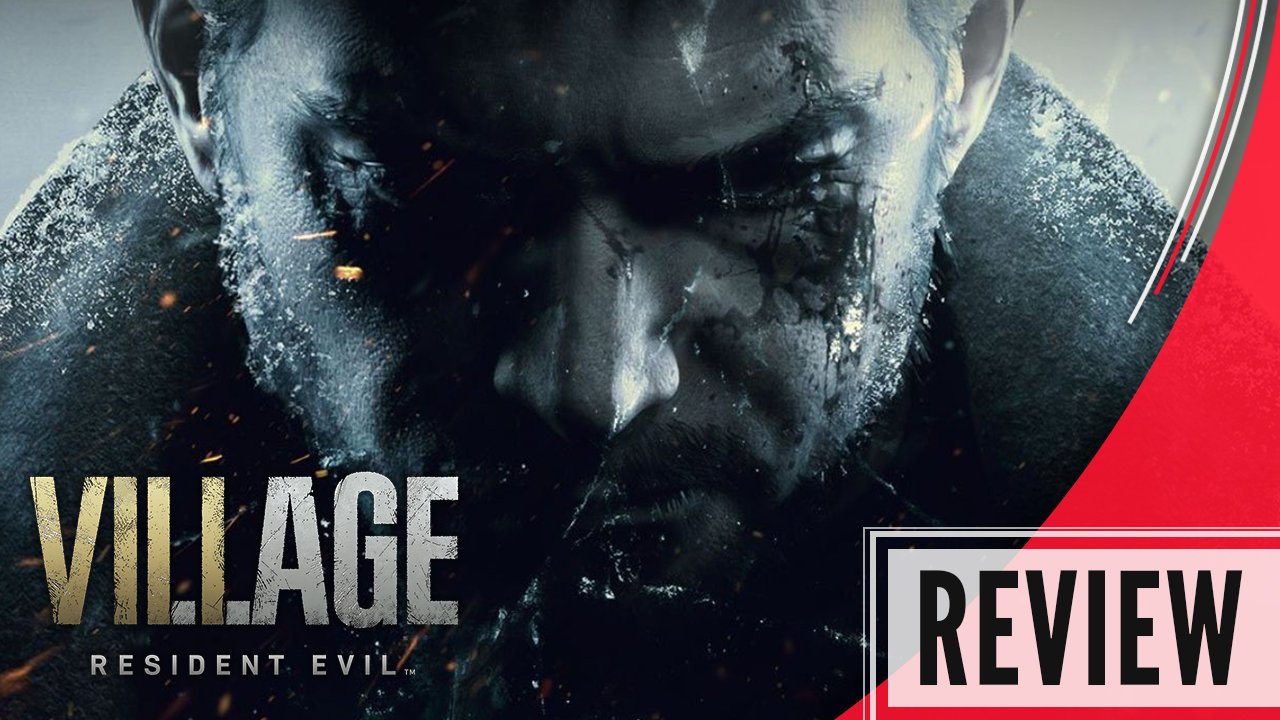 Resident Evil Village was developed and produced by Capcom in their RE Engine and was released on May 7, 2021, for Xbox One/Series X, Ps4/5, and PC! It is the 8th mainline installment in the popular franchise!

Warning! The review contains a few minor spoilers to locations and characters! You’ve been warned!

Step back into the role of Ethan Winters. A man who survived a terrible nightmare in Dulvey, Louisiana in 2017. Fast forward 3 years later, and Ethan’s life is in a kind of state of normalcy. Until his house gets attacked, his wife gets shot, and he and his child, Rose, get taken from their house, only for him to wake up in the mountains. He ends up finding his way into the titular village, where nothing is what it seems. There is a large castle in the distance. That’s where Rose has to be. So it’s off on your adventure to find your daughter, and return to your life, and exact revenge on the people who put you in this position again!

Now compared to traditional Resident Evil titles, this one is superbly written, and I thought the pacing was absolutely perfect with the tone the game wanted to set. Again though, with a lot of lore being in documents, you HAVE to read them. As I’ve said time and time again in Resident Evil reviews. But there’s so much that’s uncovered throughout them! There’s a bunch of ties to the events in Resident Evil 7, and some ties to the very beginning of the lore itself. I loved every second, and the added lore to it. This universe lives and breathes and thrives from it. I honestly don’t think it could’ve been done any better. Especially compared to previous entries. There’s a whole cast of characters to meet, most of them being the villains, and the ever so talked about Lady Dimitrescu! The internet’s favorite 9-foot vampire! Who lives in a big-ass creepy castle! Now the story is split up between a lot of areas, all given to each of the bosses of the village. So the village itself is more of a hub area. So each character has its own story, and all of them play out fantastically. Except for Moreau. Who’s just a giant Fishman. He was the only exception to the absolutely brilliant game. If he was left out, it might’ve been for the better. I wish I could go into more details about it all, but at the same time, I don’t want to enter too much spoiler territory.

Then there’s a fantastic plot twist, that instantly made me go “hwhhhhaaaaaaattttt?”, even though it was one of those things you always questioned. It was one of the greatest twists in the series, and it made me somehow care so much more for the end results of the story. The game made me feel things during the ending cutscene, that no Resident Evil has ever made me feel! Pain! I was genuinely sad. That’s how well written they’ve made this game!

Now compared to Resident Evil 7, this one is a bit more on the more action-oriented side. I played on Normal and there was so much ammo to be given to me as I played through the game. But I still played conservatively, so no matter the situation, I knew I’d be prepared. But if you played the previous entry, the gameplay is still basically the same. It’s first-person, with an emphasis on exploration. Though I would say it’s not very puzzle-heavy like 7 was. I feel like I always knew what to do, and where I should be going. What was really awesome this time though, was that in the map screen, a room showed blue if you ended up gathering everything from it. So this was fun, except when it wasn’t. Some rooms had itty bitty treasures to obtain, and they would give off the faintest sparkle. Then you had to shoot them down to gather them. So constantly checking every corner, and every tile of the ceiling, was sometimes really annoying. But that doesn’t mean I didn’t have fun with it. It gave me a lot of RE4 vibes. Especially with the inventory system. You get to expand how big it is, and you get to play Tetris with all of your equipment and ammo, to make sure it all fits, because there is no item box in this one! So if you don’t have room, you have to make room! There was also, what felt like another Resi 4 homage, with Moreau’s area, as you’re in a flooded village, and there’s a big killer fish trying to eat you. As I said, he was the weakest part of the game, but his set-piece was also amazing.

Then there’s the heavily advertised Castle, with big old Lady D! I absolutely loved the Castle. It was fun, it was exhilarating, you got to see a big portion of it, but at the same time, it felt small and didn’t last as long as I hoped it would. But maybe that was because I overhyped myself with the area, without thinking about the rest of the game. Then there’s a big giant factory that makes robots. This area was easily one of the best parts of the game with the Castle. These areas made the gameplay feel tight, and claustrophobic in some areas, with pitch-black areas, where you can’t see very far in front of you, so you have no idea what’s coming out. It doesn’t help that Ethan can’t seem to hold a flashlight right. It always seemed way too off-center, when it was actually on. There were some points of the game where I’m going “I can’t see anything! Why isn’t the flashlight on!?”. But even in the scariest of time, I had a whole arsenal of ammo to fall back on. Along with my whole arsenal, I always had a litany of guns to choose from to kill things. The best part was, that you also get to upgrade your guns. So I was always left with the choice of “well what gun should I upgrade? Do I want more damage for this? Or this? Maybe faster-firing rate? Oh I do need to reload faster though.”, so I was always having to answer that hard, fun question, and I loved it.

Now just because you have a whole arsenal of ammo to fall back on, doesn’t mean the game isn’t scary. There is a whole area that is absolutely horrific. I won’t say why, but it involves running. A lot of running. But also, this has one of the coolest bosses of the entire series in my opinion. Where you aren’t forced to pick the biggest, heaviest hitting gun from your inventory, but you have to play hide and seek. I’m serious. It was such a different take, that I instantly fell in love. Now the bosses themselves are absolutely big and fantastic and bullet sponges. But when you’re actually damaging them, they scream and yell, and actually come to terms that they’re about to face their own deaths. So they try to fight harder and fiercer, as opposed to the two or three same dialogue lines you see too often.

This game looks fantastic on a base PS4. Over the 3 years that they’ve been refining the RE Engine, the game looks even more beautiful than last year’s Resident Evil 3 in the same engine. The guns, the gore, the destruction all looks amazing. The transformation of the bosses looks fantastic too. The only time I ever saw muddied textures, was when I was loading my save data for the very first time, and even then, it was just for a brief moment. Then the sound is where it lies. You hear Ethan’s footsteps, the growling and moaning of enemies all around you. The one specific scene of the game that everyone is horrified by sounds amazing. The squishing and the noises that happen during it, are so guttural and horrifying, that I felt it for hours. I was surprised too, because I played the Whistleblower DLC for Outlast, and I didn’t think that was horrifying at all! But this scene actually got to me, and I have a new fear…it’s great…

Now, where would Resident Evil be without replayability! There’s a lot here to do! There are speedruns, there are added difficulties, there’s a trophy challenge to do a playthrough with NOTHING BUT A KNIFE! Then there’s Mercenaries mode. Now I can tell you this, this mode is not for me, and has never been for me. So I didn’t enjoy any of the time that I tried. But I know some people really enjoy it. So much so that there’s a whole game, just of mercenaries! Then there’s a challenge list of things you can do in the game, that give you bonus points, which can be used in the bonus shop, that gives you things like infinite ammo, or super guns! So you can always be working towards something during every playthrough.

I can’t recommend this game enough. It hit every note that I wanted it to, and then some. Sure I would’ve loved some parts to last longer, and others to not be included at all, but I can overlook those things! Because the entire package itself stands out as a fantastic game, that brings awesome added lore to the series, and actually gives you more emotions than just fear! I can’t recommend this game enough, and it may just overtake Resi 3 as my all-time favorite title in the series! We’ll have to wait and see on that one though.