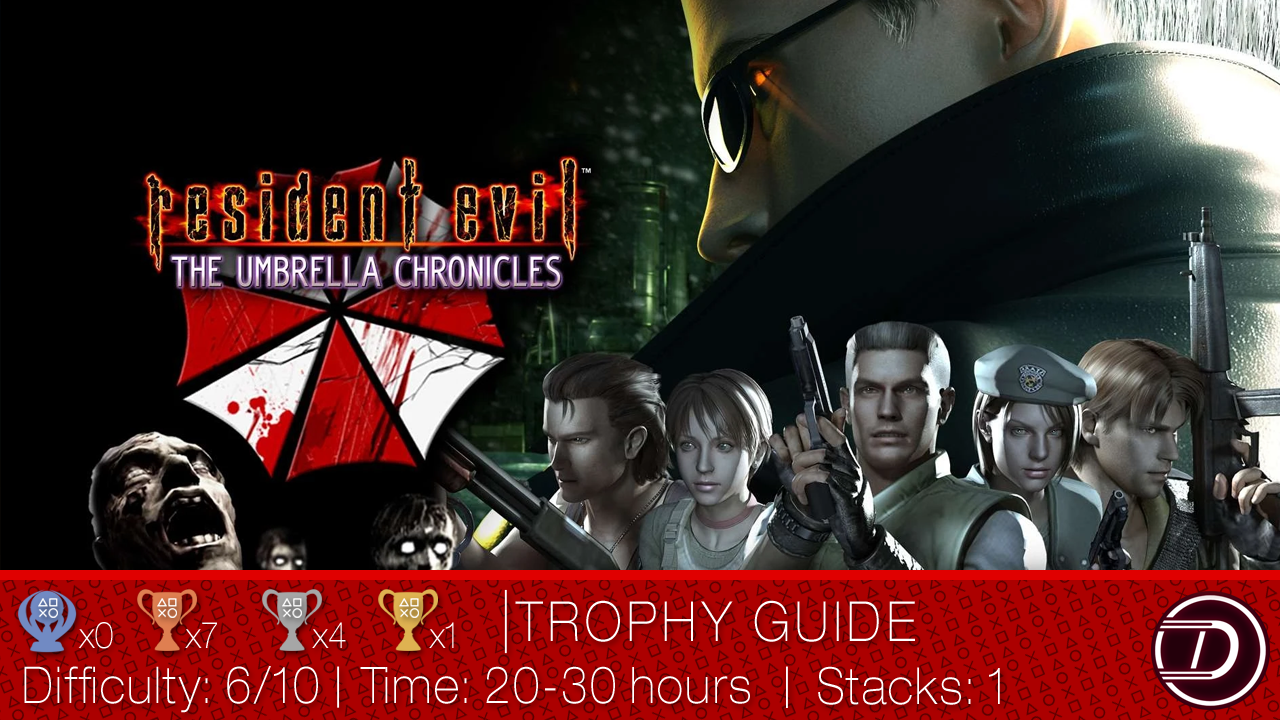 Welcome to the Resident Evil: The Umbrella Chronicles Trophy Guide!
In Umbrella Corps, you go through abridged versions of the stories of Resident Evil 0, 1, and 3. All in Rail Shooting Arcadey “fun”!

Step 1: Enjoy The Story
During this step, just play the game. The game is broken down into 4 scenarios. Resident Evil 0, 1, 3, and a new story in the Resident Evil Universe. You do have to play through them in order. You also unlock little side stories within each scenario as well! So you have about 5 levels per scenario. You’ll also get Star after every level to upgrade your guns. If you feel unprepared for any level, you can replay an old one, and get more stars for upgrades! In my experience, I wasn’t good enough to unlock the very last level in the “Umbrellas End” scenario during my initial run. Unfortunately, some levels need to be A ranked at the minimum, to unlock others. So I basically skipped to step 2 when I couldn’t get the last level to beat the game! But, at the end of this step, you’ll have at least 50% of the list done.

Farewell To A Friend

The Fruits Of Ambition

Taking One For The Team

Step 2: Collectibles + Hard S Rank
At this point, you’ll be doing a few things at once. Getting all the collectibles in a level, then switching it to Hard mode to get your S rank, and being able to upgrade all your weapons! There are many fantastic guides out there for Collectibles, and I will link one in

Archive Collector.
Now play on Easy to get all the collectibles in a level. When you have them all, you can then go to the options menu, and switch the game to Hard. Now replay the level you just did, so you have the layout and enemy placement fresh in your mind. You then have to S rank them. The process of S ranking will be laid out in the

Master Of Destruction trophy below!

Now repeat the process for all 22 levels, and you’ll have a few more trophies done, and just need the minigame!

Step 3: Minigame!
Now is the time to clear up the final trophy, which is the minigame! Zombie whack-a-mole! After this stage, you’ll finally have your 100% done!

This trophy unlocks after the opening cutscene in “Train Derailment 1”, in the Resident Evil Zero campaign.

This trophy unlocks at the end of the Resident Evil Zero campaign, which is “Train Derailment 3”. This level has three boss fights in it technically. The first boss is against the Leech Queen, where you just keep firing at it, and it will eventually die. Afterwards, you’ll be on an elevator. The Queen will be trailing behind you, stomping up the shaft. Use your pistol to try and get some headshots in, but as it gets really close, switch to the grenade launcher and hit it with it to knock it back. After this step, you’ll be on the final phase.

For this fight, you have to be attacking it, while it’s in the sunlight. It doesn’t take damage if it’s not. So use your pistol and shoot it in the mouth, until it moves into the sunlight. When it does, switch to literally anything else and pump it full of lead. When it moves out, use your pistol again, and just repeat the process until it’s fully dead!

During the first level of the Resident Evil 1 campaign, called “Mansion Incident 1”, you’ll be on a terrace fighting birds and dogs, and a zombie will eventually enter the screen. Jill will say something about Forrest, and once you kill this zombie, this trophy unlocks!

I recommend sticking with the SMG at all times. When he grabs you, switch to the shotgun, and shoot his heart. You also have to be aware of QTE dodge events, or you’ll take a lot of damage. When Brad drops you the RPG, grab it, and go to town with the 4 shots it has, to finish the boss off quick!

You’ll get this trophy after you finish the Resident Evil 3 story, which is the “Raccoon’s Destruction” storyline. At the end, you have to fight Nemesis on the police roof. He’s not that hard, but he’s not easy either. When he’s standing in front of you, he will charge up an attack. If you don’t damage him enough to stun him, you’ll take damage. When he jumps on the ledge above you, he uses his tentacles to attack you.

and moving the Left Stick. Afterwards, he’ll jump in the air, and a QTE will happen to dodge him. Then the routine starts over. His weak point is obviously in his stupid dumb face. So just hit him there as much as you can, until he finally dies!

This trophy is for beating Sergei in Wesker’s chapter “Dark Legacy 2” which is found in the “Umbrellas End” campaign. This boss is actually relatively easy. Anytime he’s moving, try to shoot the red ball on his face. At a few points he’ll shoot a ball in the air, which rains bugs down on you. Try to defeat as many bugs as you can before they land. At some point, he will grab you and you’ll get a QTE to “jump”. When you do, you’ll end up behind him, and see his big red weak point. So just take the chance to lay into it and he will fall by the second time you see it, depending on your weapon level and aim.

In the Resident Evil 1 campaign, which is “Mansion Incident”, Rebecca has a side story of her own. Once you finish both levels of her “Nightmare” storyline, you get this trophy. At the end of “Nightmare 2”, you have to fight Yawn again. This fight is done the exact same way as it was done in the normal campaign. So just shoot him in the mouth when he opens it, and don’t waste ammo when he’s moving around!

This is acquired at the end of the “Umbrella End” campaign. Now the boss at the end of level 3 is awful. At first he runs around with a rocket launcher, and his weakness seems to be his chest. So you have to get what little chances you have to hit his chest, then after his health bar is gone, you have to defeat his final form. This is where it gets awful. You have to shoot a small spot on each arm and his chest. While you do this, he attacks you by either throwing rocks and tentacles at you from the ceiling, or makes you do QTEs to dodge lasers.

If you get attacked by lasers, you may have to defeat more tentacles, or do one more dodge. After he’s down, shoot the giant glowing red spot. Then he’ll attack you and you need to do 2 dodge QTEs. Then you have to shoot him in the mouth, before you get a chance to hurt him again. Then the fight starts all over. After you beat him, the level is finally done.

This is unlocked after you beat Hunks level! Now as per usual, this minigame is absolutely dumb, just like every other Resident Evil minigame. Basically you’re gonna be playing whack-a-mole with Zombies. You’ll see a wall in front of you, with a hole in it. You have to shoot zombies that appear in the hole. Later, zombies also appear elsewhere. If you miss a zombie, they will come through a door at the end of the wave, and you have to kill them before they touch you. As one hit, and you die.

Now you have to get through 9 waves of this. If you watch the bottom of the wall carefully, you’ll be able to see slight movements now and again to see where zombies are about to pop up. But for the most part, you just need to be quick on the trigger. On the 10th wave, there will be a singular zombie. You HAVE to kill this zombie with a headshot. Nothing more, nothing less. Is it nerve wrenching? Yes. Will you hate yourself if you fail? Yes. Will you get anything other than this trophy? No. Once it’s dead though, you win!

During the levels “Umbrella’s End 3” and “Dark Legacy”, you’ll be in a maze of rooms. You’ll need to find the room  that has a stash of weapons. This will come naturally as you go for the Collectibles in each chapter, as a collectible is in that room on each one. But the combinations are down below for each one! Remember, when you shoot a door, you still have to press X to move through it.

For this trophy, you have to get S rank on Hard on all 22 levels of the game. You then unlock unlimited ammo, and have to buy the unlimited ammo for the Anti-Tank Gun, which takes 11 stars to get from level 4 to 5. There are 5 categories that you get graded on, and they are “Time, Kills, Headshots, Objects Destroyed, and Collectibles.” Below is a breakdown of the categories.

To be able to get an S rank on a level, you need a minimum of 3 S ranks, and 2 A ranks in all your categories to get an overall S. If you have anything less, you miss your chance and have to replay the level.