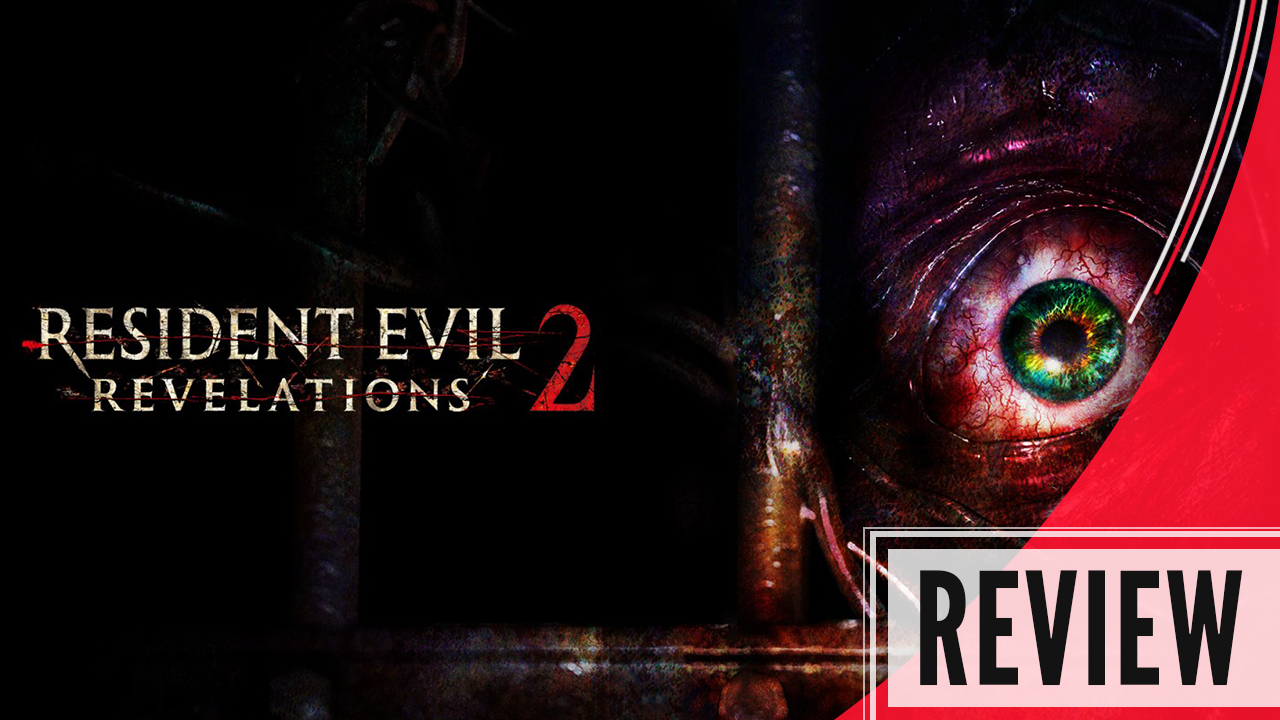 Revelations 2 was created by Capcom and was originally released in 2015 as an episodic adventure. It came out on all platforms at the time which were PS3/4, Xbox 360/One, and PC!

This game picks up several years after the events of Resident Evil 5, and this time it sees Claire and Barry as the main characters in the story. Claire is working for a company called TerraSave, which prides itself on cleaning up BOW (Bio-Organic Weapon) areas and helping all the victims of them. As an expert on BOWs, Claire is perfect for the role. She’s also accompanied by Barry Burton’s daughter in this company! It’s Moira’s first day. She walks in all happy, sees Claire, they talk, and then disaster strikes! They’re captured and wake up in cells in a mysterious prison, that just so happens to be on an island! Deja vu? Claire sure loves being seen on prison islands. How did they get there? Why are they there? Who is this “Overseer” that talks to them through these crazy bracelets on their arms! All will be revealed in due time! Their first problem is figuring out how to get home!

Then there’s Barry. Cool, collected, veteran Barry. His mission in all of this is to find his daughter Moira. Although he stumbles upon Natalia, a little girl who’s been living on the island. He then goes through the journey trying to be a good protector, and realizes he’s been a really shitty father. You also learn more about the after effects that people have dealt with since the fall of Terragrigia, which happened in Revelations 1! Although his journey for the first half of his side of the story is retracing the steps of Claire. So you don’t really see any new locations. It’s not until halfway through that he starts getting new areas of his own, that are generally creepy in their own right!

Unfortunately with how short the story truly is, and it being split between Claire and Barry, there’s not much here. Compiled together it’s great, but taken as their own separate story, there’s just nothing there, as much sense as that doesn’t make. So as Claire it would just be “where are we? Oh here we are. Oh let’s go to that tower cuz the big bad person is there! And I left.” So that’s how each story as their own is just very shallow. But together, they make up for it.

Now this is where the game shines. It has atmosphere and intrigue and spooks coming out the butt! Playing on the Ps4, it also plays at a nice silky smooth frame rate that feels amazing! The game controls as any 3rd person shooter though. Although this is a survival horror game, so you have to use your ammo and healing items wisely! Don’t think you’ll have ammo for all those enemies? Run and dodge through them! Big boss in front of you? I hope you saved your big ammo for him, and didn’t get hit too much so you can heal! On lower difficulties though, the one thing it suffers from is too many items. So I was never worried about my ammo supply. Big hoard of enemies? I have the ammo for that! Got hit too many times? Good thing I have an ample amount of healing items! The environments are also stocked with items to find as the alternative characters. So Moira shines a flashlight on sparkling items, and Natalia points at them. Most of the time, they’re more ammo! Sometimes I was even throwing ammo away to make room for other things!

Then the gun customization from Revelations 1 is back in this. Though it somehow doesn’t feel as deep, mostly because you just don’t seem to get as many mods for your guns in the story. In Revelations 1 I was constantly trying to figure out the best way to mod out my guns. In this it’s just “oh god another damage mod. Guess it can go on my sniper.” The worst part about it too, is that Claire and Barry share the mods! So if Claire uses that Damage 4 mod you found? Barry can’t use it on his weapon. Sorry!

I know I’m being hard on these few aspects. But then there’s the rest of the game that feels great! One of the best things is with the side weapon creation. I was always thinking about what could be the best weapon for my upcoming situations. Do I make some explosive bottles that can clear out a big crew of basic enemies? But what if they’re the more complex Revenants, and they don’t die to explosives? Do I make fire? Or I can make smoke bombs so I can stealth kill enemies while in the smoke! These were all possibilities sometimes and it was great! Now as for the Revenant enemies I just mentioned, they’re the main enemies in Barry’s campaign. They’re weird creatures, that can only be killed by shooting their weak spots, and they’re fast! So it was intense switching to Natalia to see their weak points, then switching to Barry and getting the shots in to kill them, without wasting too much ammo! At the end of the day, this is all made even better with a skill tree that you can work your way through. Yes at some point you’ll have every skill, but working through the game, it’s a great process of picking and choosing right. Do you take the extra melee damage, or do you take the ability to do more weapon damage when you’re crouched? What about dodging? Do you make it so dodges make you go further, or do you give yourself temporary invincibility when you dodge. It’s a great thinking game as you play and reach the end of every level to pick!

Now the game is a little old, but for a product of its time, it looks fantastic and sounds great! There’s no background music here. Just groans of enemies and the clacking of your feet through the caves and hallways of the levels. Unfortunately there are a few things that look a little rough if you really look at them, but for the most part, you shouldn’t notice. Even the enemies are nicely designed….even if there are only 3 different variants. But then there’s the cutscenes. The big fancy ones, and they look fantastic! They look like they could be in a movie of their own!

This game has a lot going for it. Especially in the replayability factor. After the main game itself, you have level challenges for each character, you have the different modes to play to see if you can beat them, you have a WHOLE PAGE of challenges and unlockables to get if you feel so inclined. Then there’s Raid Mode, which has a whole other challenge page in itself! Although if you played Revelations 1, you know exactly what this mode is. So bring a friend, hunker down, blow through the levels and get better! There’s so much to see and do in this mode that you’ll be busy for so long! The gun customization is also so much better here, than it is in the main game. Then each character has their own skills they can unlock, and there’s a ton of characters. So dig in, and have fun!

Revelations 2 has a lot going for it. Especially in terms of content. The story is a bit bare bones if broken down by character, but together it’s a wonderful story that really adds more depth to the universe. Plus you get to know Barry more, so that’s a plus. Then there’s Raid Mode, with all of its content that can keep you happy with a friend for hours on end! I can’t recommend this more than enough!