A rainy game that shines its sun more then expected 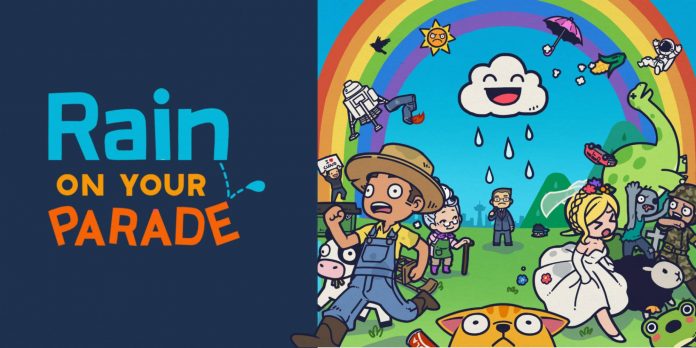 While the Rain On Your parade brings you… well… rain? it doesn’t make you feel like it’s a rainy day. The game makes a perfect balance between the gameplay and introduces new features and even parody levels to keep it light and more fun than expected. Here is our Rain On Your Parade Review!

Rain On Your Parade is developed by Unbound Creations and released on April 15 2021 for Xbox One, PC, and the Nintendo Switch. In Rain On Your Parade, you will control a little rain cloud and bring unexpected doom onto the population.

The game is pretty simple, complete some tasks to complete the level. That’s it, it’s super easy but some levels do take some thinking and a handful of retries to complete, especially if you want all the stars to get all the skins for your cloud. There are also some side-levels, most of them are parodies of other games, one of them being Metal Gear Solid and another one Counter-Strike Global Offensive.

The story is kinda boring and forgettable, I personally played and completed the game a day before writing this piece and was able to remember exactly 1% of it, the only thing I remember was a kid talking about the story. The way it was presented just made it so boring and it didn’t feel engaging at all. I personally would have liked some type of line to follow to give more of a reason to why the cloud does some of the things it does, but it’s not really important in these types of “timewaster” games where you just play it for a few hours and that’s it.

Visually the game is really nice, it has a perfect color pallet, and it’s not extremely good, but it has its own charm to it. During your playthrough, you will unlock a new visual for your cloud like a hat that you can wear if you get all the objectives in a level. This gives the gameplay an extra edge and kinda makes you want to try to play more to unlock them all, especially because of how cute they are. There is like a frog hat, a cat hat, and more, it’s just super cute.

Offline
While its gameplay is amazing and just a ton of fun to play, the story is forgettable and boring. The gameplay loop is kinda the same for every level but the game is just short enough to not make it extremely boring until after you finish the game by introducing new gameplay elements at the right time.Rain On Your Parade Review (Xbox One)