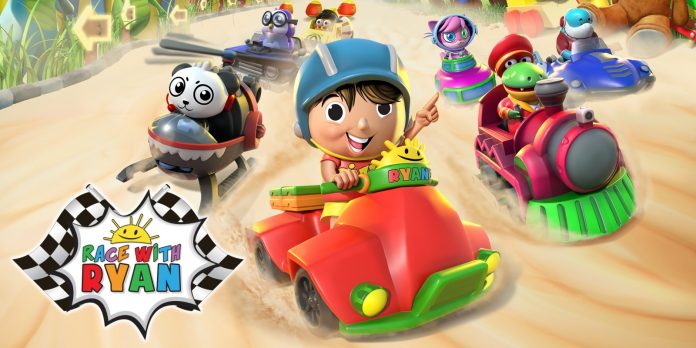 Race With Ryan is a racing game for kids that plays a lot like a dimmed-down version of Mario Kart 8. Developed by 3DClouds and published by Outright Games and is available on the Nintendo Switch, PlayStation 4, PC, and Xbox One. Read more in our Race With Ryan Review!

Cringe would be a light word to call this game, but it is… Sadly the game did not feel fun to play at all, even at higher difficulties the AI was just not really doing anything and I was far ahead. I know this game is targeted for kids and for kids I can actually see this being a really good entry game.

The maps are outright boring to drive around on and all feel the same, there are more cups, but in the 2nd cup already there are 2 maps that are the same as the 1st one but just reversed.

The gameplay itself is actually not too bad for kids, the drifting just feels really strange and not really like a drift. The only issue I had with the gameplay itself is that it’s just boring and feels like a massive copy-paste from Mario Kart 8. Some of its weapons are just the regular things like shields and bombs but “kid-friendly” but there was nothing new or special about any of them that makes the game stand out.

The visuals of the game are fine, nothing special about it, and the cutscenes and characters actually do look pretty nice, but the weird implementation of “Ryan” is just a bit strange and doesn’t really fit in with the rest of the game.

While the game isn't good nor fun for anyone over the age of 12, I do really recommend this game for younger kids. But at the same time, Mario kart is almost exactly the same but a little bit harder. There is almost no story and all the cutscenes are a bit cringe-inducing for most people over 15 years old.Race With Ryan Review (Xbox One)