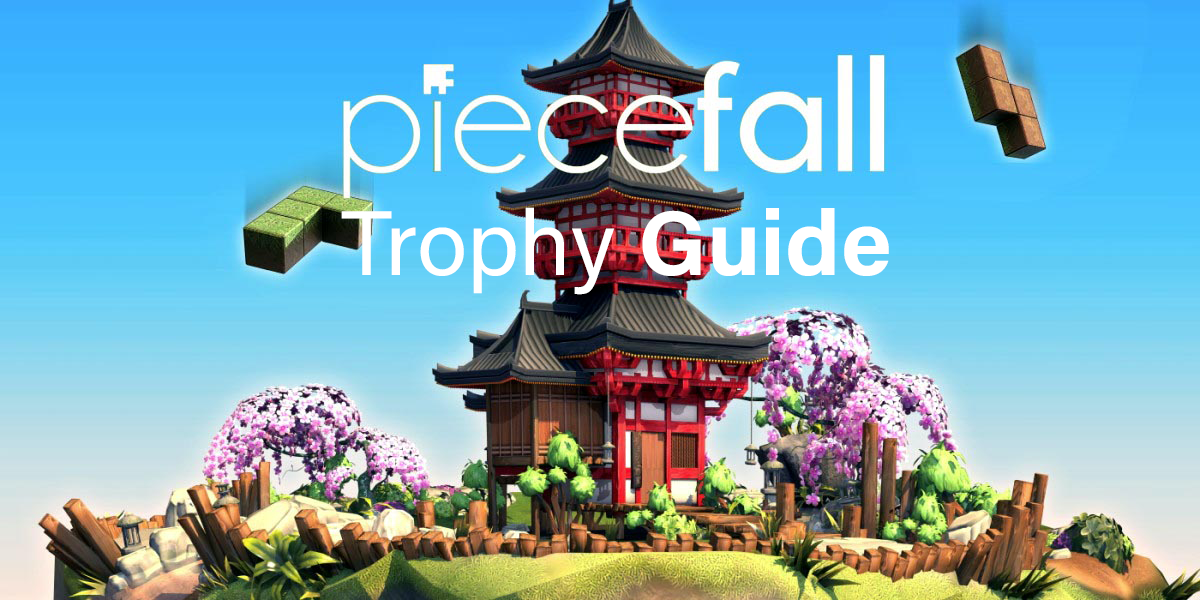 Piece of Mind
Glitched trophies: none

Welcome to Piecefall trophy Guide! a Tetris-like game where you have to complete puzzles. This game is an easy 100% except for the

Nerves of Steel trophy that requires to finish the game on Expert mode in less than 10 minutes.

For this 100%, you need to play the entire games two times: one in normal mode and one on expert mode.  You will need a lot of practice to memorize all the puzzle patterns too so you will replay every single level a lot of times.

There will be some images that show all the puzzle patterns for every single level in the corresponding trophy which will help you. The order on how to place the pieces is:

Step 1: Normal mode
Play the game in normal mode while becoming confident with the controls and the puzzle style. An important thing is learning where the pieces of the puzzle will fall by looking for its shadow on the ground and memorizing the puzzle pattern.
Every stage is composed of three rounds:

To unlock the last level (Zen Garden) you will need 6,000 points, so keep doing levels until you reach the goal. After completing the first run select “continue” and collect 10,000 points to unlock the expert mode for the third stage.

Step 2: Expert mode and miscellaneous trophies.
In this stage, you will do the entire game in expert mode many times in preparation of the speedrun (it depends on your memory and ability skills). In expert mode, the pieces will fall faster than in normal mode so you will have less time to put them in the right place. Try to be as fast as possible and always speed up the pieces with the

You can do all the miscellaneous trophies too while training:

Step 3: Speedrun
This is the last and the hardest step of the game. You will need to complete all the levels in Expert mode in under 10 minutes. Here are some useful tips:

Here there are the four images which explain all the puzzle patterns of all the four levels: 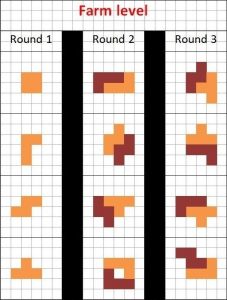 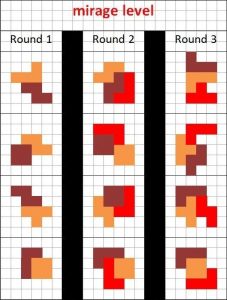 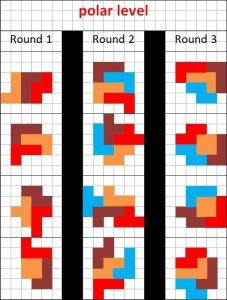 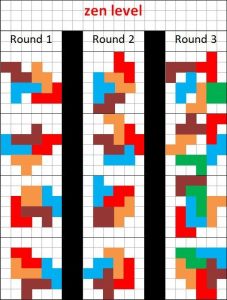 During this step you’ll earn the last  trophy needed for the 100%:

This is the hardest trophies of the set and the last one you will probably earn. Take a look at the Step 3 section of the guide for more hints on how to make your life simple.

Reference times that are recommended to go for are:

In order to unlock this trophy, you will need to do all the four levels without any errors. Take a look at the Step 3 section of the guide to find all the images that show the correct patterns of every level.

To unlock the expert mode you will need to collect 10,000 points in the normal mode, after that you can select it from the main menu.

For this trophy, you need to complete the entire game in this difficulty. In this mode, the pieces will fall a little bit faster than the normal mode, giving you less time to think about what are you doing. Do a lot of practice on this mode because you will need it for later for the speedrun.

This is the last level of the game and it’s the hardest one to complete due to the high number of pieces. To unlock it, you will need 6,000 points in the normal mode. The first round and the second of the last level have four pieces and the third has five pieces.

This is the third level of the game, complete it to unlock the trophy. The first round of the third stage has three pieces, the second and the third have four pieces.

This is the second level of the game. Complete it to obtain the trophy. The first round of the second stage has two pieces, the second and the third have three pieces.

This is your first level in the game, complete it to obtain the trophy. The first round of the first stage is a tutorial with a single piece, the second and the third rounds have two pieces.

To get this trophy, you will need to replay a level, so go to the main menu, choose “level select“, and replay complete three rounds of a level (the fastest one is the Farm Level). You will surely obtain it while doing practice for the speedrun.

For this trophy, you will need to turn a piece 12 times in a row, so keep flipping it until the trophy pops. There is no need to put it in the right place, but if the trophy doesn’t pop, try to place it right after the 12 flips.

Start a puzzle, fail it five times in a row by putting a piece in the wrong place, and then complete it to make this easy trophy pop.

You will need to complete an entire game without using hints. Hints are shown in the “game over” screen only after a couple of failures; there will be a new option that gives you hints, DON’T USE them until the end of the game and you’ll achieve this trophy.

This trophy requires you to watch the credits until the end. Select the “credits” option in the main menu, watch them until there are just icons on the screen, then press

to make the trophy pop. Remember that you can only achieve this trophy after beating the game for the first time. If you start the game and you watch the credits before clearing it, the trophy will not unlock.