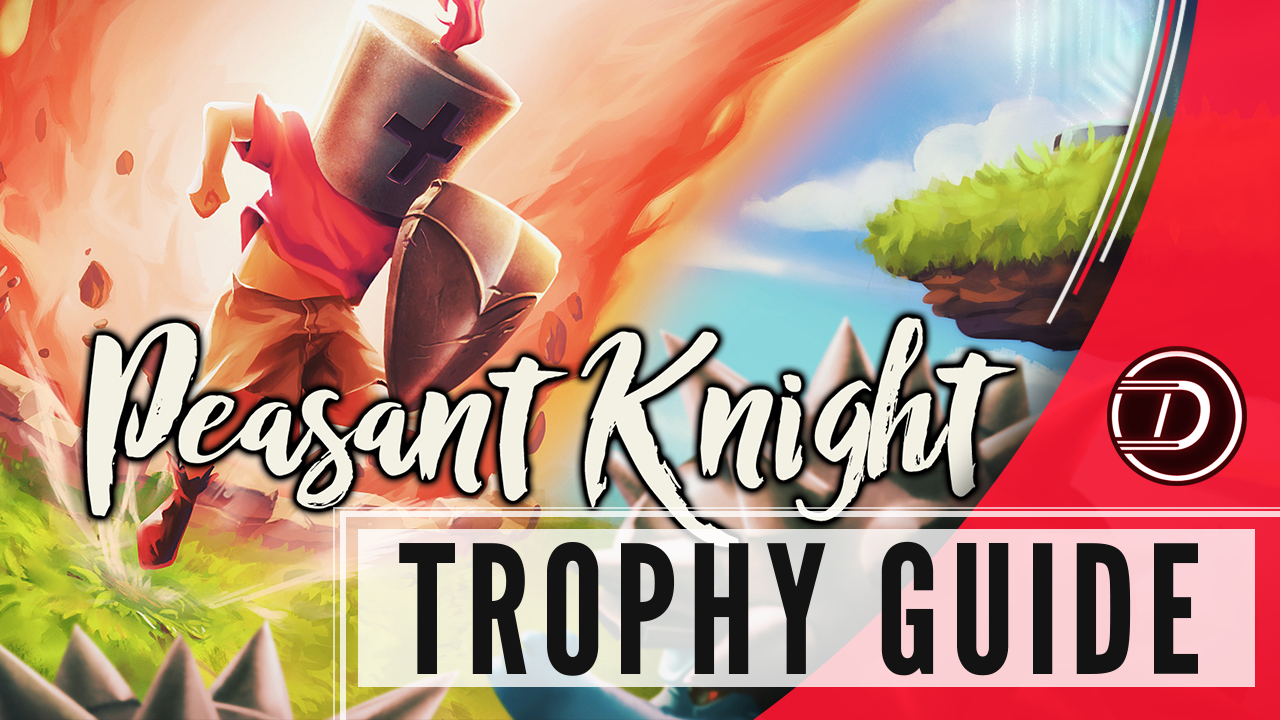 Welcome to the Peasant Knight Trophy Guide! This game is an automatic runner with a few rough levels and a quick trophy list.
Can you survive all the traps and make it to the platinum in this quick little adventure platformer?

Step 1: Play the game until you reach Level 47

Play the game and have fun. It’s an automatic runner so it takes some time to get used to it, but it’s fun nonetheless. Also, you don’t even have to beat the whole game to get the platinum! Bonus! By the time you reach level 47, you should have every other trophy.

For this trophy, you must simply complete 30 levels. Once you finish level 30, the trophy will unlock!

In order to get this trophy, you must use a green portal. Green portals are first introduced in level 24, and they just teleport you to another green portal. After you use your first one, the trophy will unlock.

This trophy requires you to use a red Portal. Red portals are first introduced in level 25. Red portals simply teleport you to another red portal. When you see it, run into it and the trophy will unlock.

​NOTE: ​​​​There have been reports from other players that this seems to only be obtainable on level 25 where the red portals first appear.

For this trophy, all you have to do is use a yellow portal. Yellow portals are first introduced in level 28 and teleport you to another yellow portal. After you use one, the trophy will unlock.

This trophy requires you to activate a flame pit. Flame pits first appear in level 2. You activate one while going through the level, so the trophy will pop no matter what on the 2nd level.

To be able to unlock this trophy, you have to die by running into a saw blade. Saws are first introduced in level 12. Simply start the level and run into the first one you see and the trophy will unlock.
For this trophy to unlock, you have to die to a flame pit. When you start level 2, just keep running and you’ll get this automatically.

when you start any level, let the timer out, and get hit with lightning. Once you do, the trophy will unlock and you will die.

The requirements for this trophy are easy, just fall off a ledge and die. The first time you can do this is in the 6th level. After you dodge the fire pit, just keep running and you’ll fall off the ledge to your demise, and then the trophy will unlock!

To get this trophy, you have the best level 29. This level is a little different from the other levels so far, as there is an enemy. It is a skeleton. He has a hand on each side of him that you must dodge. When you get past his hands, there is a lava pit that you have to be careful of. Dodge it, then enter the portal. Now make your way past the skeleton again, and this time the lava pit doesn’t go off, and enter the portal a second time. Now, when you get to the skeleton, you can jump on his head, into the portal, beat the level, and unlock this trophy.

To be able to unlock this trophy, you must kill an orc. The first orc appears in level 30, and when he sees you, he will run at you. Once you start the level, take a few steps, then stand still holding

. When the orc sees you, he will run at you. Wait a second, run forward, and activate the fire pit. When the orc runs into it and dies, the trophy will unlock.

The requirements for this trophy are as simple as reaching an ice level. Unfortunately you don’t reach an ice level until level 39! When you reach level 39, the trophy will unlock right at the start though.