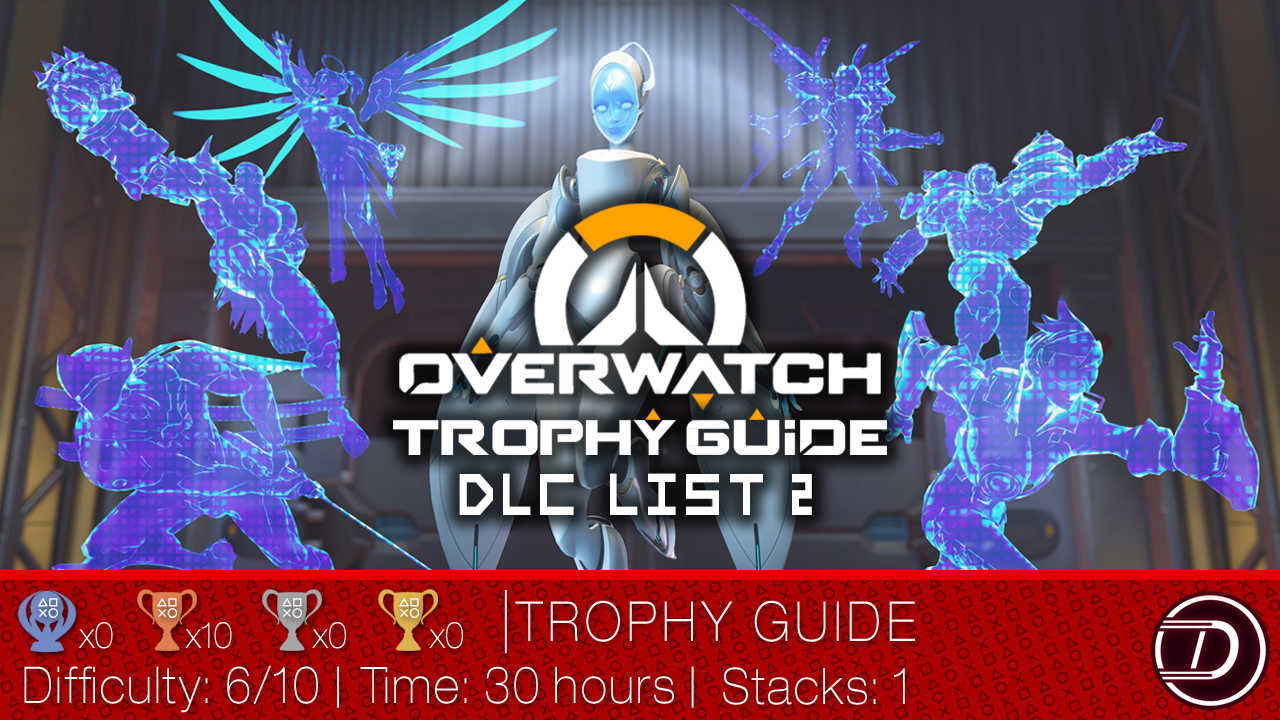 Welcome to the OverWatch DLC 2 Trophy Guide! Overwatch continues its tradition of adding a couple of bronze trophies every few months with in-game updates, and now they’re continuing onto a second DLC pack due to them hitting the limit for the first DLC set.

How To Boost – Classic Quickplay

First things first: Is it even possible to boost in Overwatch? Yes, it is, a lot of people do not know that,

Here’s how you can boost trophies by having friends on the enemy team making most trophies base game and DLC easier.

You can checkout boosting methods and find boosting partners on the DexDotExe Discord Server. Every Saturday there is a giant boosting session with 20+ people.

For this trophy, you need to absorb 1500 damage with Wrecking Ball’s Adaptive Shield without dying. This is very simple as all you need to do it use your adaption shield and when you lose it (from being damaged) press

and roll away to safety. There’s not much else that can be said besides to avoid combat.

Note: This trophy can also be boosted with 1 other person

This sounds harder then it is, all you need is to get on a capture/assault map, such as Hanamura, Lijiang Tower, and Nepal. These are the best maps, but it can be done on others and on escort maps if you grapple on the escort vehicle.

The idea is to grapple on to the circular objects in the center of the capture points (see the images below). This will allow you to spin around the whole thing if there are 4 enemies then you have a high chance of hitting all of them since the capture areas are quite small on the maps listed above. To roll through the enemies, you need to be spinning fast enough to see flames around you. You will have to constantly be spinning the joystick (

) in circular motions to be fast enough to be on fire and roll through enemies. 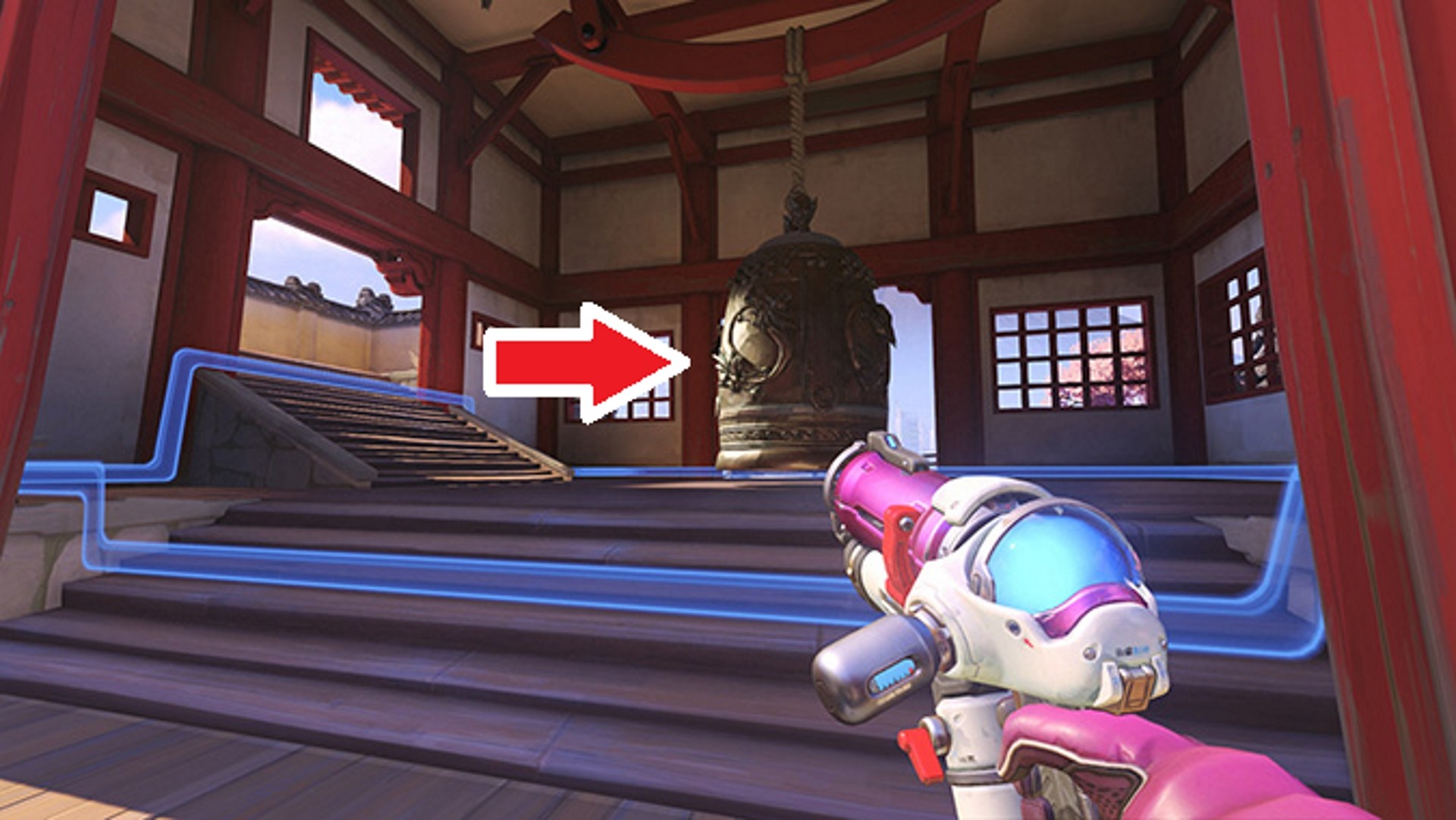 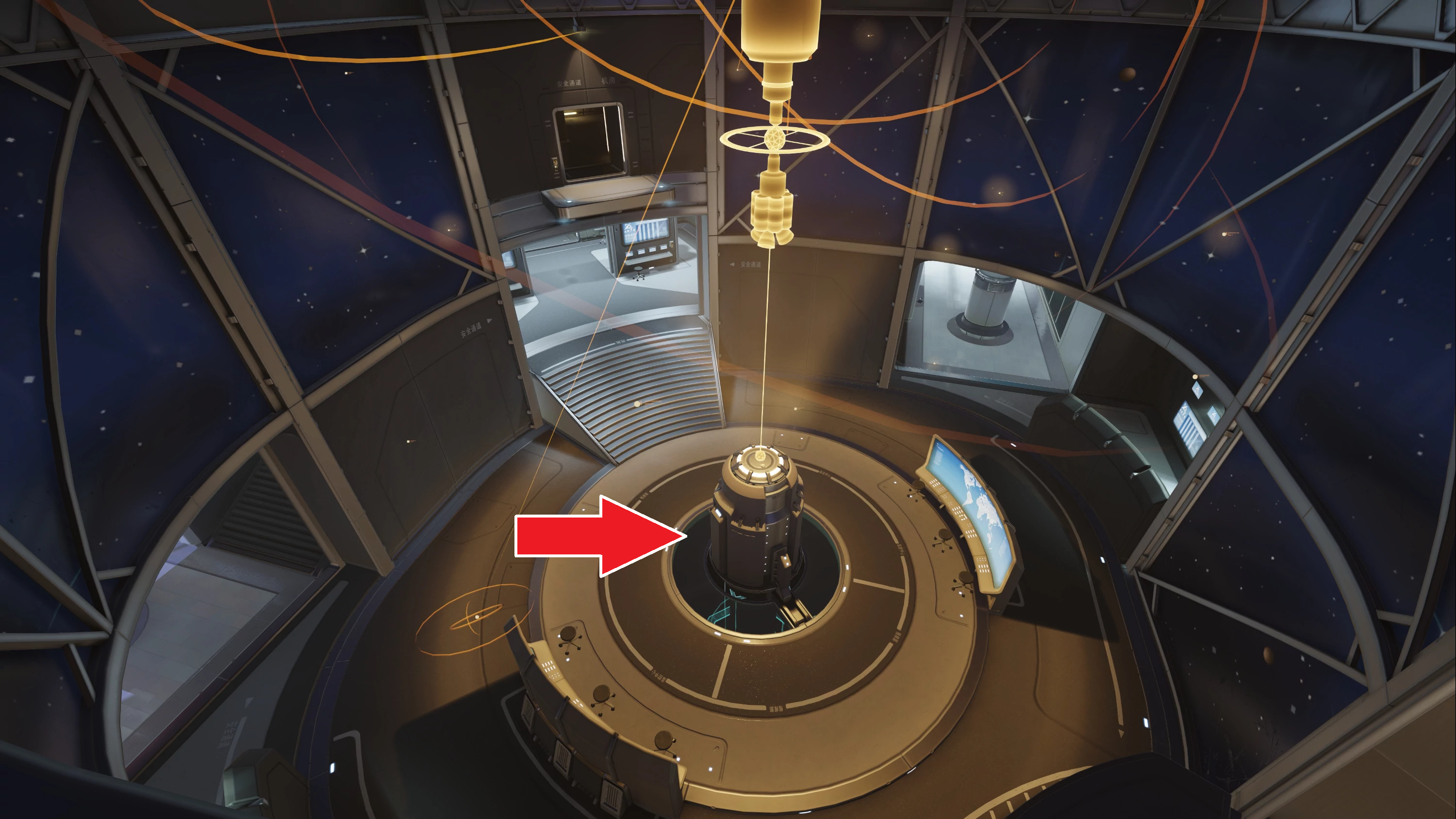 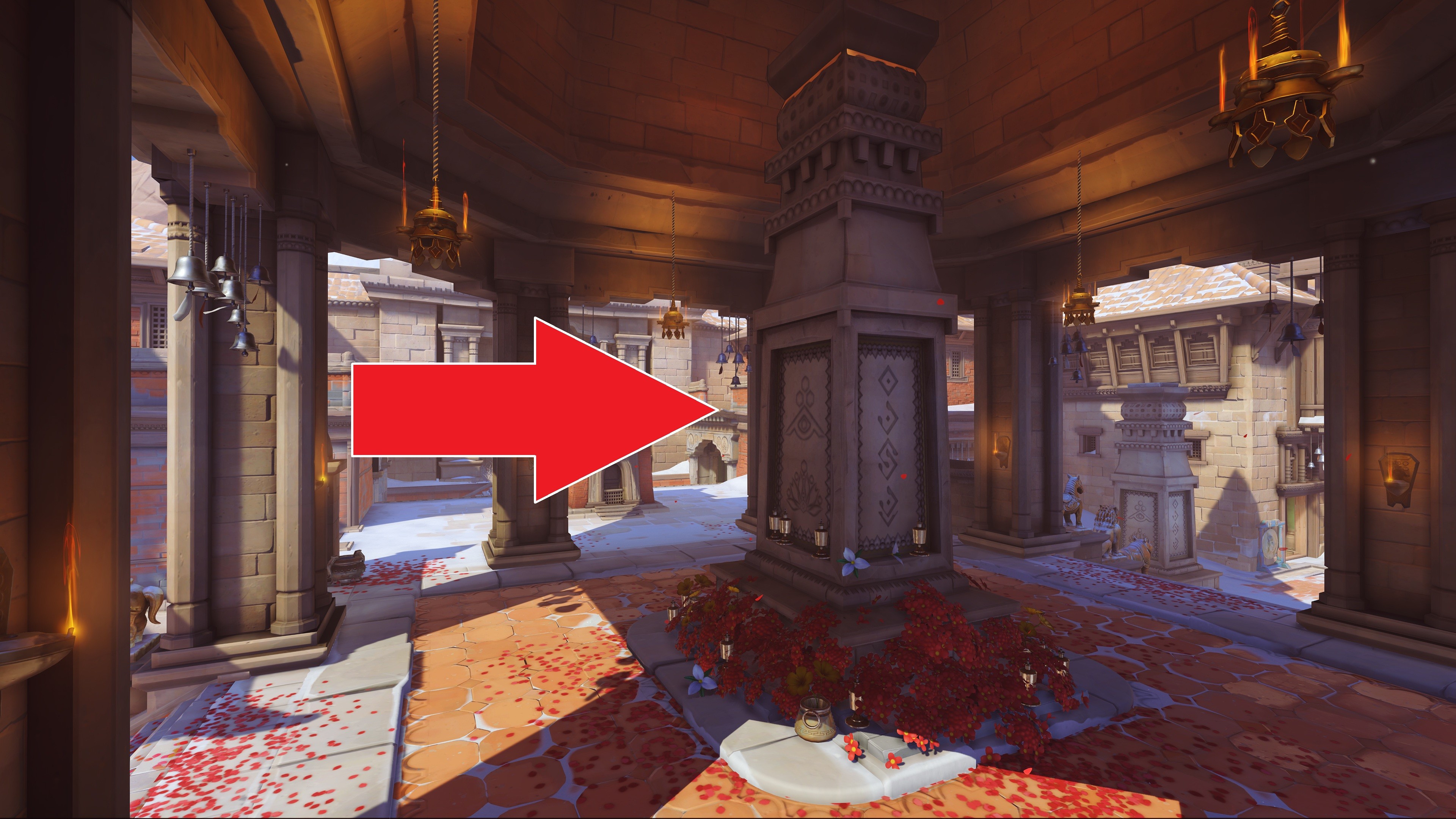 Served Up: Get a killing blow as Ashe on an enemy knocked into the air by B.O.B. in Quick or Competitive Play. This is a simple yet, tedious trophy.

B.O.B. is Ashe’s ultimate. When deployed B.O.B. will rush towards the direction deployed in. If B.O.B. hits an enemy gets hit by B.O.B. while he is rushing through, he will launch the enemy in the air. When he does you have a short period of time to kill the enemy while the enemy is in the air.

You need to be quick because if B.O.B. hits a wall or travels a specific distance he will start to shoot at the enemies and might kill the enemy before it hits the ground.

You have a short period of time to kill the enemy while it’s in the air before the enemy lands or B.O.B. kills it. you’ll most likely get this by hitting a lucky headshot, maybe aim done sights if you trust your fine-toned aim or auto-aim.

This can also be boosted with one other person on the enemy team.

Short Fuse: Kill an enemy by shooting Ashe’s Dynamite from at least 30 meters away in Quick or Competitive Play. The first thing to address is how far are 30 meters in Overwatch? Well, It’s about as far as Ashe can throw it. For a demonstration of how far 30 meters is look at the image below for a reference of 5 meters. 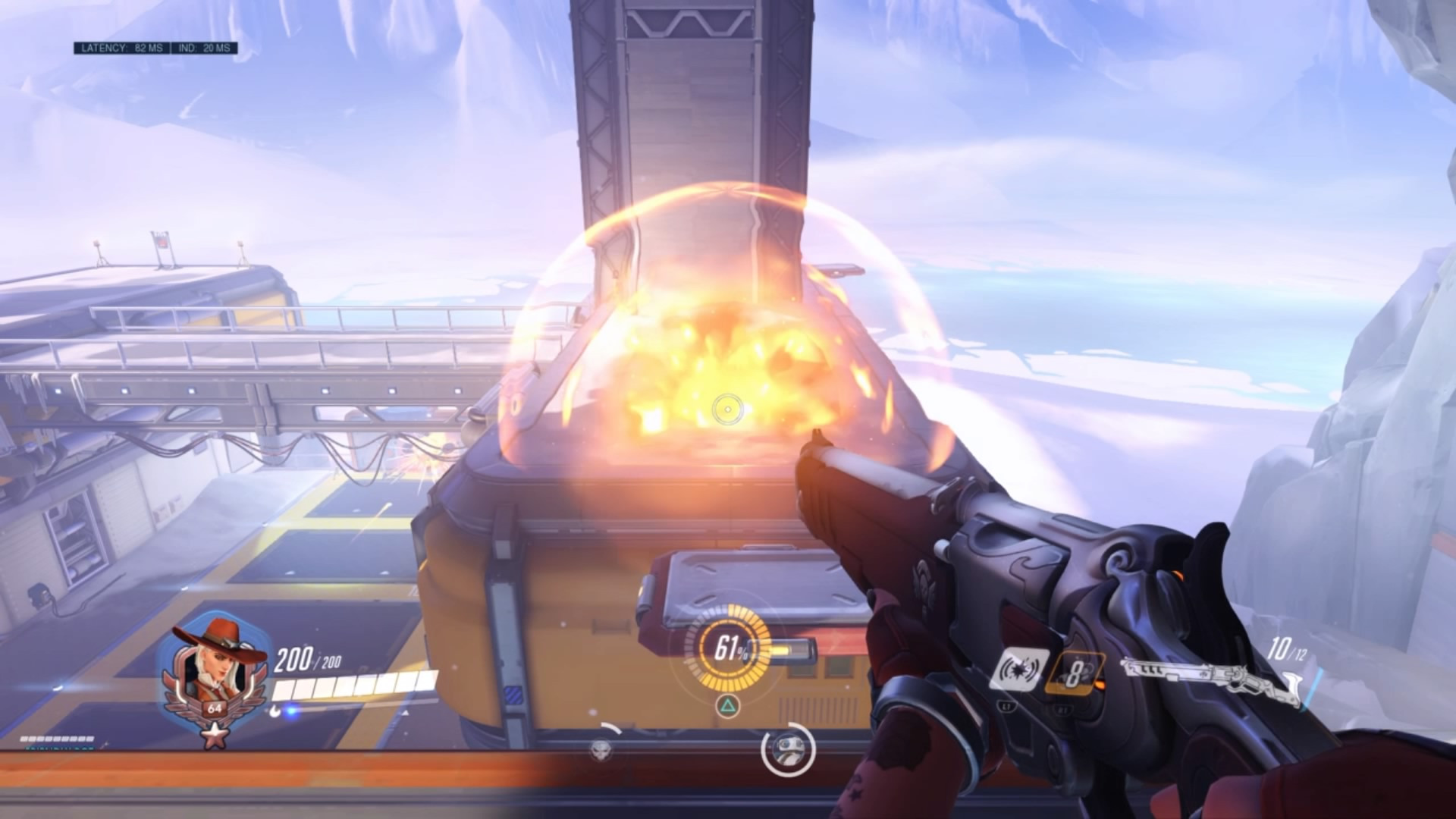 The blast radius of the Dynamite is 5 meters so you need to throw it 6x its blast radius. Don’t let this overwhelm you

The best method is to throw the dynamite and then try to shot in mid-air without aiming down sights (Aiming down sights can mess you up because of auto-aiming on an enemy) once you hit an enemy with it, if it doesn’t instantly kill them from the blast, RUN! the DOT (Damage over time) effect (Burn) may still kill them so you can run away to get extra far from the enemies but you tag. But, you must get the killing blow (Final hit) and be far enough way and also have hit the bomb with a bullet to make it explode prematurely.

This can also be boosted with one other person on the enemy team.

This trophy requires you to amplify 2500 Damage OR Healing (OR not AND) These can be combined together to form 2500.

To amplify damage, you must use your Ult ability. This places down a blue rectangle that when a bullet is shot through it, it is amplified

An important thing to remember is that not all damage gets amplified. For example, McCree’s Ult ability, even if behind the window his damage output will not be amplified.
Although it is not tested the same can be assumed for

These ether, Aren’t projectiles that count when going through the window or are passive/Don’t deal damage.

This can also be boosted with as few as one other person on the enemy team.

The strategy for two people is.

To earn this trophy you must use Sigma’s

Ultimate ability which allows him to lift up any enemies in the “Area of effect” and then they are shoved down to the ground were they receive the damage of the ultimate, The ultimate does 50 damage with the lifting and then 50% of the enemies maximum HP with the slam, so if an enemy has 500 max HP then the ult will deal 250 to that enemy. If 300 then it’ll do 150 damage to that enemy.

This trophy is very buggy and has the tendency to not pop even when you get 3  or more killing blows.

It is said to bug out in the new “role queue comp” mode but for me, it bugged in “quick play” so it might just be an unstable trophy.

To get this trophy, you must use the

The easiest way to get this trophy is to just stand in front of a bastion and absorb as much of its turret damage as possible and the trophy will pop no problem.

This is the easiest of the 2 Echo trophies.

This trophy requires you to use Echo’s Ultimate twice plus using the secondary Ultimate from the original.

Echo’s Ultimate allows her to transform into a duplicate of someone from the enemy team and from there on you’ll be able to use all of their abilities including their Ultimate, however, this secondary Ultimate will need to be charged. Ultimates charge x6.5 faster when she is a duplicated hero. You will have to get through this twice without dying for the trophy.

Some Hero’s are better to Duplicate than others due to faster Ultimate charges, due to needing fewer Ult-Points represented by the number in brackets. These Hero’s include but aren’t limited to:

These Hero’s have the lowest amount of Ult-Points needed to get to 100% Ult-Points are how fast the Ult takes to charge.

Hero’s that aren’t recommended are but not limited to:

If you are struggling with this trophy try finding a friend to play mercy and pocket heal you.