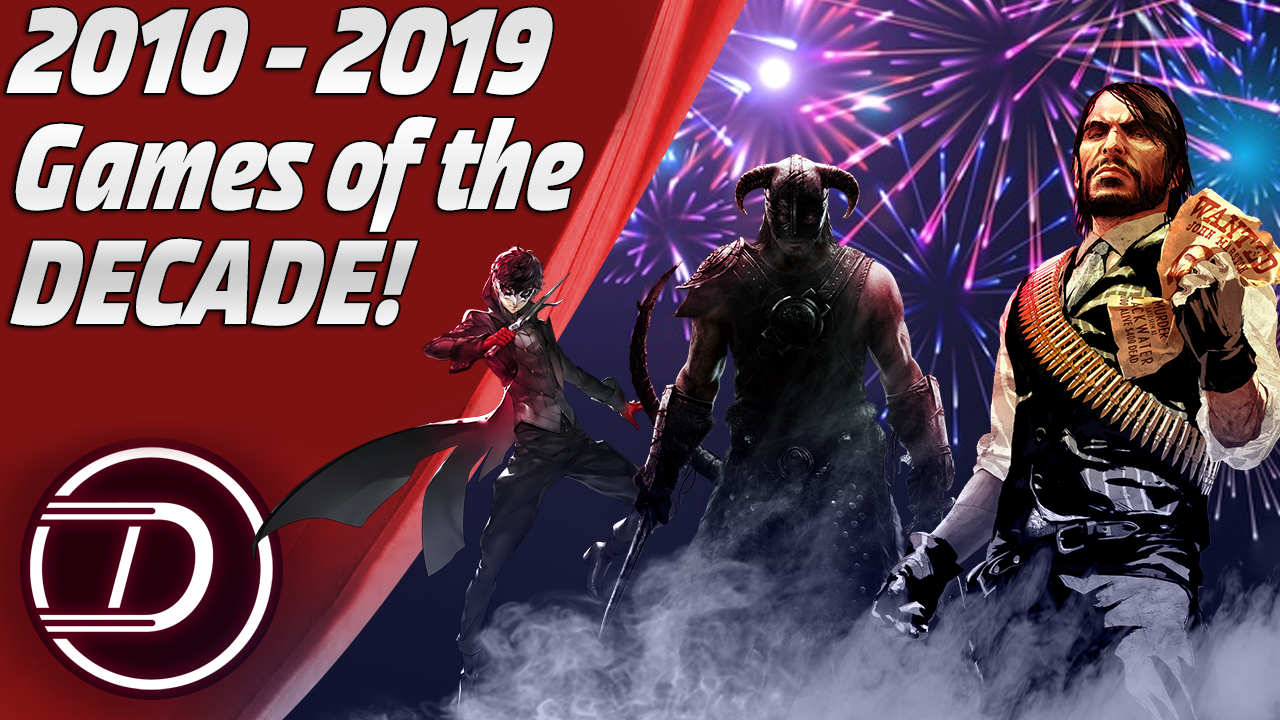 We want to thank everyone for this amazing year and we hope to be back and better than ever in the new year!

The team and I want to wish everyone a Happy new year! – Dex Fragg

My Game of the Decade is a game I played late into the decade, as this year late, and that is Persona 5. Persona is a game I heard of before but never really cared about, but when I finally got to play it, it blew my mind. I had never played anything like that before, the combat, the story, the art style. Everything just felt new and that is what a lot of games lack these days. Another game that made everything feel new to me was Death stranding, but that game also felt generic in some ways with the UI and graphics, and to be honest, after completing the story, going for the platinum trophy kinda felt like a bore-fest. But enough about Death Stranding.

Persona 5 is a game that drew me in with the story and the characters, the game felt so different every time you got to a new Palace so it never got boring. Something that was also new to me was thinking ahead, I shot myself in the foot pretty early on because I was reckless with the item usage, games nowadays give you everything you need and more, this game needs you to manage your items so you don’t lack the items later on because it does get harder the further you get into a palace.

I can’t wait till Persona 5 Royal comes out. It comes out next year, does that mean I can pick that in 10 years to be my Game of the Decade again?

So this is my Game of the Decade, I also have some honorable mentions as well, these games gave me the same feeling I had with this one.

Choosing just one game over the past decade was one of the hardest decisions I have had to make in a while. There have been so many games that have been released across all the platforms over the last 10 years, and I kept that in mind while writing this piece. I was not biased towards any platform, and put a lot of thought behind my decision.

I did not know how to pick my game of the decade. Do I pick the game I put the most time into? Do I pick the game that started my love of trophy hunting and gaming? Do I pick a game that I enjoyed, but others did not like or might not even know exist? After all of this thought, I ended up going with the game that had me on the toes from the literal beginning, as well as easily shaped the future of gaming when it comes to the story, game play, and even the multiplayer.

The Last of Us
I chose The Last of Us for many reasons. The Last of Us came out in 2013 for the PlayStation 3. Throughout the entirety of the game you will form a unique bond between the characters Joel and Ellie. This story really nails the depth of love, loyalty, and even redemption. It is one of the very few games that to me (and many others) grabs your attention from the very beginning, and keeps you entertained throughout the entirety of the game not wanting to ever put the controller down.

The story alone is enough to make this a contender for game of the decade. It is also one of the very few games that doesn’t simply rely on cut scenes to keep you in the loop of whats going on in the game. Even while playing the game and exploring the world there will be dialogue and information learned from all of the characters, making it easy to miss something if you aren’t paying attention. You truly feel like you are making a difference and fighting for something while playing this game. Within the first 10 minutes alone this game already had me in tears.

Aside from the campaign, The Last of Us has a multiplayer that is easily in my top 3 most enjoyable multiplayer experiences of all time. (My others being Bioshock 2 and Overwatch) It is not a game mode where you simply run around and shoot everything in sight. You will have to find material and ammo (similar to the campaign) to craft items to use each game you play. It also has a very unique leveling system that has a way of rewarding a player the better they perform.

There is nothing bad I can say about this game and with The Last of Us 2 right around the corner, it makes it hard not to play the game for the 100th time before its release. If that was not enough to make you want to play the game, it also offers a beautiful game/story with its Left Behind DLC which is FREE for the PS4 version of the game. This game has rightfully earned its spot as my game of the decade.

Plus who doesn’t like killing zombies in video games? 11/10 – SquidReviews

One of the decades early releases for me gets my vote this week. It’s a game that I played upon release but didn’t actually get to enjoy it until many years later.

Red Dead Redemption was released on PS3/XBox in May 2010 and achieved a Metacritic score of 95/100. The third-person gameplay introduced one of the biggest open-world maps in gaming history and enabled the player to fully immerse themselves in the storylines of John Marston during his life in a fictional American West & Mexico in 1911.

Many of the game’s components enhanced the players’ experience; from the Morality Meter changing the way in which the game plays back, to the 16 player online co-operative lobbies. The introduction of the “Red Eye” gunshot mode included a slow-motion graphical display the was simple yet explosive in its own right.

5 years in the making and a masterpiece was produced and unrivaled at the time. Many games have surpassed the achievements made during this game’s production, but for me, this is one of the original masterpieces!

This decade we had a plenty of amazing games which I can choose for this article, so it’s really, really hard for me to pick just one title but back in 2011, there was an amazing game released from Bethesda Game Studios: The Elder Scrolls V: Skyrim, an ARPG with a huge open world with infinite dungeons and quests. When I first approach this game, I was so astonished by the variety of actions, settings, enemies that this game had to offer to the player that I immediately had a heart for it enough to spend more than 1000 hours wandering around the Province of Tamriel (I haven’t discovered everything yet).
Everything was so perfectly made: the soundtrack composed by Jeremy Soule, the hand made designs, the varied gameplay styles… Everything.

When they released the three downloadable contents packs back in 2012, the game becomes even bigger: new actions, new settings etc… This did the trick again because it was like a new game for me and it was like the first time so I spent others 200 hours (more or less) to discover, explore and wander.
Speaking about trophies it was such a satisfaction to achieve the 100% of this game as it was a real journey and an amazing challenge too.

I spent a lot of time on this fantastic videogame and it took a place in my heart forever so that’s why it takes the award of “Game of the Decade”, but I have some honorable mentions too:

My choice for game of the decade is a clear choice for me. The Stanley Parable is a first-person exploration game that’s more of a narrative. This game can be completed in 5 minutes if you choose to listen to the narrator. Or, you could choose your own path. “Parable” means “a simple story used to illustrate a moral or spiritual lesson” it’s an extremely philosophical game about loneliness the need, the want for control to me. But, it’s also much more than that. If you want to know my full opinion on the game, feel free to read my review for The Stanley Parable.