Nobody Saves the World Review (Xbox One)

A hidden gem on game pass 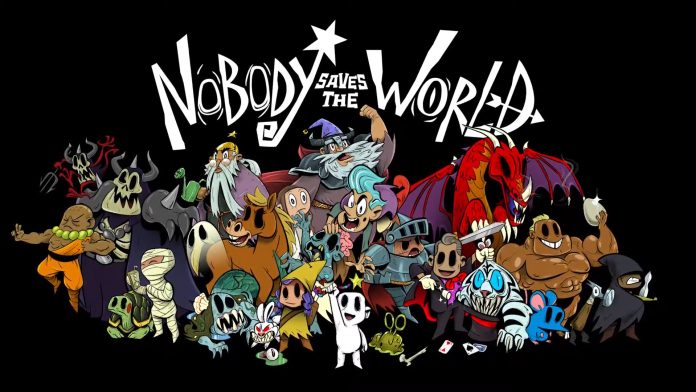 Nobody Saves the world came out on January 18, 2022, for Xbox and pc. The game is developed by Drinkbox Studios, the developer of Guacamelee!

You wake up somewhere as a white guy without eyes, a nobody, no memory, nothing. So what do you do? You go to the house of the biggest wizard in the land and steal his wand. Really normal stuff right? well, turns out the wand gives you the power to change into multiple forms. There is a catch though, you will have to unlock them by leveling up other characters. You will start off with a rat, and you will unlock a cool dragon as the last character.

Every character that you can play as in the game is just so much fun to play, but sadly, some of the characters have some really hard-to-learn controls that can be offputting for people. While playing the multiplayer with a friend I just took the characters he couldn’t control because it was just too frustrating for him. But when you do finally learn how it works and get the hang of it more, the whole game becomes so much easier.

Now that I mentioned my friend, the game becomes so much more fun with someone to play with. It can just bring up funny but sometimes stupid situations where you don’t really know who you are anymore and it causes so much chaos at times. But it’s more fun that way, especially in dungeons.

Dungeons can be super hard solo, but having someone there can make it so much easier because you can respawn as long as the 2nd player survives, so we had someone stand back with the most HP and let the one that almost died go in, do as much damage as possible and just die to be respawned. The made the game a lot easier. I almost completed the game solo as well but I just got stuck on a bit near the end even though I was kinda over-leveled.

Visually the game is not something that stands out a lot on the surface, but every area has its own cool theme and color scheme that goes with it, there is a swamp, a desert, and more. Even the characters all have a look at them and you know straight away what type of character it is and what type of attacks you can expect from them, same with the enemies.

The story of the game is probably its weakest point, and even that is pretty good. I would have liked to have a little bit more to it in between dungeons and sometimes something that would be a little bit more linear. For one of the head dungeons, you would need to get a keycode from another dungeon, stuff like that would have been fun to do more because some of the dungeons are just there, not really anything to them or have a story within.

There are a ton of sidequests that sometimes lead you to the dungeons, and those sidequests can be super easy or just really strange at times. Sometimes you would need specific characters to complete one of them. There is one with a snail that wants to see someone that died again, so you would need to get the snail character but also another character that can raise characters from the dead and make them minions and mix and match their powers.

Nobody saves the World is one of the most unique and cool games I have played in years. With amazing characters that are just fun to play as and a story with a bunch of twists and turns.Nobody Saves the World Review (Xbox One)