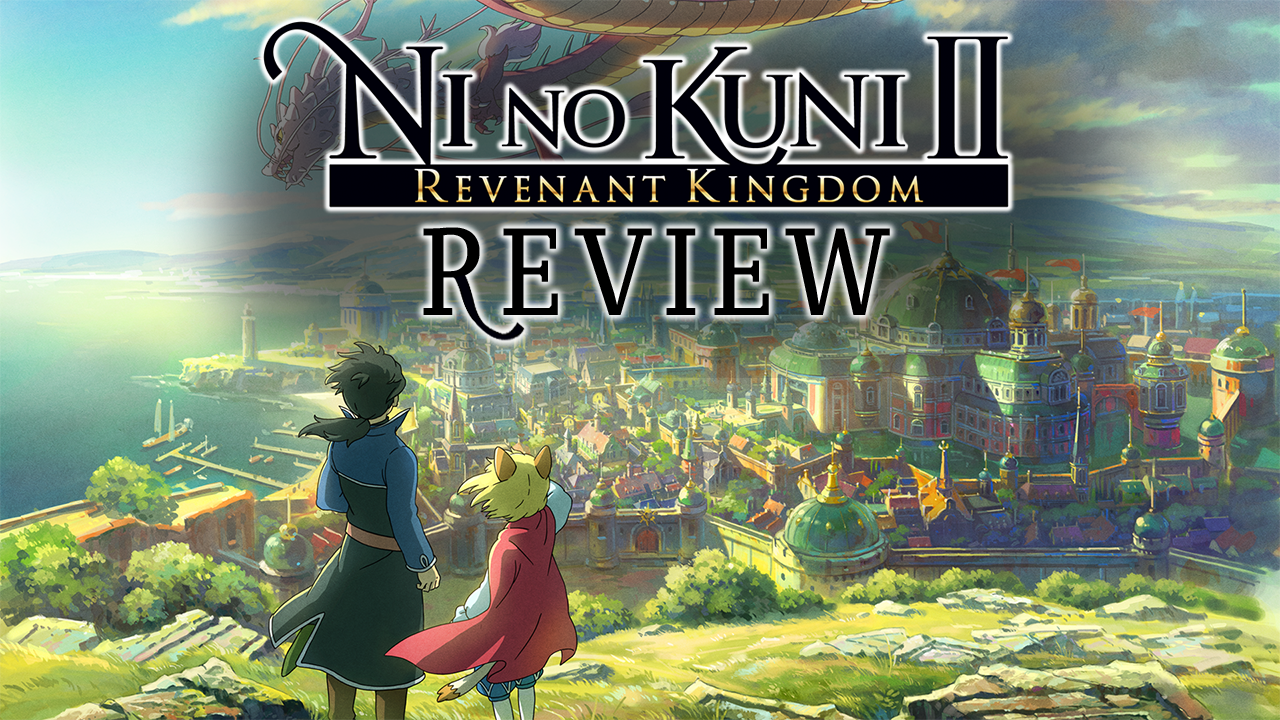 Ni No Kuni II: Revenant Kingdom was originally released in 2017 and developed by Level-5 studios. This is the second game of the successful JRPG franchise “Ni No Kuni” and it is a prequel of the first game. The game features beautiful anime-style graphics, easy and enjoyable gameplay and interesting characters. The battle system, unlike its predecessor, bets on a real-time battle system on an open field where you control and switch between 3 characters.

Lastly but no less important, the game features a kingdom management system. As you progress through the game, you’ll gain the chance to invite NPCs to your kingdom as long as you complete certain tasks. The more NPCs you invite to your kingdom the more influence your kingdom will have.

The fantasy world of Ni No Kuni II contains many breeds from which some have their own kingdoms, cities, armies, etc. Those who have kingdoms must a deity to protect them since this is what keeps the balance of the world. In order to do so, the king of each land must form a pact with a deity. These kingdoms are home to many breeds such as Humans, Dogs, Cats, and Rats. There are of course a lot of monsters and similars in the wildlands.

Set 300 years before the events of the first game, Ni No Kuni II follows the story of Evan, the young half-cat half-human prince of a big kingdom. When Evan’s father passes away and he’s about to take the crown, the rats betray him and start a riot. A mysterious man saves Evan’s life, his name’s Roland and he was from another world. Roland is a man that belongs to our world (the earth) and after his death, he finds himself in Evan’s world. Roland was a president in his world so he will be both a father figure and an advisor to the young prince throughout his adventure.

The gameplay in this game has many schemes between exploration, battle systems and build systems. For the exploration, this game is like most JRPGs, traveling around a huge map while visiting cities and towns, and battling with the local foes.

During battles, while controlling your party, Highledies (some sort of servants that help you in battle) will assist you in many ways, like buffing your party or debuffing the enemies. Each spell has an amount of mana required to use and the total amount is showed about the health bar. To use a skill, the bonus damage must be 100% for at least one weapon, once the skill is used the weapon bonus damage will drop to 0%. To increase the bonus you will need to hit the enemies with the desired weapon. Finally, each character can equip up to 3 weapons at once.

There are also the skirmishs, army vs army battles that take place on the world map. The skirmish consists of defeat all enemy forces by taking advantage of the enemy’s weaknesses and the strength of yours. This is based on a battle system similar to what we saw in the Fire Emblem series. To make an example: sword beats the axe, the axe beats the spear, and so on.

The kingdom management system works as a clicker, where you will be spending your influence, points on certain perks. The influence your kingdom gains can be used to build and upgrade the structures on it. This will unlock new perks you can trade by using the in-game currency and materials. Your kingdom will also provide you with different kinds of materials depending on the buildings you have, food from the farms, gemstones from the mines, etc.

Just as its predecessor, Revenant Kingdom has such beautiful anime-style graphics, a constant feature in most JRPGs. The landscape is very well made as well, forests, deserts, mountains, seas, cities, each looks beautiful. Water and wind effects are also very good, the character’s hair and clothes react to them fluently. Not much to say here, the game looks as good as an animated film of great production.

Like any JRPG, this is not the kind of game you beat many times due to the number of hours it takes to finish. Luckily there’s a lot to do besides the main story. Develop your kingdom, unlock the best weapons and spells, there’s even a challenging dungeon after beating the main story.

Collect materials to upgrade your weapons and spells and get stronger to fight the most dangerous foes. There’s some sort of bounty hunter lists where you will be rewarded for defeating certain enemies, real dangerous ones. Also, try to find and recruit each NPC available by completing their tasks, this will allow you to assign jobs to them. Unlock the strongest highledies by finding them on the world map or by researching on your kingdom. And many, many stuff more to do.

There are a lot of things to do besides the main story, but once you try them all they get repetitive. Recruit new citizens, complete all skirmish, find all the highledies, gain influence to develop your kingdom, over and over again.

After a tough escape, Evan and Roland start a journey to build a kingdom and unite the world. Along the way, they will make new allies, find new dangers, and work together to save the world. In order to do so, you will travel across this beautiful world by land, sea, and air. To uncover the truth of an ancient evil, Evan and his friends will need to gain the trust of the rulers of each kingdom. Finally, there are some side-quests that help to develop each character and their respective stories.

Note that this game does not have a heavy story like its predecessor or some other JRPGs. This is not necessarily bad since it is the kind of game that newcomers of JRPGs may find comfortable. That also applies to the gameplay.

Ni No Kuni II: Revenant Kingdom is a game both newcomers and JRPGs veterans will enjoy. Those last may find it childish or too easy but that does not make it a bad game.

With beautiful anime-styled graphics, enjoyable and diversified gameplay, and a catchy story, Ni No Kuni II is the kind of game you should add to your list if you like to watch anime or to play colorful JRPGs. But if you are the kind of player that prefers realistic epica graphics and thrilling gameplay, you may skip this one for now.