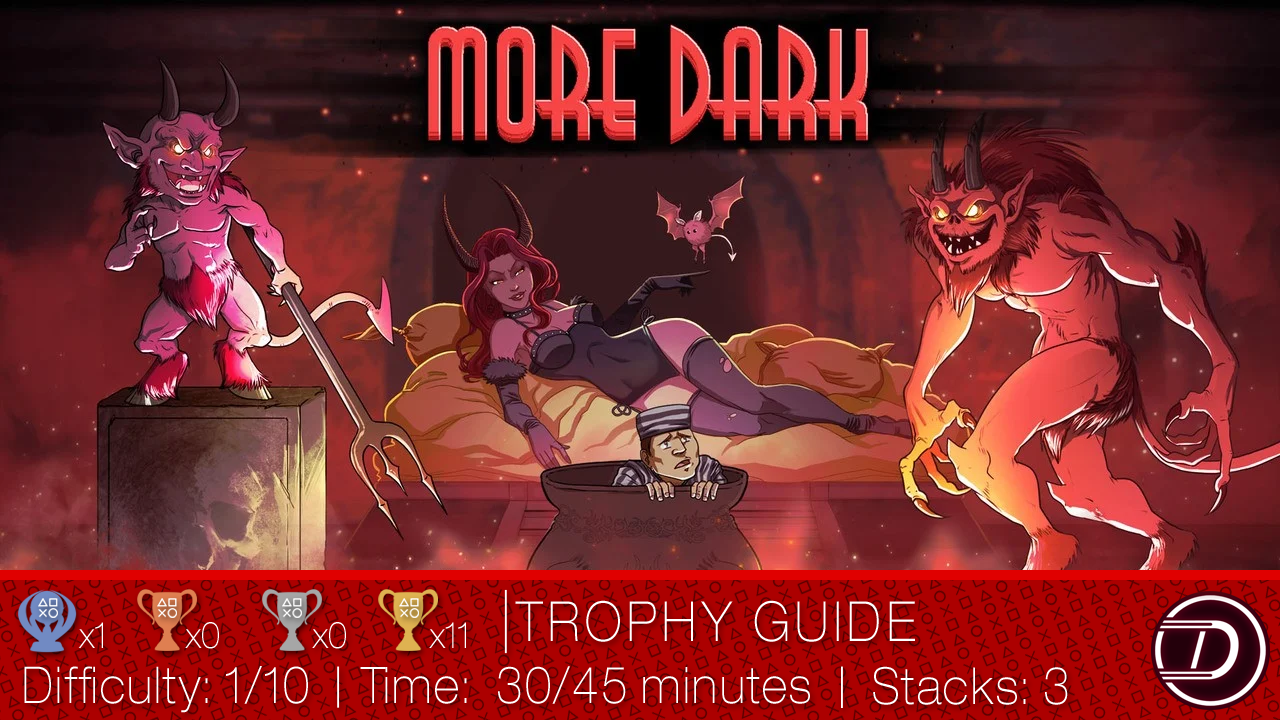 Welcome to the More Dark Trophy Guide!
return order to Hell, corral the escaped convicts and cleanse each area of chaos and anarchy. Can you save Hell, or perhaps earn redemption?
This game is developed by HugePixel and published on consoles by Ratalaika Games.

Step 1: Reach Level 31.
This will be your only step for this game if you focus on the “missable” trophies as well.
Play normally through the game but when you reach level 4, make sure to also collect the

Sandwich Time and the

Chop trophies.
From now on, it’s just a walk in the park until you collect the slime upgrade in level 31 of the game.

Once you are done, you will have all the trophies and new shiny platinum as well.

Step 2: Cleanup (optional)
This step is optional as if you have correctly followed step 1, you should already have all the trophies.
However, there are two of them that you may have missed while reaching level 31:

This trophy will pop after completing the first level.
This level is really easy as the gate will automatically open you will only have to go right by jumping over two steps to complete it.

To get this trophy, you need to complete level 10 of the first area.

This trophy will pop after completing level 20 of the first area.

This level is an Arkanoid-like minigame where you need to destroy some flies by making a poor guy on your moving platform.

Don’t worry if you lose one guy as there are infinite of them ready to be sacrificed until you complete the level.
You will need to tackle down the red bar you can see in the upper middle part of the screen to proceed further in the game.

The Dungeon area is the first area and is composed of a total of 30 levels.

The last level is a boss fight where you have to jump on the boss’ head 10 times while dodging him, the bottle he throws, and the rocks that fall from the ground every time a bottle touches the floor.
He will also move back and forth around the arena.

This trophy can be first earned in level 3 of the Dungeon area as you are obliged to jump on the head of the only enemy of the level to be able to reach the higher platform on the right.
Furthermore, you have to kill him to open the gate so you will get this trophy no matter what.

This trophy is obtained after picking up the grenade upgrade that can be found in level 18.
Avoid the spikes and pick it up from the top of the little pyramid.
From now on, you can destroy all the blocks with an exclamation mark by putting a bomb over it with the

NOTE: You are invulnerable to the explosions so there’s no need to walk away when you place a grenade but crates aren’t, so be careful.

This trophy can be attempted in level 4 but if you do, you will have to restart it.

This trophy is easy to achieve in this level, furthermore, if you choose to restart by dying or by pressing the

button, you will also get the

First Blood trophy if you haven’t got it yet.

To get it, you simply have to jump to the top platform and drop the box down whilst the enemy is on the left. Then jump down and push the box up against the left wall squashing the enemy.

This trophy can be attempted in level 4.

To get it, reach the upper platform and drop the crate from the right side when the enemy is perfectly beneath it.

The slime upgrade is located on level 31, the first level of the lounge area.
Avoid the spikes and pick it up from the top of the little pyramid.

From now on, you can place a slime with the

and bounce on it to make a higher jump.

button.
You can do this on every level.