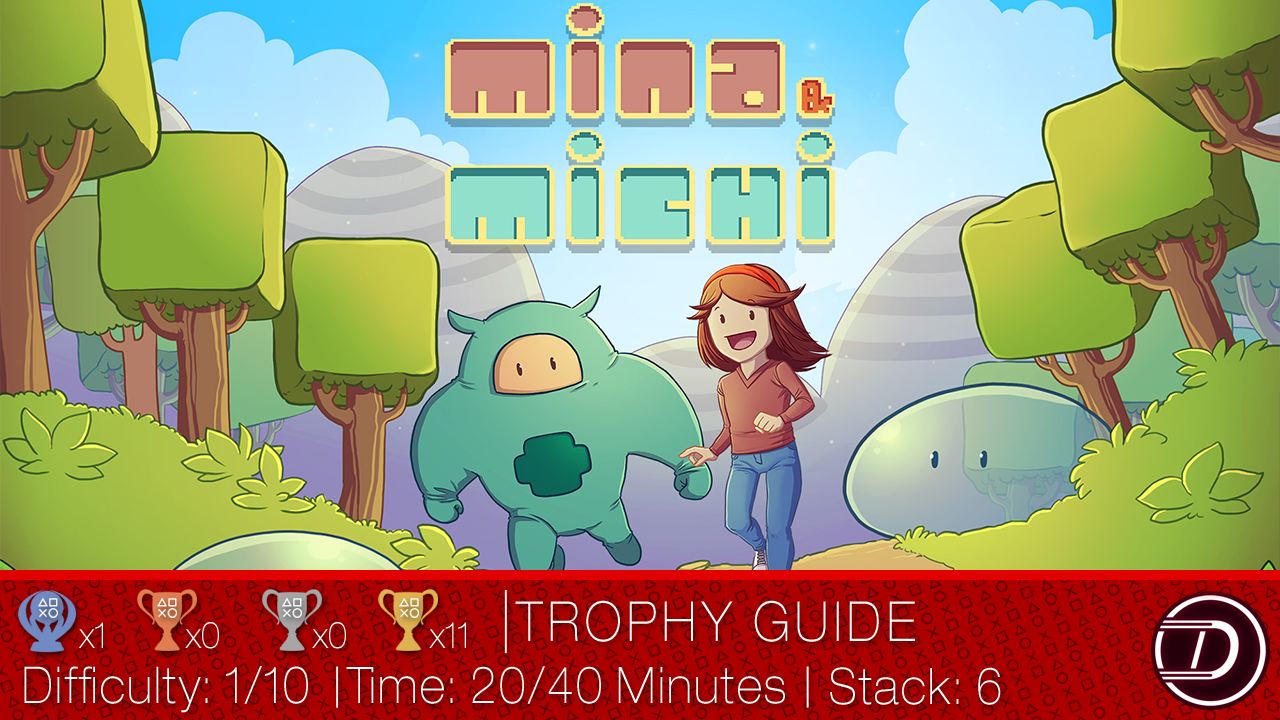 Welcome to the Mina & Michi Trophy Guide!
Mina & Michi is a 2D top-down game about a girl and her friend, going on adventures, solving puzzles, and defeating enemies through the seasons!

Step 1: Reach and beat the second boss
This game is pretty easy as all the trophies will come naturally while playing the game. To proceed, you will have to explore the different areas of the game and you will for sure bump at least on each upgrade and item you have to collect for the trophies.

The game can also be played on easy which really brings the difficulty below zero. Once you have beaten the second boss of the game, you should get the platinum.

The first silver key you will find is located right after completing the first puzzle with the boxes. You can use silver keys to unlock gates.

Golden keys are scattered through the map and you will need them to open chests.

Gloves are located right at the beginning of the game. Proceed up and move a character on the switch to open the gate on the right. You will see the Gloves right in the middle of the area.

This upgrade will allow you to move boxes with both characters.

The Amulet is located on the upper part of the area with the spiky rolling logs. This upgrade will allow you to shoot and kill enemies with both characters.

The first puzzle you need to solve requires you to have previously picked the Gloves. This puzzle is located right after picking up them so you don’t have to run back and forth to search for them.

To solve it, move the boxes on the switches in front of them and be able to open to open the gate.

As you wander around, you will find “secret” areas where you can obtain heart upgrades. They are easy to spot and they are the same as the trophy icon.

As you wander around, you will find “secret” areas where you can obtain stamina upgrades. They are easy to spot and they are the same as the trophy icon.

To get this trophy, you need to lose some of your hearts first by getting hit by a ghost or by a trap.
After that, you can recover your health by picking up food.

Food can be found upon defeating an enemy or as a drop from the different bushes around the map.

Ghosts are the first type of enemies you will meet during the game. You can defeat them by shooting at them with both characters.

The first boss is Greeny, the almighty.
You will need a silver key to enter his area so make sure to have at least one of them in your inventory.

This boss is basically a giant ghost that splits itself once you hit him.
His health is displayed on the lower left side of the screen: he has 6 hearts and you only damage the boss when you hit the ghost with the eyebrows. Shoot at him 6 times and you will defeat him. He will also drop the Gem of Power upon death.

The second boss is Cubo, the angry.
As for the previous one, you will need a silver key to enter his area so make sure to have at least one of them in your inventory.

This boss will charge you right when you enter his area. Move back close to the green gate and shoot at him 6 times for an easy kill.
He will also drop the Pickaxe upon death.