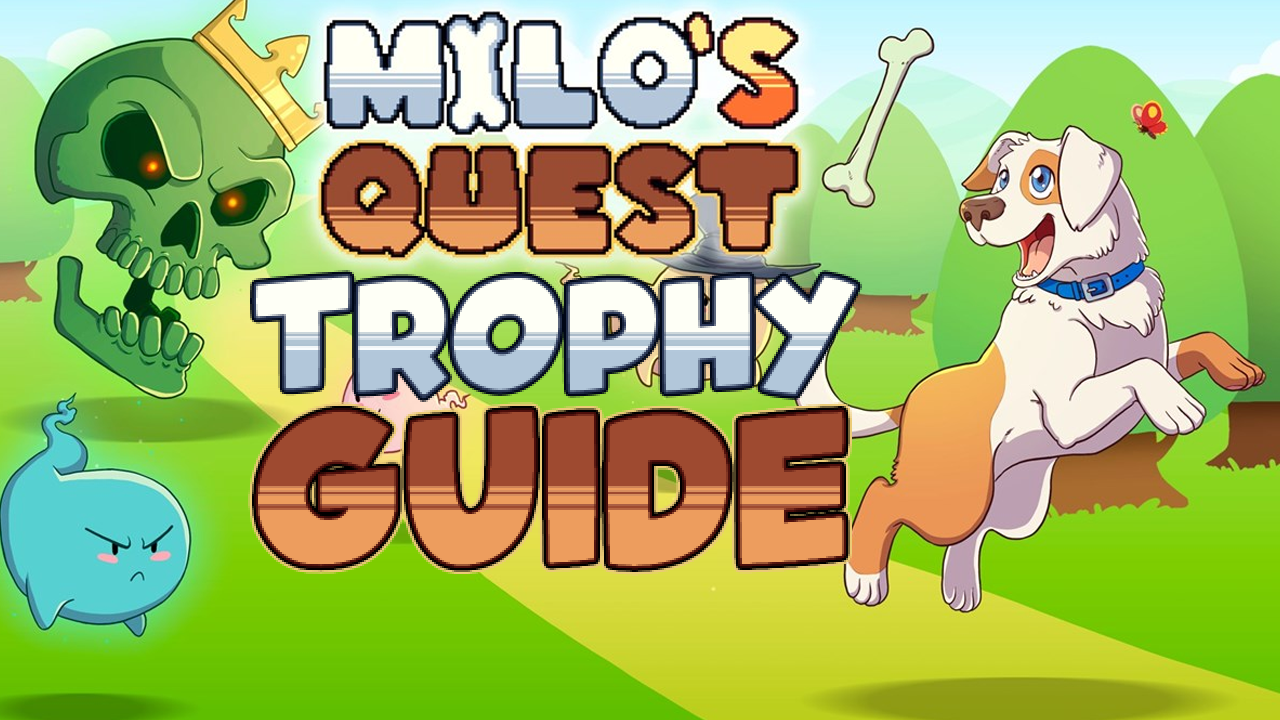 I Can See Things

I Was Getting Tired
Glitched trophies: None
difficulty related: None
Playthrough: 1

Welcome to the Milo’s Quest Trophy Guide! Follow Milo, a young pupper, on his adventure and help him to stop the curse of the Evil King Old Skull. This game has been developed by lightUP and published by Ratalaika Games.

You can play the game on Easy Difficulty as there are no difficulty related trophy. Then you can choose to do Adventure Mode first and Puzzle Mode after or viceversa. The fastest way to proceed through the game will be listed below in the Walkthrough section of this guide.

Milo Is A Smart Boy

Step 2: Adventure Only Mode
If you want to easily get the platinum trophy, on this step your main focus will be to follow the video walkthrough posted below in order to discover the fastest way to find keys and objects you will need to progress in the game.

I Can See Things

I Need To Pass Through

I Was Getting Tired

Nothing Can Stop Me

Three Against One Is Not Fair

Silver keys are used to open Silver Gate. You need to collect them to make progress in the game. However, you can collect your first Silver Key in the third area of the game: as you start the game, follow the path, pick up the glove, push the boxes away to pass through the path and get into a new area. Here, follow the path until you reach a crossroads and turn left. From this point, go down and straight on, then go left again and go straight up to find the Silver Key.

Golden Keys are used to open Extra Chests spread around the world. Unlike the Silver Keys, they are optional so you could not collect them adn complete the game. However, for this trophy, you need to collect at least one Golden Key. The first one is located in the same area of the Silver Key: as you start the game, follow the path, pick up the glove, push the boxes away to pass through the path and get into a new area. Here, go straight up insead of turning left. From thie upper right corner, go left then go down again to find the Golden Key.

Bones are the currency of the game and you can collect them by passing through the bushes or by killing enemies. This will be your first trophy too as you are forced to across some bushes at the beginning of the game.
Bones can be used to open specific gates and gain access to extra lives or stamina bonus or chests.

You will get the Worker’s Glove at the beginning of the game. It’s located in the middle of the path of the second area of the game. When you collect it, you will be able to push boxes by holding

You are forced to collect the Strong Helmet to progress through the game. You can find it after opening the first gate of the game: when you across it, there are some ghosts as enemies, ignore them and turn right to get to a new area. go all the way to the right until you reach the new area. Here, go up and you will find the helmet which gives you the ability to kill ghosts by pressing

MISSABLE
This trophy is labelled as missable because you can also decide to not collect the boss drop.

Binoculars are dropped by the Big Marshmellow Boo Boss (check

Nothing Can Stop Me for more details on how to kill the boss). Kill the boss and pick up its drop to unlock the trophy.

MISSABLE
This trophy is labelled as missable because you can also decide to not collect the boss drop.

Binoculars are dropped by the Super Pumpkin Bros Bosses (check

Three Against One Is Not Fair for more details on how to kill the bosses). Kill the bosses and pick up its drop to unlock the trophy.

In order to kill ghosts, you will need to have the Strong Helmet which allows you to attack them (

Head Butting for further details). During the game, you will need to kill ghosts in order to open Purple Gates. To get this trophy, simply kill 20 of them.

To get this trophy, you need to start a new game in Puzzle Only Mode. As you start the game, go on following the path and collect the Worker’s Glove which gives you the ability to move boxes by holding

. Then go on and push all the 3 boxes on the red buttons to complete your fist puzzle and to unlock the trophy.

MISSABLE
This trophy is labelled as missable because you can also decide to not collect the extra heart extension.

Your first heart extension can be found after opening the first gate of the game: across it and you wil find an area filled with ghosts. Ignore them by passing through them and turn right to get to a new area. Then keep heading right until you reach the next one. From now, turn left and you’ll see and heart: pick up and you will unlock the trophy.

MISSABLE
This trophy is labelled as missable because you can also decide to not collect the extra stamina extension.

Your first stamina extension can be found in the second area filled with ghosts behind a Purple Gate. To get it, you will need the Strong Helmet (check

Head Butting trophy for further details) and then kill all the enemies in this area to unlock the gate and be able to reach the Stamina extension needed for the trophy.

To recover a heart, first of all you will need to get hit by a ghost then you have to find a Food Item which are dropped by killing enemies or from bushes. Collect one of them to recover one or more hearts and unlock the trophy.

This will be the first boss you will face up to in the game. It has four hearts so you need to hit him four times to defeat it. To kill him, just keep running away paying attention to the little flames he leaves on the ground. When the boss stops burning and stops, you’ll be able to attack him and defeat him.

This will be the second boss you will face up to in the game. There are 3 pumpkins but the real boss is the one with a bubble around him. It has four hearts so you need to hit him four times to defeat it. To kill him, first kill the 2 pumpkins without the bubble and then you can attack the main pumpkin as the bubble which protects it will disappear.