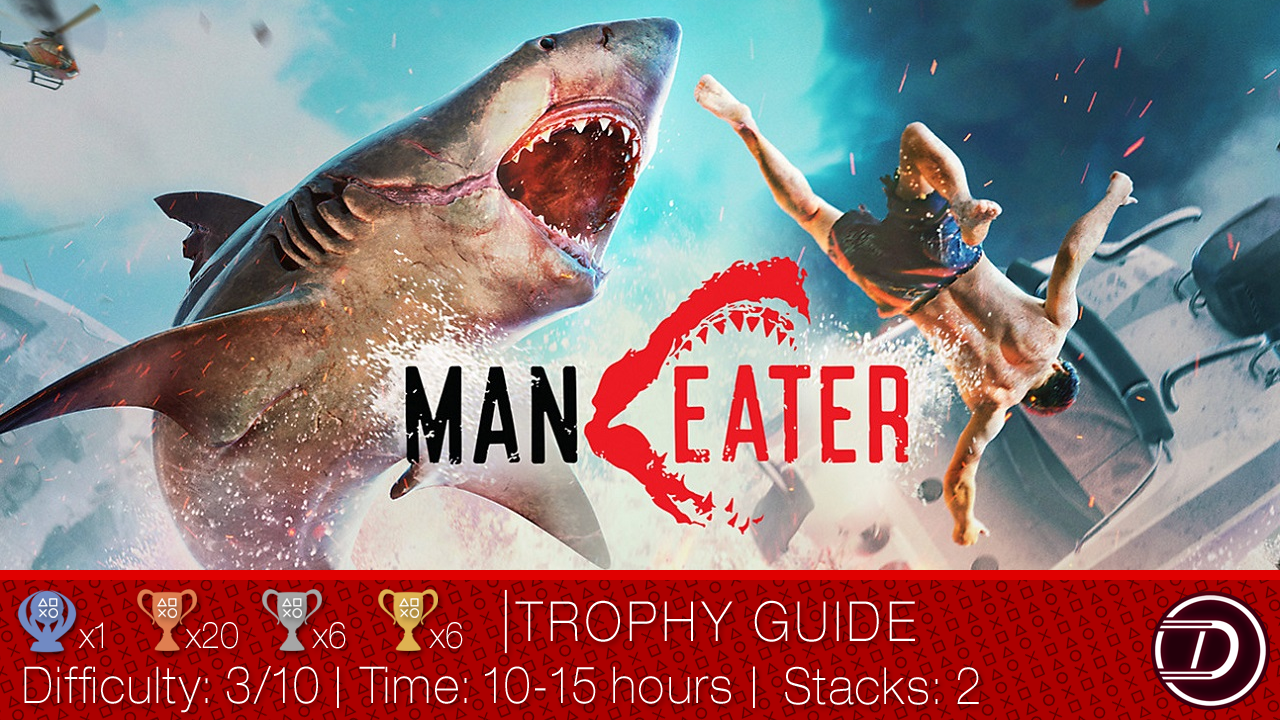 Welcome to the Maneater Trophy Guide!
Your mother has been killed, and you got tossed into the sea after being cut from her. Now you’re hellbent on revenge. Swim through many areas, eating fish, getting bigger, and hating humans!

Step 1: Finish the story!
The first step will be working through the story of the game. It is possible to get everything done before you finish the last story mission, so the trophy pops when you beat it. So you can do that if you’d like, but for this guide, we’ll split it into two things. One thing I recommend is using the Shadow Teeth once you unlock them! As they are fantastic. I used mostly Bio-Electric body parts myself, except for my teeth, and it worked wonders for me. After this step, you’ll have most of the trophies done!

This Is My Movie

I Thought You Were Tough

Step 2: Clear every area to 100%
Now it’s time to go back to every single area and get the collectibles. Each area related trophy has a nice little map to go along with it! When you’re at Mega Growth, you get to hit L2 for 3 extra mid air jumps. So don’t forget this. It makes getting some collectibles very easy! After this step, you’ll be down to only a couple more trophies!

Queen Of The Wasteland

Ruler Of The Deep

Queen Of The Ocean

Step 3: Infamy grind
In the odd chance you haven’t reached Infamy Rank 10 yet, now is the time to do the kind of boring grind. But luckily, after this, you’ll have a platinum! So slap on some music to make it a bit easier, and enjoy eating people and popping that shiny trophy!

Obtain all other trophies

After the tutorial, you get this trophy automatically!

This is for finishing the tutorial!

This comes automatically as you work your way through the story. You evolve at level 4 to a Teen.

Once you reach level 10 and get back to your grotto, you’ll age to an adult. This will also come naturally through the story.

After you complete the story in Sapphire Bay, and reach level 20, next time you’re in a grotto, you’ll age up to be an elder shark!

When you reach level 30, and you’re in the Prosperity Sands area, you’ll need to go back to your grotto to be able to age up to a Mega Shark!

You get your first evolution as part of the story to make your sonar better!

This trophy is for getting 50% of all available body mutations. This will come naturally as you get collectibles, and finish quests.

This is for getting all of the Mutations possible. This will come naturally as you clear all the side quests, the story, and get all the collectibles in the world! You also have to reach Infamy Rank 10 to get some mutations. Refer to

Infamy Level 10 on how to gain the ranks. 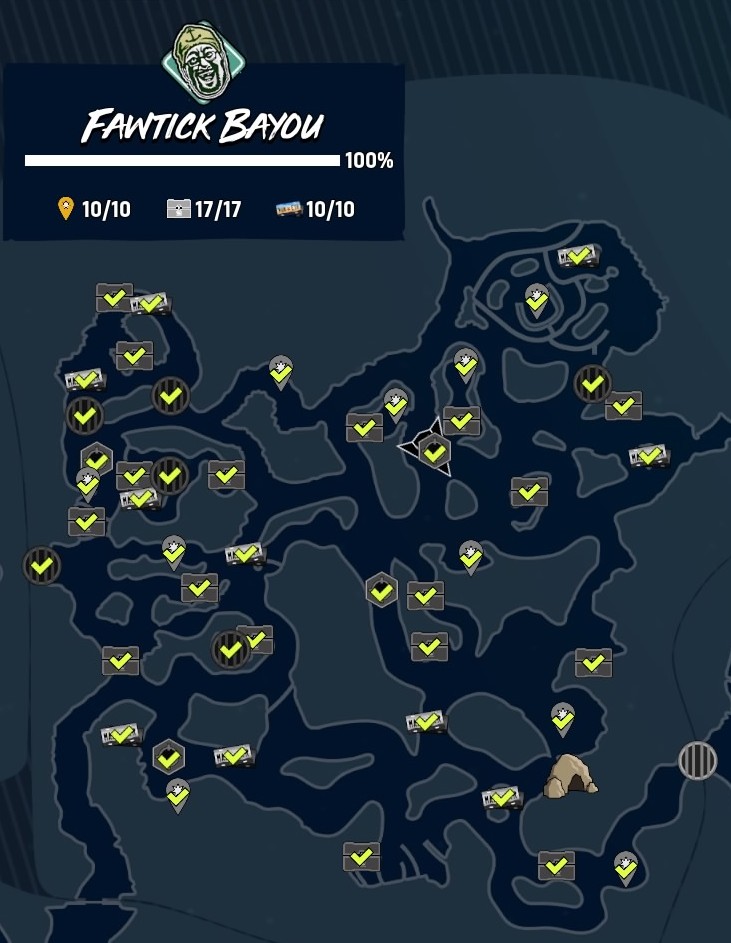 You get this trophy once you’ve completed all the activities, and collected all of the collectibles in the Dead Horse Lake area!
Below is a map that shows all the collectibles! 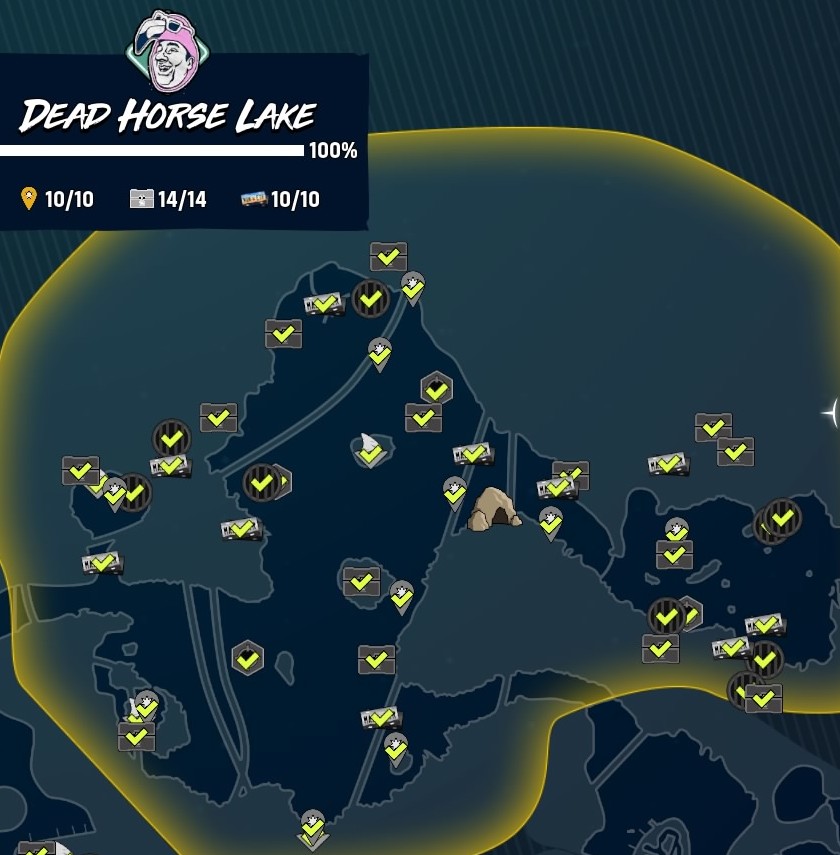 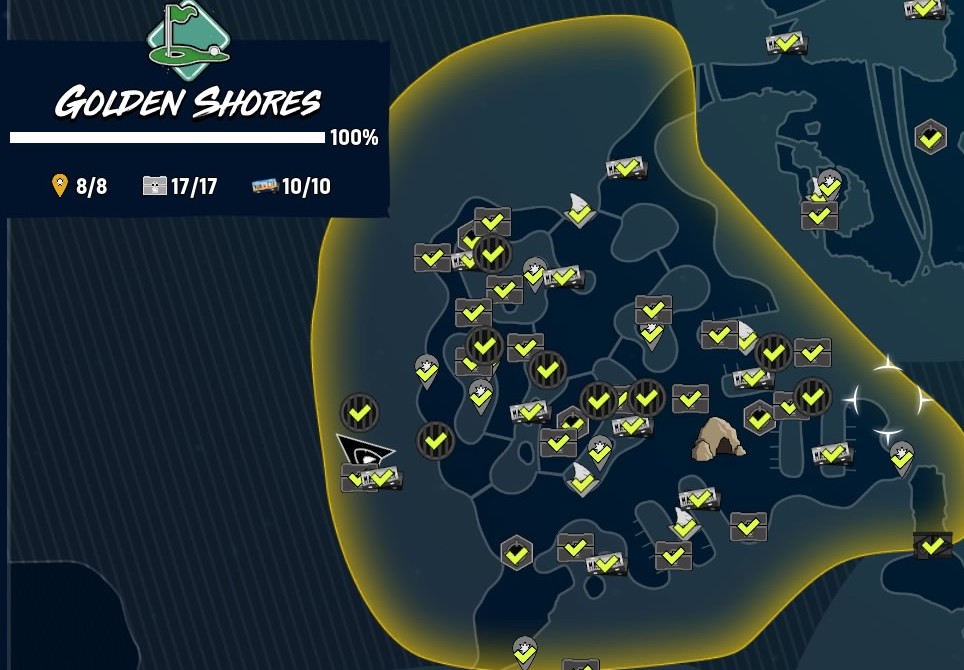 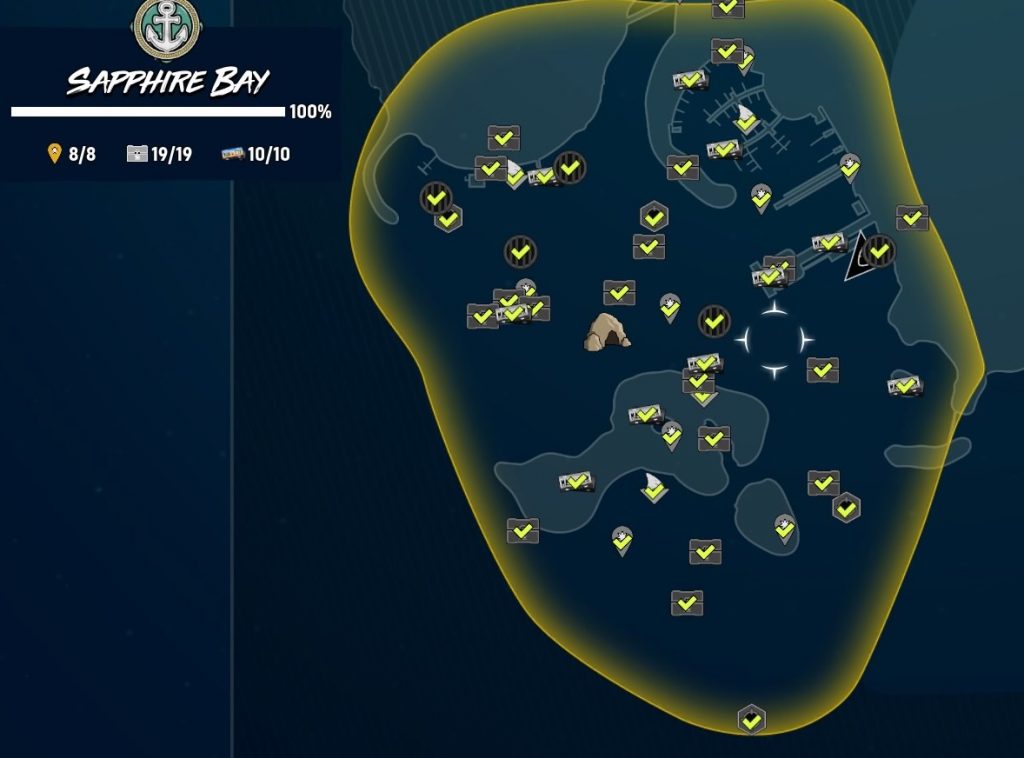 This trophy is for completing all the activities and getting all the Collectibles in the Prosperity Sands area! 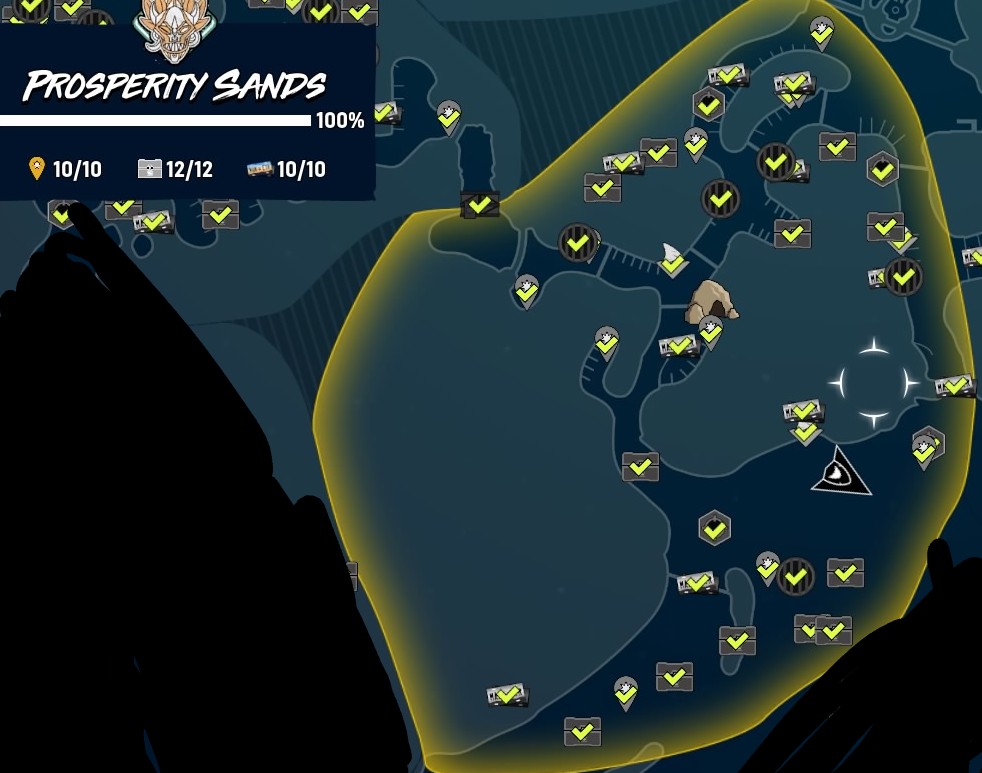 You get this trophy once you completed all the activities, and collected all of the collectibles in the Caviar Key area!
Below is a map that shows the location of all the collectibles! 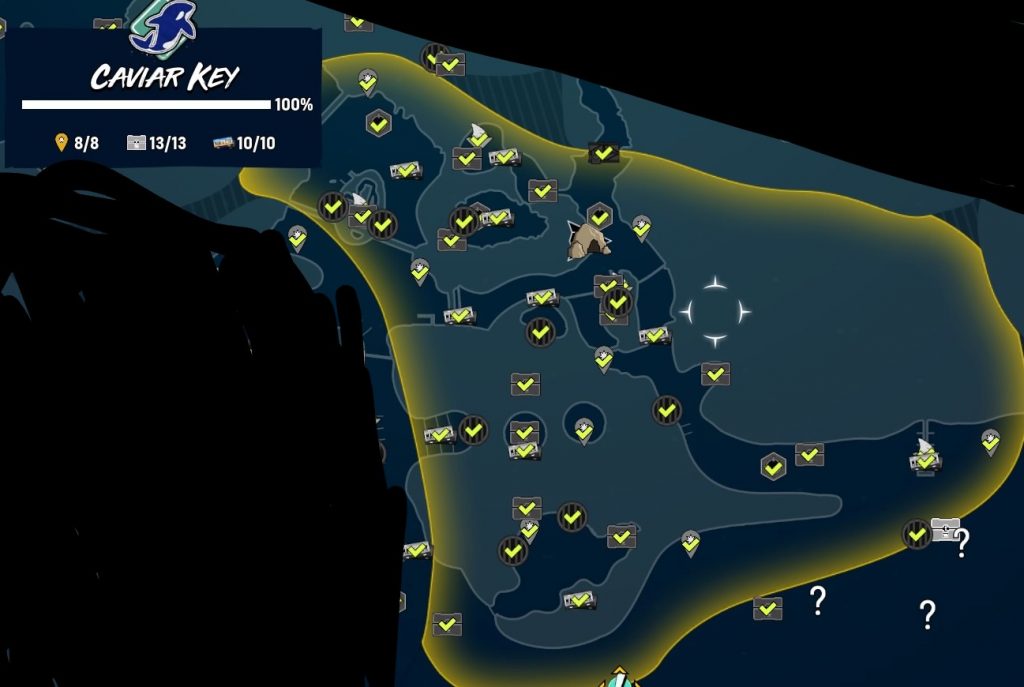 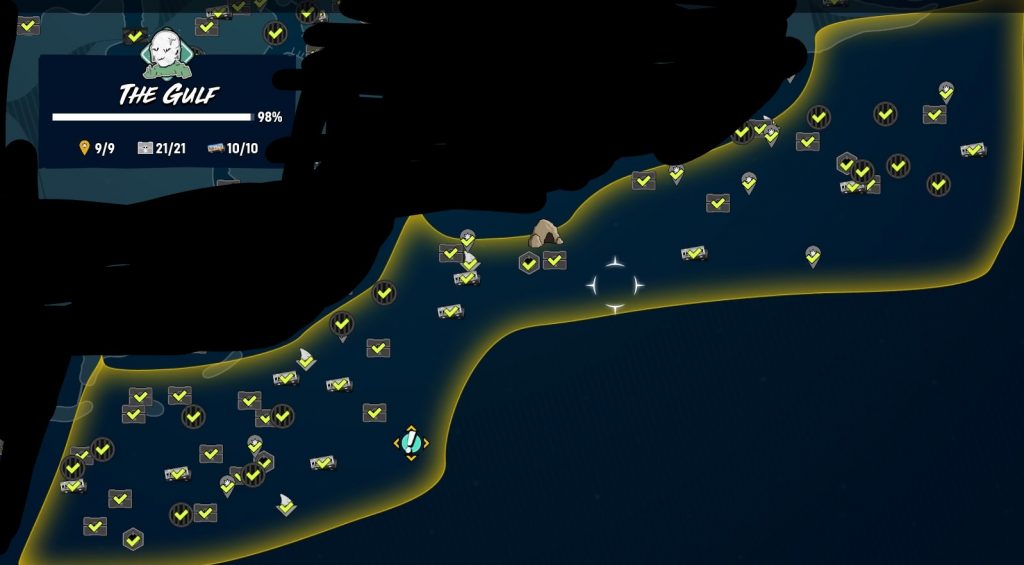 This trophy is yours after you finish all of the areas in the game to 100%.
Crawfish Bay doesn’t have a trophy tied to it, so below is a map that shows the collectibles in the area! 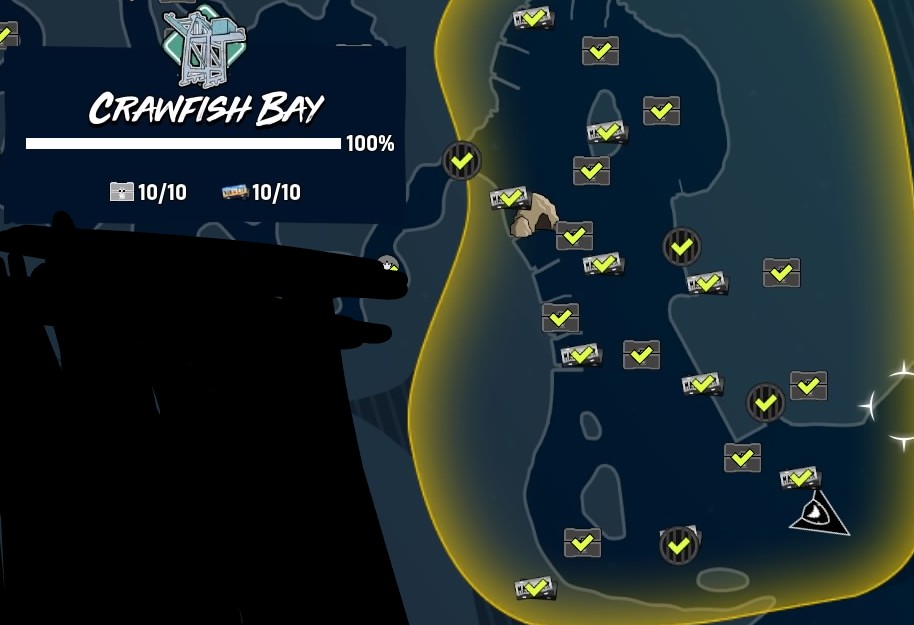 When you’re doing the story in the Golden Shores area, one of your objectives will be to kill the Apex Predator in the Fawtick Bayou. It’s a big alligator! To get it to appear, you have to clear every single quest in the Bayou.

This Gator is fought, the same way you used to fight gators. Swim away from it, then when it attacks, dodge out of the way. Try not to get too many attacks in at once, because depending on your level, its tail attack will hurt you! After you kill it, you get this trophy!

This trophy is for killing the Apex Predator in Dead Horse Lake which is a Barracuda.

This fight can be a pain because it moves so fast. But there’s plenty of fish to eat around it for food. If you can’t dodge it to hit it while it recovers, just attack it a few times then back off.

This is for killing the Apex Predator in Golden Shores, which is just a giant Maiko fish.

Chances are you’ve already killed a ton of these fish, and they’re super easy to take down. No real strategy needed.

In Sapphire Bay, when you finish the story quests there, the Apex Predator appears, and once you kill it, you get this trophy. The Apex is a giant Hammerhead Shark, and is tough to take down.

I recommend getting two or three attacks in then backing off, as it can catch you between its jaws and destroy your health.

The Apex Predator in the Prosperity Sands area is a Great White Shark. Now this shark is just like the Hammerhead Shark you fought earlier. I recommend waiting until you’re level 30 though, with some maxed out body parts!

You can go crazy on it up close and it shouldn’t have an issue killing you, or you can wait until you have a chance! Either way, when it’s dead, this trophy is yours.

This is for killing the Apex Predator in the Caviar Key area. This Apex is an Orca and it is tough.

You have to be on your toes for when to dodge, and only attack it when it’s flashing yellow after you dodge, because it will hit you hard otherwise. There’s only a few seals around for health as well, so this may take a few tries!

In The Gulf area, you’ll fight this Apex Predator for the story. It’s a giant Sperm Whale, but it’s slow and easy to beat.

You can get in about 3 attacks before you have to dodge, and then you can attack it like crazy again! Compared to the previous Apex, this is a cakewalk.

Once you defeat all the Apex Predators, this is yours. It will come naturally with the story.

At the end of the story quests in Sapphire Bay, you’ll battle Scaly Pete. Once you beat him, this trophy is yours!

This trophy is for beating the final mission in the game. When you fight Scaly Pete, he’ll shoot torpedoes at you. You have to dodge them, then bite them and hold

. Then get close to his boat and hold

until you have a reticule on the electricity rods on the bottom of the boat.

You get this trophy for finding all the Nutrient Caches in the game. This will come naturally as you clear out every area of the game.

This trophy is for collecting all of the license plates in the game. This will come naturally as you clear out every area!

In order to get this trophy, you have to find all of the landmark spots in the game! This will come naturally as you clear out every area. Also a thing to note, is that Crawfish Bay doesn’t have any Landmarks in it at all!

This trophy is for reaching Infamy Rank 1. Refer to

Infamy Level 10 on how to gain Infamy.

This is for reaching max rank in the Infamy Ranks. This trophy is a little grindy, as Infamy ranks don’t come naturally. To gain Infamy ranks, you have to kill humans or attack boats, until hunters come after you. You then have to destroy their boats!

Once you fill your infamy bar, you’ll have a special bounty hunter appear to try and kill you. Once you beat them, you then gain a new infamy level. The fights for Infamy Rank 9 & 10 are the toughest, as they have lightning rods on their boats. So you have to find a big fish, or human, and bite them and hold

, then go under the boat, and hold

to target the rod, then release

to throw it at the rod.

Once it’s destroyed, you can then kill the boats!