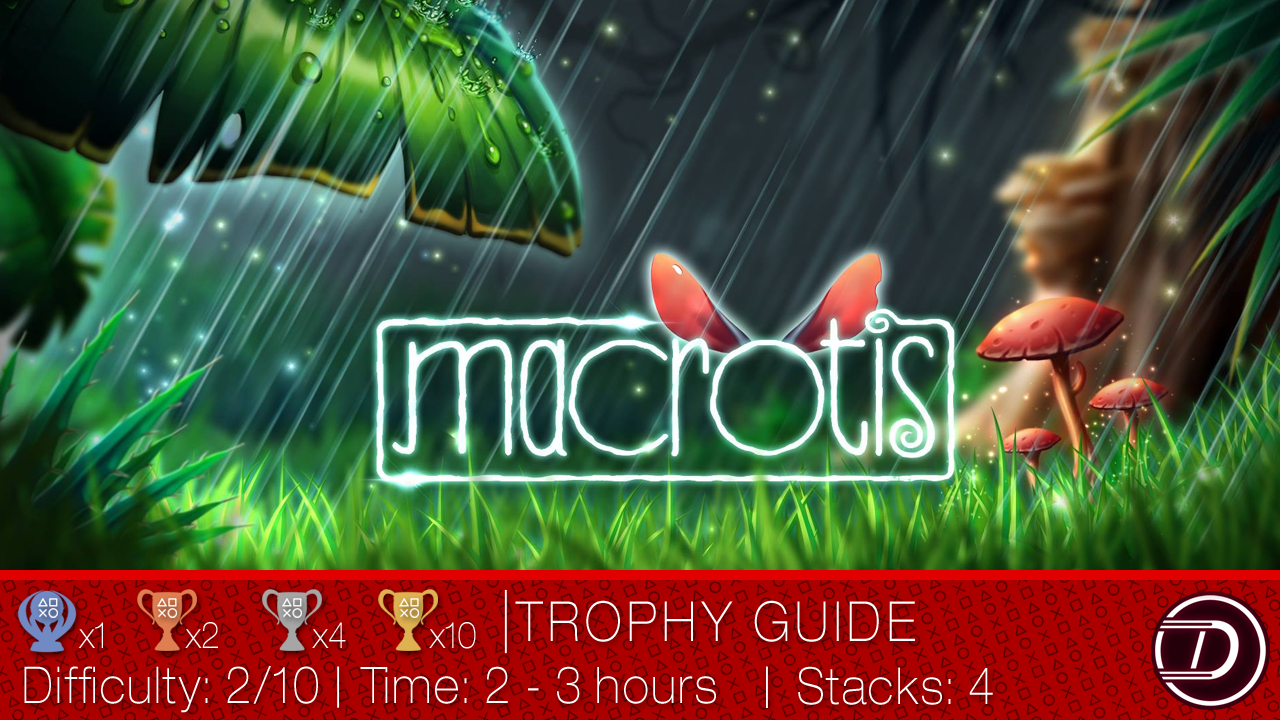 Welcome to the Macrotis: A Mother’s Journey Trophy Guide!

Step 1: Beat the game
This is all you have to do to get the platinum. It’s a relatively short game, but there is a bit of effort needed in some platforming jumps. Also, this is not a full walkthrough of the game! Just a walkthrough for the puzzles needed for the trophies!

You will get every trophy in this step, including the

This will unlock as you begin the game and get through the tutorial. You have to hold

to creep across some very weak platforms.

During Chapter 1, you’ll come across a Tortoise, that you have to push in the water. This begins a long section of platforming, while keeping up with the Tortoise in the water below you. A few general tips. Hold

to cling to walls, and only when you turn around on a wall, can you perform a wall jump. You don’t have to touch the left stick while wall jumping. Also, watch the ground. If the spot is cracked, you have to walk over it holding

. The most notable spot is in the first section, when you make it to the piece of land just above the water, part is cracked. If you run over it, you’ll fall and have to restart. Refer to the video below for this long area!

At the end of Chapter 1, you’ll be in a big open cave. There will be a little rock between two walls, a rock just above you, and a giant rock in the top left of the area. What you want to do is push the top right block to the left. When it falls down once, jump onto it, and jump up into the small hole to your left, and push the log over. Now push the rock to the left until it falls down all the way. Now push it right, and dig at the wall. Now push the medium size square, that you’ve been pushing this whole time, into the hole on the left. Now hop up under the giant rock and break the wall. Now run to the right and jump up on top of it, and chew the root holding it up. Move the small rock, all the way to the left, from in between the walls, and jump up the rocks and leave the area.
See below for a video reference.

This will unlock, as you start Chapter 2!

Shortly after starting Chapter 2, you’ll be introduced to your dual body form. Complete this puzzle, by just pushing the block off the ledge to the left, then pushing it to the right, and hop over the wall. Be careful though. If the block hits your body, you will die and have to restart the puzzle.

As you go through Chapter 2, you’ll experience some dialogue that unlocks this trophy!

In Chapter 2, you’ll come to a spot where you need to clear the way using round boulders. Position yourself between them, then hit

to meditate. Now, go up to the top right rock, and chew the root connected to it. When it falls, hit

to return to your body, and hold

and run to the right as fast as you can. When you clear this section, this trophy unlocks. Refer to the video below on how to do it if you’re stuck.

In chapter two, you’ll hit a second river. There will be a log in the water. Stand on it, and hit

to become a spirit. Push the log in the water the traverse the top path. The hard part of the path is the turtle at the end. You have to jump over the red object, and push it off to the right, so you don’t die. Then, wait until your full body is right below you, before you pass through a wall to a log. If you lose your spirit form at all in this area, you have to restart. Refer to the video below for a walkthrough of this puzzle.

This puzzle is at the end of Chapter 2 and has a great deal of steps. First, push the first block you see, to the left, so you can get up on the path. Then, hide in the little blocked off path on the right, and use your spirit form. Now, go around the top path and all the way to the right. Now pass through the wall, and go left. Then, pass through the next wall. Now push the rock down to the right twice, and let it rest against the wall to it’s left, after the second drop. Now exit spirit form, and enter it again. Now follow the same path, and after passing through the first wall, head right this time. Now dig at the wall to remove it, and push the log you see, to the left, so it covers the cracked pathway. Now return to normal form and go to the giant rock you’ve passed twice. Bite the root and fall down. Now jump up the rope to your left, and then push the rock to your left. Now use it to hop over the wall and push the next rock to the right, then left. Then hop up into the pathway and finish the chapter. Refer to the video below for a walkthrough.

This unlocks at the beginning of Chapter 3!

In Chapter 3, you’ll end up getting stuck in a trash compactor. You gain a new power here. When you use it, and jump out of the compactor, the trophy will unlock.

This puzzle is in the middle of Chapter 3. It’s an auto scrolling section where you have to be quick on your feet and move levers and in your spirit form. This is very hard to describe in words for the puzzle, so I highly recommend watching the video below. After you finish the rising water puzzle though, this trophy unlocks!

At the end of Chapter 3, you’ll be met with a puzzle where you have to change water levels of a pool. To start, pull the triangle lever, and the pull the raft to the left through the door. Jump onto the raft and hit

This is unlocked as you start Chapter 4!

This will unlock once you use your magical powers to push down a wall in Chapter 4, in the Mausoleum looking area.

When you finish the game, and the emotional journey, this trophy and the platinum will unlock.