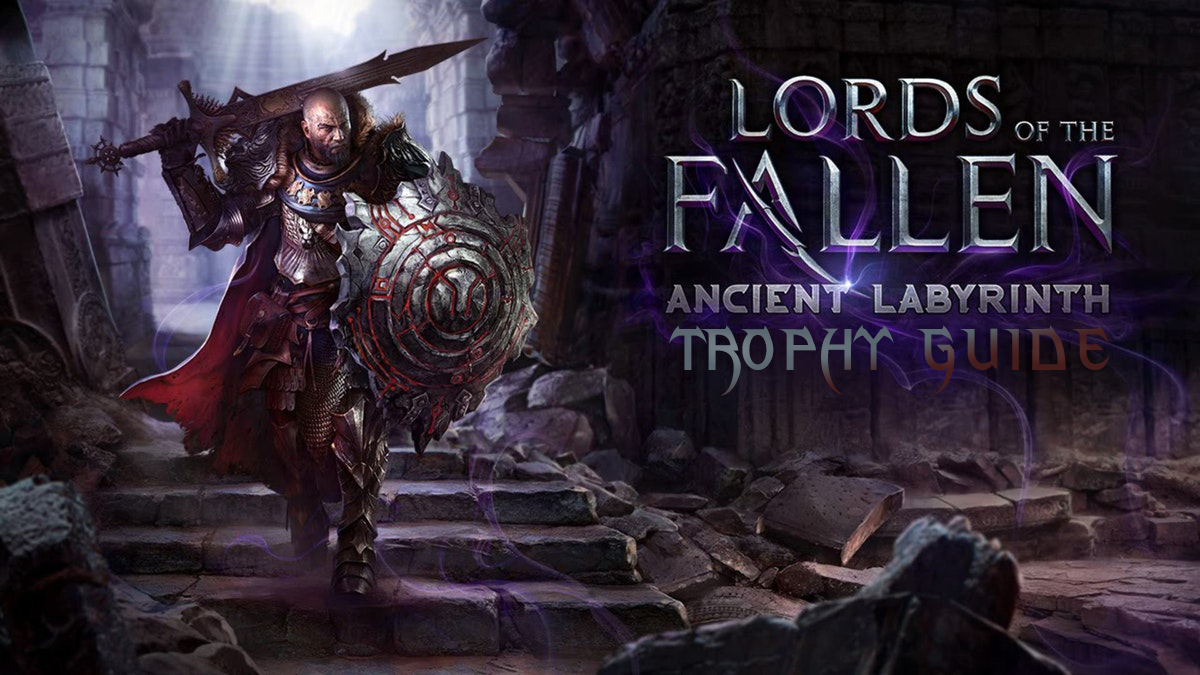 He knows what they did last era

Respect for the Dead

Welcome to Lords of the Fallen – Ancient Labyrinth DLC Trophy Guide! This DLC includes a new map and new weapons. A new aMAZEing adventure is going to test Harkyn’s nerves and his sense of direction.

First of all, you need to know how to go to inside the Ancient Labyrinth. You can only access it after you defeated the Beast main story boss. Once you have done it, go to the Blacksmith, speak to him, and he will teleport you to the entrance.

Then you can proceed on your way to the final boss while exploring all areas, killing all the enemies and collecting the eight Audio Notes of this DLC. Make sure to rotate all labyrinth walls more than one time because there is more than one area you can access.

When you have killed the final DLC boss, you have to do three more trophies before leaving the DLC zone, then complete the main game and kill the last boss with the new weapon you have acquired in this new map.

Step 1: DLC-Related Trophies & Collectibles
Proceed on your way to the final boss while exploring all areas and collecting the eight Audio Notes (refer to the

He knows what they did last era trophy for more details). Make sure to rotate all labyrinth walls more than one time because there is more than one area you can access and kill all the enemies you encounter during the exploration to progress with the

He knows what they did last era

Don’t burn yourself out

Step 2: Trophy cleanup after the DLC boss
Once you’ve defeated the DLC boss, there will be three more trophies you should have to do before leaving the Ancient Labyrinth area:

Respect for the dead

Step 3: Kill the last Main Boss with a DLC weapon
When you defeat the DLC boss, he will drop a weapon based on his magic school (Refer to the

Psychological warfare trophy for more details). You have to kill the last main game boss with this weapon in order to unlock this last trophy.

Here there is a video which shows a complete 100% walkthrough with all the collectables:

Credit and big thanks to 只是笨鳥 for the video.

There are eight new Audio notes around the new area of the Ancient Labyrinth. It’s hard to miss them because they are not really well hidden, but here a table with all their locations and timestamps of the 100% walkthrough video located in the roadmap section of this guide.

The shield is located at the beginning of the DLC, near the first checkpoint. When you first interact with it, you can’t pick it up but you will only read an inscription on it.
After you have defeated the DLC boss and killed all the enemies inside the labyrinth, return back to where the shield stand. It will be surrounded by three Phantom Skeletons enemies, defeat them and then pick up the shield. The trophy will unlock right after.

Note: This shield has a maze on it but it’s not the actual map of the Ancient Labyrinth area.

In order to get this trophy, you need to find the Strange key (from 1:19:00) and then you can reach the locked door in the first ring. Use it and you will find a lever inside with a rune and elemental symbols (Lightning, fire, ice) around. Pull the lever once and the trophy will be yours.

The image shows the elemental symbols of the rune at its beginning order. 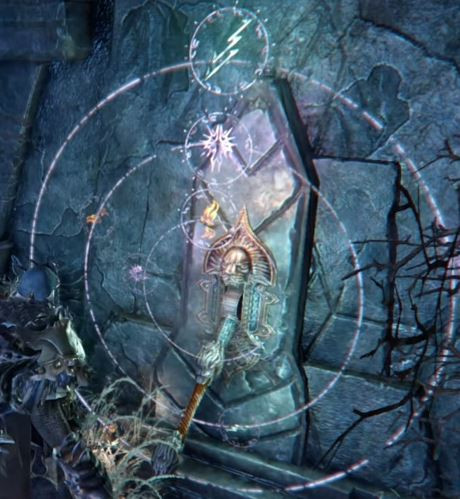 You can achieve one of these three weapons based on the magic school you choose:

Note: You can obtain this trophy (But not

Played with Fire) after the boss fight too, simply find the key and pull the lever. The mechanism will not change but the trophy will pop.

Resting places are found behind locked doors in the maze. There are four of them and each one will reward you with a piece of the Consecrated Armour set.

Below there is a table with their locations and their timestamps of the 100% walkthrough video located in the roadmap section of this guide.

Below is a video that shows how to open the second door before beating the DLC boss.

Credit to GrandNoble for the video.

This is the only boss you will encounter in this DLC. He’s located in the middle of the maze and he’s quite easy to beat after you learn his moves. You can’t attack him directly during his first four phases but you are going to attack the book-shield that surrounds him (The yellow bar indicates the “life” of the shield).

This is the timestamp in refer of the video guide located in the roadmap section showing how to face him: 40:45.

After you have defeated the DLC’s final boss, talk to the NPC right before the entrance of the maze one last time. He will drop an item called Fading Fragments. After picking up it, go to the Blacksmith at the beginning of the DLC.

Talk to him and select the option “I found this in the other world. Any idea how to use it?” and he will craft you one of the three armour sets:

The trophy will pop right after your choice.

All enemies inside all the Ancient Labyrinth are counted as ghosts. Simply kill forty of them to unlock the trophy.

Note: If you did not unlock this trophy by the end of the DLC, simply save the game, die or quit to the main menu, and reload your current save. All the enemies will respawn.

This will be the first trophy of this DLC set you will earn. Right before the entrance of the maze on the left, there will be an NPC (Mysterious Stranger). Before reaching him, a cutscene starts and you will earn the trophy.

This should be the last trophy you will earn for this DLC set. You need to kill the last main story boss with a DLC weapon.

Played with fire trophy. If you don’t want it, you can act in two ways:

For this trophy, you will need to change the magic school of the final DLC boss to the fire type (refer to

Psychological warfare for more details on how to change it). The trophy will unlock right after the boss fight with the

Don’t burn yourself out one.

Played with fire trophy too. The image shows the exact elemental symbol you need to take on the upper circle. 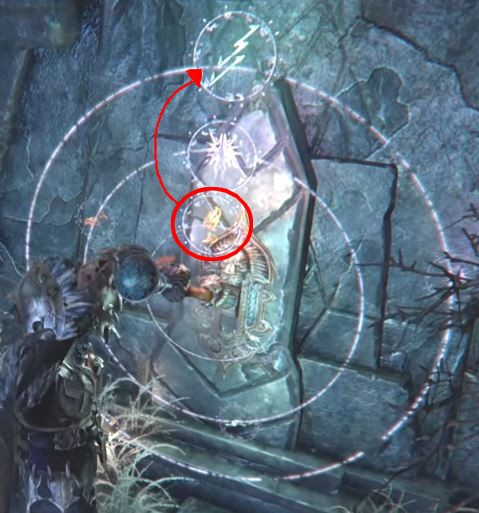