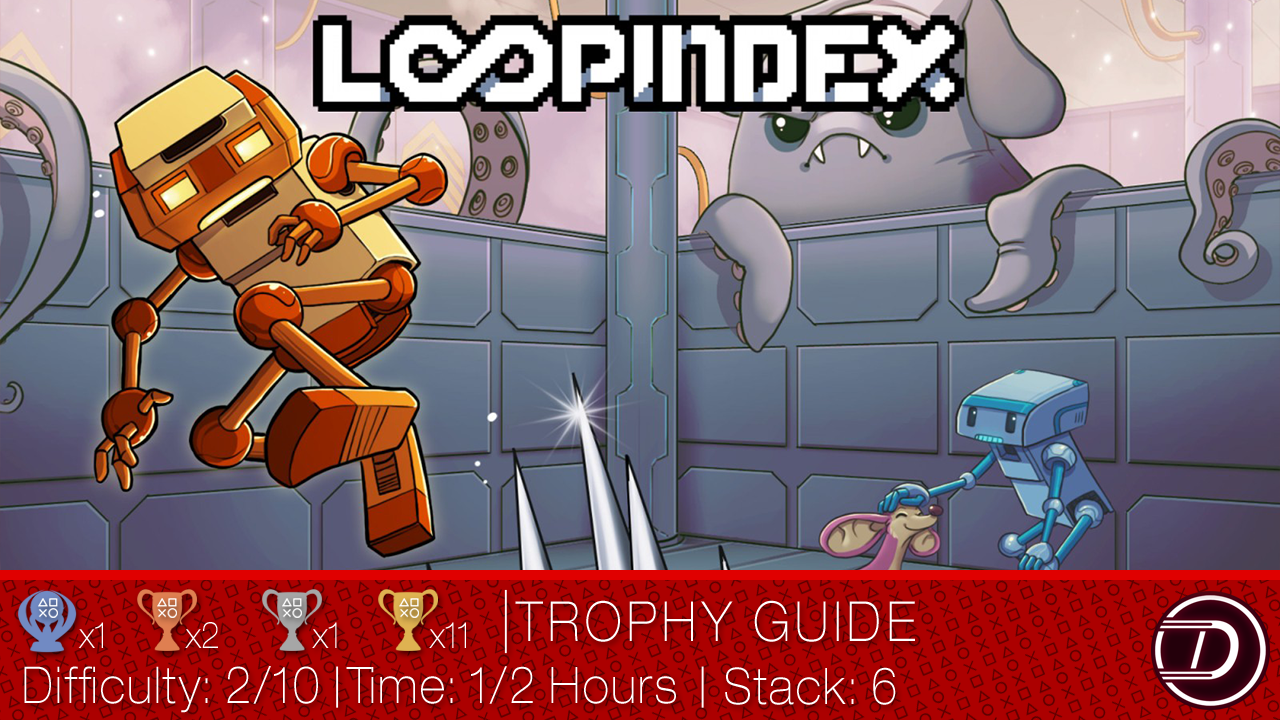 Welcome to the Loopindex Trophy Guide!
Welcome to Loopindex. A puzzle game that isn’t too tough, and has an easy platinum!

All this game needs you to do is complete the first 49 levels. Some levels are super simple and others take a bit of thinking. This guide only has the solutions for the trophy related levels! Or else it would take forever. After this step, you’ll have the platinum!

Easier Than It Looks

Get all other trophies

This trophy is for beating level 3. This is a little confusing. You have to set one robot on the first button, then select the top arrow to let your other robot run into automatically. Once it’s through the first red zone, step off the button. Get the robot on the right side of the screen to stand on the second button, and have the left robot go into the middle arrow. When it gets past the first red zone, step off the button with the other robot, then put them both on the elevator.

In level 10, you need to push frogs. This is very easy to do. Push the frog to your right, then push the next, and then take the robots to the elevator!

On level 16, you’re met with a ton of boxes. Push the top left box, and top right box off their respective buttons, and then go to the elevator!

In Level 21, you’ll be introduced to bombs. They work like boxes, except once you start pushing them, the fuse starts before they blow up. So put a robot on the button at the top of the screen, and push a bomb towards the blocks, and have them blow up, then go to the elevator and win!

In Level 23, you are met with turrets. To be able to beat this level, you have to get a robot through the first red zone, and dodge bullets. Put it on the first button. Then use the spare robot to push a box to the top left button. Push the last box to the bottom right button, then put both robots on the elevator!

In Level 27, you get a chance to control a crane. Use the crane to pick up the left box and put it on the button. Then use the two robots to push the big heavy box down to the button. This causes all the doors to be open. Then take the robots to the elevator!

In Level 33, you get introduced to treadmills. Take a robot and put him on the treadmill and keep him running. Cross the path with the other robot, and have it run on the bottom treadmill. Use the new platform to cross over. Now push the frog so it goes right, then go onto the elevator.

Once you reach Level 42 you get introduced to blue arrows. These are controlled by stepping on a crane control pad. Make the blue arrow go left, and have the robot on the right go to the middle arrow. When it passes it, make the blue arrows go down. When the robot on the right is walking down into the wall, make the arrows go left, then quickly run to the button to lower the spikes. Then it’s onto the elevator.

On Level 47, you have to get through a “tease” of the boss. This level is annoying. So here we go. First wait for a bomb to appear, then break the block with it. Then turn off the switch. When the squid slams the buttons, use a robot to go to the middle. Then get the other robot to the right side, but be cautious about the middle robot, as it can die from the boss. Now take the middle robot to the left side, push a bomb to the teleporter, then get the right robot to push the bomb to the brick, blow it up, then hit the switch. Then get the robots to the elevator

On level 48, you meet the boss. Unfortunately there is no discernible pattern for this fight. You have to be watching everything, as the boss will slap you dead. The boss always starts in the middle. So wait for a door to lower to the center, and then push the bottom button. Then the boss will move left or right. Keep a robot on each side, and wait for a bomb, while avoiding tentacles. Blow up the bricks, and hit the button on the same side as the boss to hit him. Hit him 3 times and he dies.

In Level 49, you meet mice. They run away from you. Chase a mouse onto the right side button. Put the left side robot on the button, creating a bridge, then chase the other mouse over the bridge, then onto the button. After that, go to the elevator!