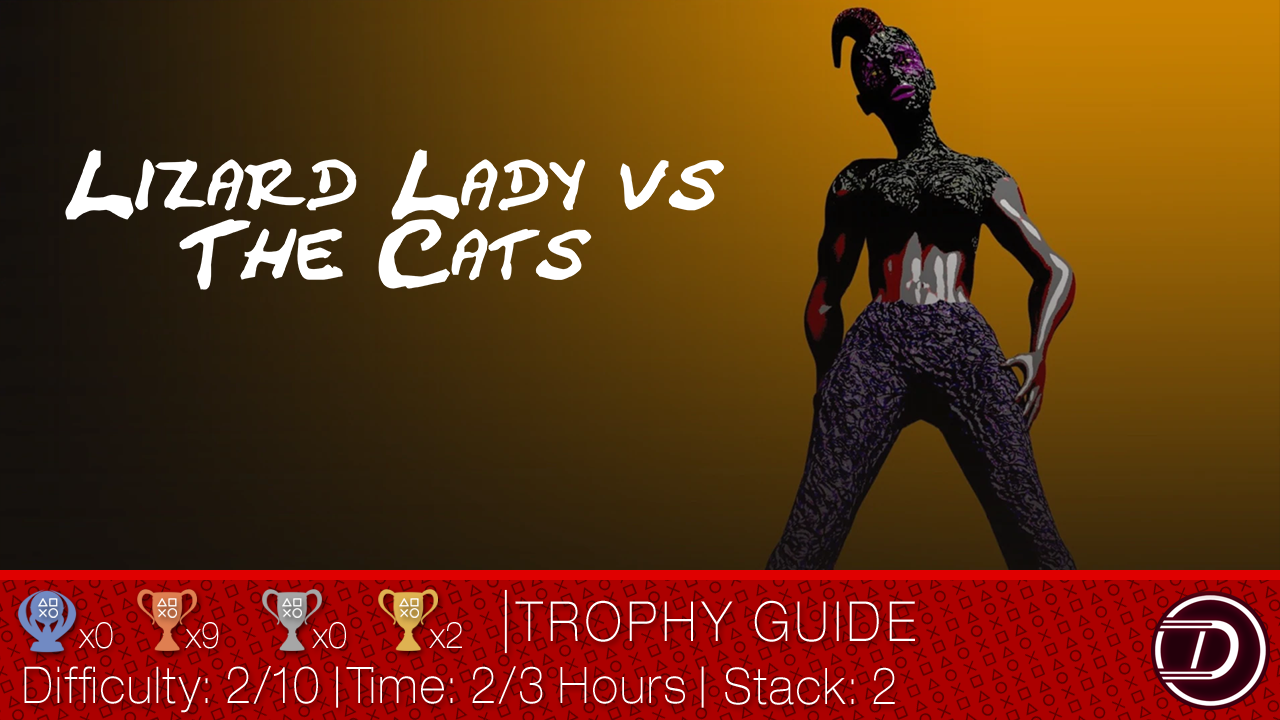 Welcome to the Lizard lady Vs the Cats Trophy Guide!
Wracked with guilt after succumbing to her genocidal side in Lizard Lady vs the Cats, Lizard Lady finds herself trapped within her own psyche battling manifestations of her conscience in a never-ending fight for survival.

Step 1: Finish the game.
This step is optional but it’s recommended as you will acquire some knowledge of the 5 levels of the game.
A complete playthrough should take around 5/10 minutes so take your time and try to memorize where to go and where enemies are.

Unfortunately, this step might not give you any trophies except if you complete a level without taking any damage or upon death.

It might sound hard but the game is quite easy and the levels are very short. Take your time, dodge, and bail the enemies to avoid being swarmed.
In the

Invincible trophy description, you can also find a complete breakdown of each level to help you.

Step 3: Nightmare arenas.
After completing the main game without dying, it’s time for the nightmare arenas. These places are like survival arenas where you have to kill as many enemies as you can.
To find the arenas, from the main menu select the “Lizard Lady vs Herself” option.

Reach 100 kills on every arena then focus on getting 1.000 kills to get the last trophy remaining.

Unluckily, you will have to score 1.000 kills in a single run as the trophy description for the

Nightmare Score is wrong. The best arena is the first one where to go for it but be free to try it on the arena where you are more comfortable.

This trophy can be a little bit hard as you need to finish all 5 levels of the game in a single run without taking damage.
It might require some practice to be able to accomplish, but after 2/3 runs, you shouldn’t have any trouble.

Take your time, dodge bullets by jumping or rolling, and bail the enemies to avoid being swarmed. Also, try to remember where the enemies are.
Each run can be finished in 5/10 minutes so don’t worry about the length of the game as well.

There are 3 types of enemies:

The game is composed of 5 levels in total. Be free to check this video guide to have a visual breakdown of every single area and good strategies on how to kill every enemy (Timestamps in the description):

To get this trophy you need to get killed once. Easy as it sounds especially while doing nightmare arenas as you are obliged to die to end a run.

This arena is the easiest one. The best strategy to get a total of 100 kills is described in the

Nightmare Score trophy check it out so for further details.
Also,

This arena has no borders and it’s composed of more “floors”. Because of that, you can easily fall and quadrupeds enemies can even push you to death when they run towards you.

The best strategy is to turn 180° from the spawning area and go up; then turn back and head to the other platforms.
Enemies will start to spawn back and in front of you so you can shoot them from the beginning area. Pay attention to the quadrupeds and turn once every 5/6 seconds to kill them before they reach you and push you outside of the arena.

This arena is red, totally RED and you will only see bullets incoming from nowhere. It’s the worst nightmare arena and you will spend some time moving around to search for enemies.
Most of the time, you will get hit from behind so keep dodging around and kill every enemy you find when you find them.

Invincible one.
The description is misleading as well because you don’t have to reach a cumulative total of 1.000 points, but you need to reach that score in one sitting.

The first nightmare arena is the easiest where to go for this trophy.
The best but slower strategy is to run at the end of the map and stay on the left corner of that area. Enemies will only come from in front of you and you can easily kill them all one by one without any problem.
Make sure to not move too far away from the corner as if you do, enemies can spawn at your back as well.

A faster but less safe strategy is to reach the end of the first path in front of you then heading back to the starting area. Watch out for the enemies inside the spawning area at the beginning and then they will start spawning in front of you. From now on you just have to shoot and wait while taking cover behind the wall from time to time until you kill 1.000 enemies in total.
Be sure to quickly kill the quadruped enemies as they are annoying if they get close to you.

NOTE: This trophy might not pop right after completing the 1.000 kill run. Don’t panic, make another run, do a couple of kills and die. This should net you the trophy.