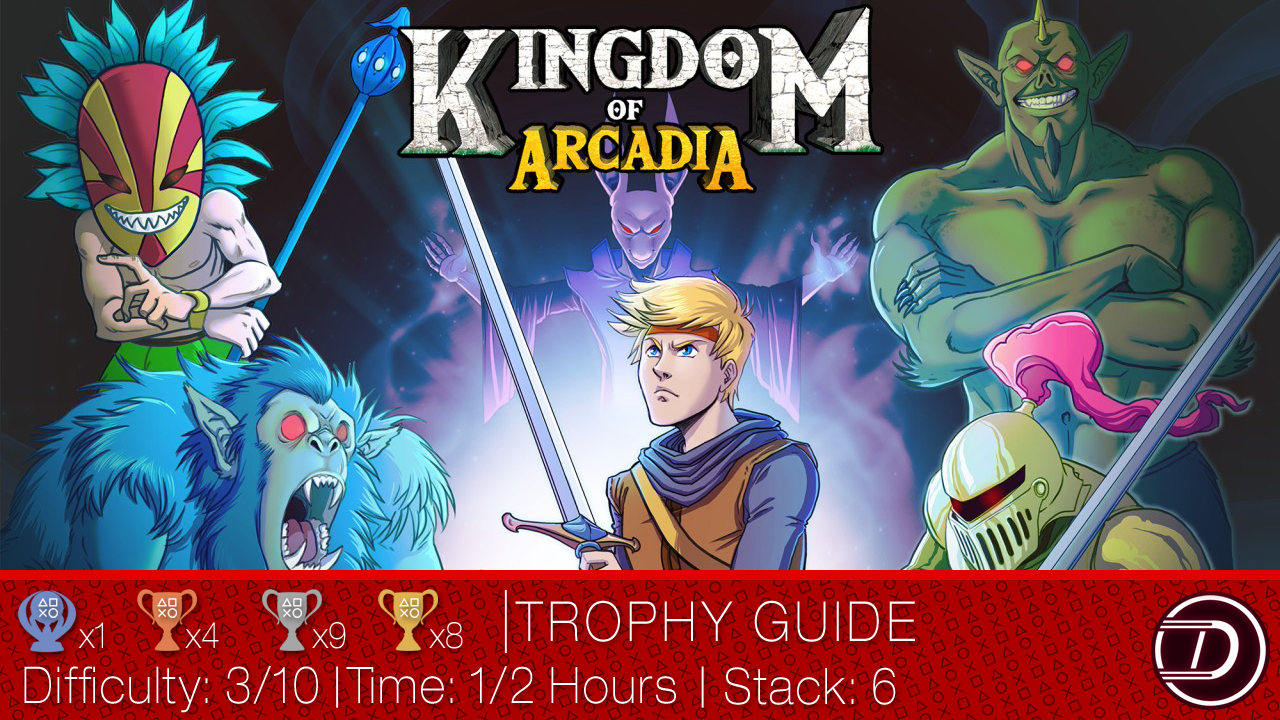 Welcome to the Kingdom Of Arcadia Trophy Guide!
One day, you play an arcade game, hoping to have fun, next thing you know, you’re being sucked inside and are tasked with saving the land in this fun 2D platformer!

Step 2: Grind Money (Optional)
In this step, that you can completely skip if you’d like, I recommend grinding a bit of money for upgrades. I went into the second boss with level 2 armour, level 2 sword, and level 1 knives, and I still felt underpowered. So I recommend upgrading at least your armour a few times, or your sword so he falls faster. Completely up to you.

Step 3: Beat the second boss!
This was the hardest part of the platinum honestly. The second boss really ramps up, but once you beat him, the platinum is all yours! Refer to “Magic Scepter 2” for the relative info on the boss!

This is for killing your very first enemy of the game! When you see them, you have to hit

for a melee attack, or

to throw your ranged weapons!

Secret areas are all over the place in levels, and they are indicated by cracked walls. When you see one, you have to smack it until it breaks, then enter it, and you get this trophy!

The Elements are the collectibles that are hidden in a chest in every single level. You get this trophy once you get the first one. Refer to “Secret Element 2” for more info on the locations of the elements in the first 10 levels of the game.

Throughout the game, you’ll have to open up coloured walls by finding the switch that corresponds to the colour that they are. Once you open the first one, which is unmissable, this trophy is yours.

You get this trophy once you beat Level 1-1!

When you beat Level 1-2, this trophy is yours!

After you beat Level 1-3, you get this trophy.

Once you beat Level 1-4, this trophy unlocks for you.

Beating level 1-5 will unlock this trophy for you.

When you beat Level 2-1, this trophy is all yours.

To get this trophy, you have to beat Level 2-2.

In order for this trophy to unlock, you need to beat Level 2-3.

This trophy requires you to beat Level 2-4 to unlock it.

After you beat Level 2-5, this trophy unlocks for you.

To be able to get this trophy, you have to buy the first armour upgrade for 500 coins!

This trophy requires you to buy the first sword upgrade for 400 coins.

In order to get this trophy, you must buy the first upgrade for knives, which costs 300 coins!

For this trophy, you have to find 5 collectibles. There is one per level, located behind a secret wall! Refer to “Secret Element 2” for information on where they are located!

This trophy is for collecting 10 collectibles. There is one collectible per level, and it’s always hidden behind a secret wall, so be sure to explore! You’ll know you got a collectible in a level, because in the level select hall, the eyeball element is floating above the gate! Below is where you can find every collectible in each level.

This trophy is acquired once you beat the first boss, which is the Golden Knight. He is relatively easy!

When he swings his sword back, he’ll send a shockwave out that you have to jump over. If he jumps in the air, he’s about to throw out some daggers that you must dodge, so run away so you get the needed space between them to dodge.

When he’s about halfway dead, he gets angry and starts jumping about. When he lands from a jump, he’ll have little dust squares next to him. THESE HURT YOU IF YOU TOUCH THEM! After the dust squares are gone, attack him before he jumps again! Rinse and repeat until he falls!

This trophy is for beating the second boss of the game. Now this is where it’s really annoying, and I recommend upgrading your items quite a few times. He has 3 attacks that he will use. The first attack is when he lifts his fists into the air, he will slam them down, causing ice spikes to come out of the ground, in an iceberg shape, you have to jump back then go forward mid jump to land between them.

The second attack is that he will jump around the arena in a ball, and when he lands, dust comes out from him, that will hurt you if you touch it! Sort of like the Golden Knight.

The third and worst attack is that he summons a giant snowflake that releases little snowflakes, that you have to get lucky to jump between without receiving damage! There’s no pattern to when you can jump between the little flakes, so you just have to hope for the best. He will alternate attacks though as the fight goes on. So if he just made icebergs, he will then make snowflakes, and if he just made snowflakes, he’ll then make icebergs. No two attacks are repeated. BUT he will always jump around between the two other attacks. So be careful! Also, when he’s making the snowflake, if you’re standing too close to him when it’s done, you will get hurt, as he kicks out his feet. So damage him a bit, then back off! Once he’s dead, the worst is over!