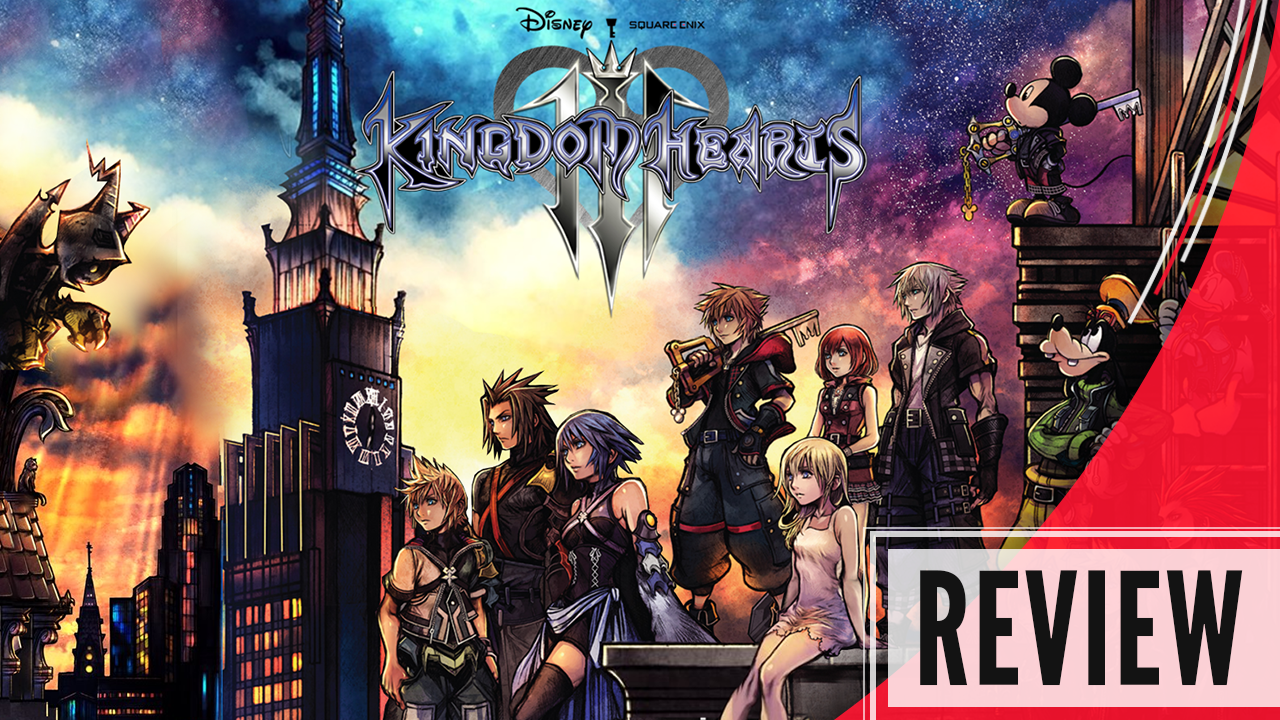 Kingdom Hearts 3 was developed and published by Square Enix, and was released for consoles on January 25th, 2019.

If you’ve never played a Kingdom Hearts game before, then I must say, you are missing out on a great, albeit confusing story. The game picks up right after Kingdom Hearts Dream Drop Distance, and you see Sora traveling to new worlds to help him regain his powers that he lost, and find the “Power Of Waking”. Except there are a whole lot more storylines going on than just that, and if you haven’t played any of the series, don’t start here!

Personally, I loved the story in this one. Though it may seem very complicated at some parts, and shallow at others, I enjoyed how it all got wrapped up personally. Though I know a lot of people didn’t. You get to see more in depth development of the characters that were once known as the bad guys, turn into actual likeable characters. Maybe it’s because they found their hearts though. The best part was seeing fan favourite character Axel grow, and learn more about his life. Or how he views his relationship with Roxas and Xion.

Each world also has their own story to play through. Though half of them just follow the storyline of the movies that they’re taken from, with Sora shoehorned in, this is how it’s kind of always been. Though I thought by this point, they’d have made new stories. Like Monsters Inc made its own story, that took place after the events of the main movie. Then you have Frozen, which follows the story of the first movie. Don’t get me wrong, I still enjoyed it, because I love all the movies these are from, but I wish I had seen new stories. It also didn’t help that there were almost no regular voices. So Tim Allen and Tom Hanks weren’t Buzz and Woody, so it took me from the experience a touch.

If you’ve never played a Kingdom Hearts game before. Let me set the tone for the gameplay. Mash X to win. Okay maybe it’s not that simple, but most of the time, you are mashing X, as that’s the primary button to do an attack. Then you have your spells that you can use by either going into a spell menu, or by using the shortcut menu. Though a lot of these spells felt extremely underpowered compared to melee attacks. The only real spell I used for most of the game was the Fire spell, and then when I was just about out of Mana, I would use my heal spell, which would then set my magic bar into a cool down.

Now if you use a spell, or a basic attack more than enough times, you build up what is essentially a combo meter. This lets you either super a super version of that spell, or “form change” your weapon. So that gives you another powerful weapon, with different attacks and combos for a short amount of time. This was fun to play with, as every weapon had a different form change, but eventually I just found my favourite weapon, and never changed from it. Just like I never experimented with all of the spells, because it just didn’t feel worth it. But there are some fun minigames that you get to do in battle once in a while. You’ll hit an enemy, that will give you an item basically. This will range from, swinging on a pirate ship, to zooming around in a car with a blaster, or bouncing around on a splash mountain boat, making a track of water that you go back down, causing damage to anything you hit. These were super fun to use early on in the game. But by the end game, again they felt useless. They usually did paltry amounts of damage to enemies that had 4 health bars, so I even stopped using them.

Over the course of the world’s that you visit, some of them have little minigames that you can partake in. Frozen has snowboarding down a mountain, Toy Story has an “arcade game”, and Pirates Of The Carribean was essentially Assassin’s Creed 4. You got your ship, and a whole sea to just explore. Each of these minigames had me excited, and bopping my head, and smiling as I was doing them all. Then there’s the Winnie The Pooh world. Known for its minigames, and hated by the community of the series. I personally love these worlds. There’s a fun variety of minigames, and it’s a nice way to relax after killing everything in your wake. Except for here. There were 3 minigames in the world, and it was just a “Match 3” minigame. Except you didn’t match 3, instead you matched 5. So I was left deflated and disappointed by the time I finished this super quick world.

There was also a slight gripe I had with the game. The fact that in each world, you don’t get a waypoint on the map, to know where to go. Now I know this is small, and to some they don’t like waypoints. But at one point, I was looking around an area for an hour, before I stumbled into the area I needed to be! Which I never would’ve guessed, because the area wasn’t exactly named!

This game looks absolutely stunning. As it runs on the Unreal 4 Engine. The game is beautifully polished and even the tiniest little details are made. Like in the Toy Story world, you end up in a video game store. You can look at the shelf of games, and you actually see a game cover, instead of a smudge. Sure it’s mostly just Space Cats, but it was a nice touch that something was created just for that! Then the water effects in Pirates Of The Carribean world for example are beautiful! You even leave your footprints in the sand! Then the music is just looped audio of the world’s that you’re in. So Toy Story was just a loop of “You Got A Friend In Me”. It was fun to hear at first, but after hour 3, it kind of got annoying honestly. So be prepared for the same tunes if you play this game.

Kingdom Hearts is one of those games where you make your own replay value. Whether it’s to just replay to see the story, or to get the secret ending! There’s also some challenges that the community loves to do. Like a level 1 run on the hardest difficulty! It may not be for me, but it definitely adds value to the game if you want it too. There is also New Game+, so you can go through it again, while you’re all leveled up! But other than that, the side content is just grinding and minigames. So if you aren’t interested past the main story, there’s nothing to keep you here.

Kingdom Hearts was a fantastic journey to what felt like the end of an arc in the Kingdom Hearts universe. It easily became my favorite in the series, even with the gripes I had. Though it sucks that you can’t just jump right into this game without playing the others, I recommend playing everything leading up to this point. I will remember this journey for a long time, and I can’t wait for more adventures in this universe.