The past year the whole trophy system seems to have been broken, what is the cause and what does the top think about this? 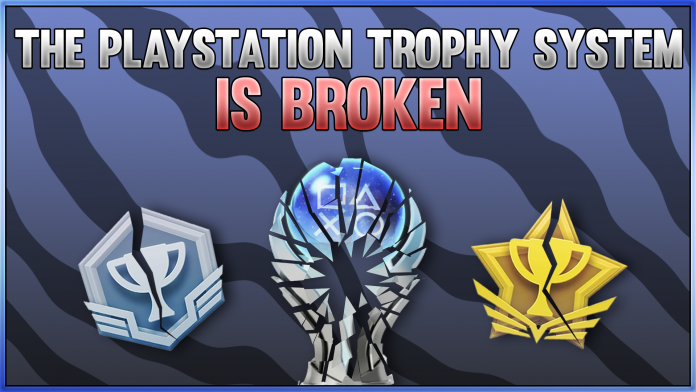 Playstation’s Trophy System has been around since 2008 and has been a prominent selling point for a lot of games, for better or worse. But since the past 2 years, the trophy system has started to crumble due to the number of games with easy platinum trophies. This begs the question Is The PlayStation Trophy System Broken?

Let’s start off by saying, not all developers that publish games with easy platinum are necessarily bad, there are some great developers like Ratalaika Games, Sometimes You, and EastAsiaSoft that publish full games with easy platinum that do have an actual games behind them, and most of them are pretty fun to play. One of my favorite small indie games I played the past few years is actually Bouncy bullets published by Ratalaika Games.

As of last year, the problem that wasn’t really a major one suddenly became massive when new publishers took it 1 step further from the ones mentioned before and just started releasing 1 or multiple titles per week. While this doesn’t seem like that big of a problem, since Ratalaika had a massive spree of releasing a game a week, these new developers didn’t take the same approach as Ratalaika, but they just started releasing the same game as a reskin. With some games, you don’t really notice it because there is a ton of effort put in, but with these games, I can’t say the same. Just looking at the games released recently it doesn’t look like what the Playstation store should be, but more like the Steam marketplace before they filtered out the shovelware.

While it’s not that big of a problem when it happens once in a while with 1 dev its not that big of a deal, when a ton of publishers start doing the exact same thing it does become to stand out a lot, even from outsiders (former trophy hunters) perspective. Just looking at the trophy hunter that is 1st place on the leaderboard Ikemenzi’s stats from the past 2/3 years it starts to look a lot more obvious. this past year he has unlocked over 2500+ platinum trophies, the year before? only 600!

Of course, we wanted to know what actual trophy hunters think about this problem and if they see my point as an issue as well, so we asked Ikemenzi, the number 1 trophy hunter, himself what he thinks about the current state of the trophy system, he said the following to us:

I feel the current trophy system is broken. I agree with everything in this article.

Sony should get rid of shovelware and set rules for trophies. Take a lesson from xbox.

Something Ikemenzi said really stuck with me, and that is the lesson PlayStation should learn from Xbox. While Xbox also has the games from Ratalaika and other developers I mentioned earlier, they don’t seem to have the same problem Playstation has. Some of the easy platinum games that only take 1 minute to complete are actually on the Xbox store as well, but what’s the difference? They actually don’t have achievements on it! Ratalaika does have achievements in their games, so it seems like Xbox does have some quality control when it comes to their system when releasing indie games.

What do developers actually think about these easy platinum games and does that impact them in any way? That’s why we reached out to a publisher that wanted to stay anonymous and they said the following:

If a minor thing is wrong, you have to wait another 2/3 weeks. Since these games started to come to the PlayStation store, the sales have gone down upto 30%, and on Xbox they increased upto 30%. Data shows a clear trend that playstation users are migrating over to xbox.

If you enjoyed this article then please check out some of our other Editorials where every week we jump into a different topic about anything gaming. Please let us know what you think about the current way the Playstation Trophy System is now in the comments or on Twitter/Discord!