After all the ups and downs, is Cyberpunk on the level it should be? 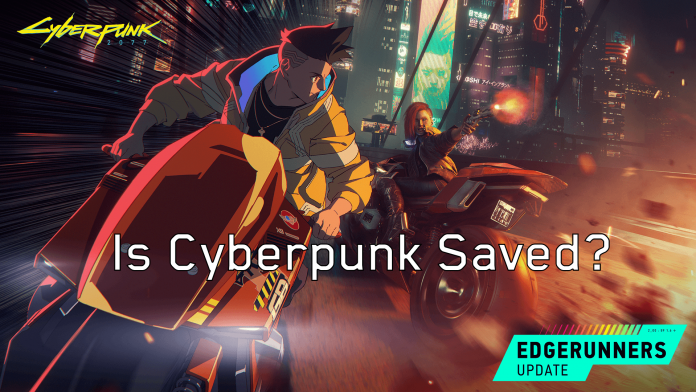 Cyberpunk 2077 came out with a lot of deserved hate for releasing a product far from ready for release. Since its release last year they tried to fix the game with some bug fixes, patches, updates, and some new content, but is Cyberpunk 2077 saved already, and does it have a future?

We all probably know about all the bad things were for cyberpunk 2077 on release, but in the time after its release, they did manage to do a ton of bug fixes to the game that kinda foxed the game, but it’s not really finished yet. Even during a big stream where they showcased a “big fix” stuff went wrong and failed hard after the patch. But after the release of Cyberpunk: Edgerunners and an in-game update with content from the anime, the sales and player count of the game skyrocketed, even past The Witcher 3’s numbers.

I personally think Cyberpunk 2077 has a big future ahead of itself, but fixing the past is something they still have trouble with even to this day. The cancelation of the DLC planned for last-gen and stopping the patches on those consoles is a clear sign that they just overshot what they thought was possible. Sadly, the game is still not up to par to be an enjoyable experience on last gen and that is not going to change.

On Current/next-gen consoles it’s a whole different story. As of writing, the game does have its bugs that have been there since day 1, but it’s a lot more playable than last gen, and then I’m not even talking about the PC version that is just running great with the least issues (not counting stadia). With updates still coming to the current gen and pc I’m very optimistic that the game will be one of the great games, but due to the stain of the release, it will probably never really going to be seen as what it is going to be, a good game.

With the recent good press of Cyberpunk Edgerunners and the new story DLC coming later, I have some high hopes that the game will be amazing when they actually end active development on the game, and with the sequel being announced I can see that CD Project Red is trying its hardest to save it’s IP. Is it saved today? No, but it for sure will be in a few months.

If you enjoyed this article then please check out some of our other Editorials where every week we jump into a different topic about anything gaming. Please let us know what you think about Cyberpunk 2077 in the comments or on Twitter/Discord!