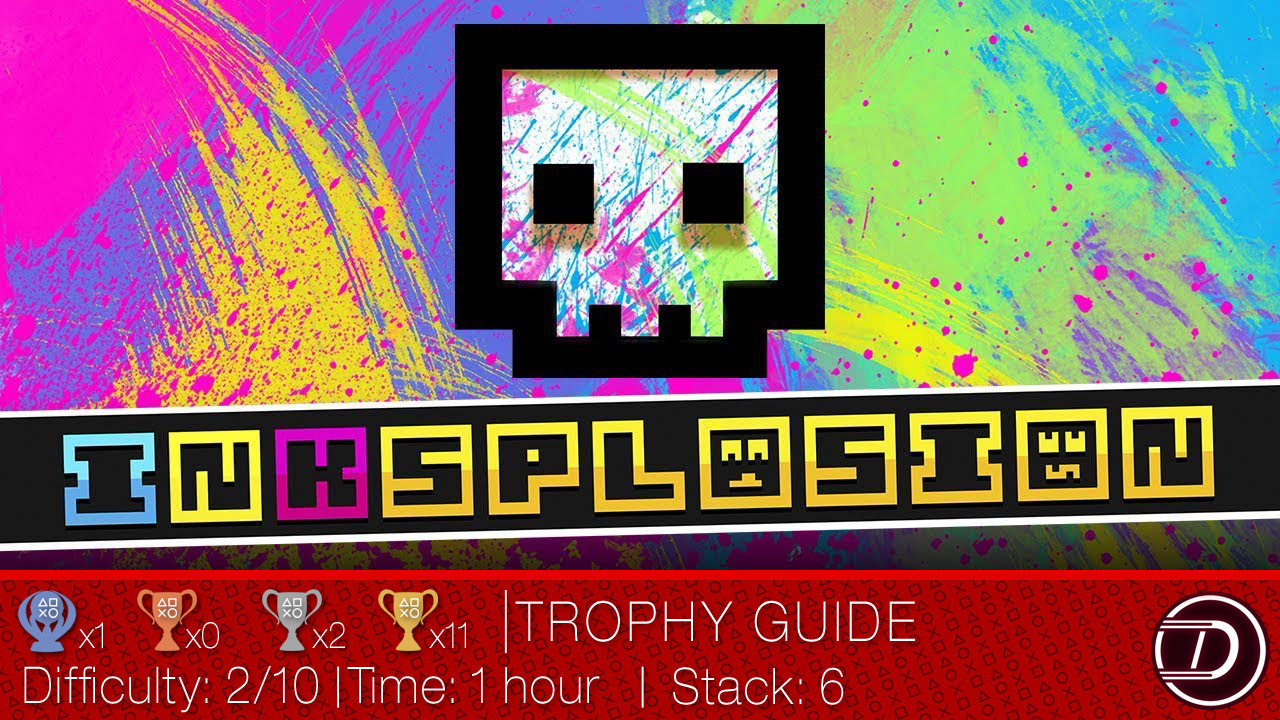 Welcome to the InkSplosion Trophy Guide! hoot your enemies and color the arena in this fun little indie that you can finish in about 5 minutes depending on your skill!

Unlock The Arena Mode. You’ll also gain most of the trophies in this stage as well.

Kill Or Get Killed

This stage is the easiest by far. All you have to do is go into Hard Mode after you unlock it, and kill 1 enemy for the last trophy and the platinum!

For this trophy, you simply have to kill your very first enemy in the game. After you do that, the trophy will unlock.

Simply die for the first time in the game for this trophy to unlock.

To get this trophy, you have to reach level 5.

This will come naturally as you go for

Getting Better. Once you reach the 5th level in Classic Mode, the trophy will unlock.

This trophy requires you to reach level 10 in Classic Mode.

This will come naturally as you are getting 100,000 points needed for the

For this trophy to unlock, you must reach 25,000 points in Classic Mode. This will come naturally as you get 100,000 points.

The requirement for this trophy is reaching 50,000 points in Classic Mode. This will come naturally as you get 100,000 points.

To unlock this trophy, you have to reach 75,000 points in Classic Mode. This trophy will come naturally as you go for 100,000 points.

For this trophy, you must reach 100,000 points. This is far easier than it sounds. After each stage consists of 4 enemies, each ranging from 200-400 points each, and if you don’t get hit, you get a score multiplier. It’s not very large, but you get one and its added by itself even though the kills will still show up with normal numbers. If you get damaged, you lose the multiplier, and health, which is represented by the bar at the top of the screen. Every time you get a kill, you get health back at least. The only thing that makes this a little annoying, is that all the points have to be done on one run, and each stage, you get a random weapon.

The weapons are as follows:

After you have acquired 100,000 points the trophy will unlock and you can proceed on your way to Arena Mode!

In Arena mode, you are just in a basic stage, where waves of enemies come at you non stop. The waves consist of 4 enemies, just like the levels in Classic Mode. After each wave, your gun is randomized, so it once again comes down to luck of the draw for your weapon. This trophy will unlock on wave 7 of arena mode, as it contains your 25th enemy.

This trophy will come naturally, as you have to kill 100 enemies for

This trophy requires you to kill 75 enemies in Arena Mode. This will unlock during your 18th wave of enemies. This will come naturally while going for

This is the last trophy in Arena Mode. You have to make it through 25 consecutive waves of enemies to unlock this, as the 25th wave contains the 100th enemy in it.

This trophy requires you to first get 100,000 points in Arena Mode to unlock Hard Mode. After you have Hard Mode unlocked, all you do is simply start a game on Hard Mode, and kill the first enemy, and the trophy will unlock.