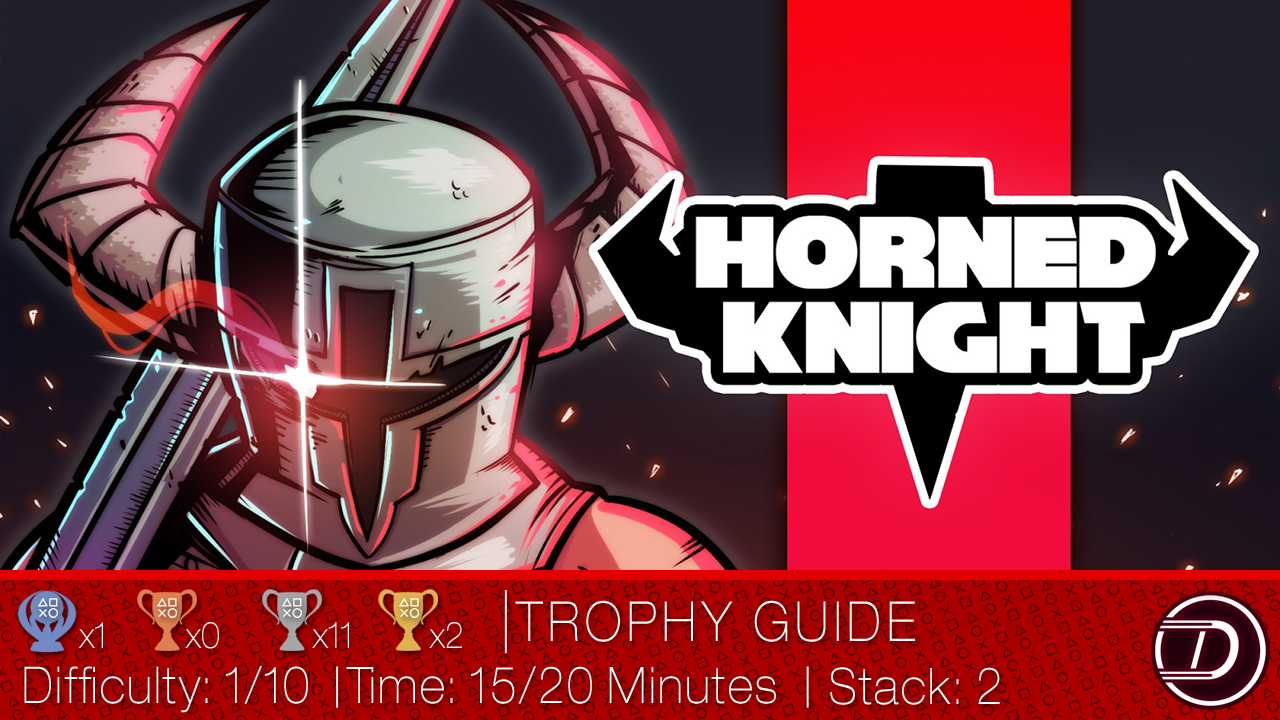 Welcome to the Horned Knight Trophy Guide!
Horned Knight is a nice simplistic 2D Platformer that was developed by Josep Monzonís of 2kSomnis and published to consoles by 2Awesome Studio.

Armed with his trusty sword, can you help the brave knight fight through the caves to escape and be reunited with his family?!

Step 1: Play through the first 8 Levels
At the end of this stage you may very well have the Platinum, as there is nothing too difficult about this game, as it can be played on Normal Difficulty.
You are introduced into the game via the first level, as it will guide you through the level introducing you to new mechanics as you progress.

Most, if not all trophies could be earned by the time you get to the end of the boss fight in Chapter 1.

You got my heart

Dashing through the wind

I believe I can fly

Advancing by leaps and bounds

Step 2: Miscellaneous Clean-Up
There is a good chance that you would have gotten all these trophies buy now, however if you have not, this is the time to die over and over, block some projectiles & slay some more enemies.

Nobody can stop you

Once you have earned

Slay them all! feel free to dash/jump past enemies to complete the levels quicker. There are checkpoints throughout each level that reset you heart meter, so it is worth remembering that sometimes it is better to die and have full life to attempt a part in the game.
See

Advancing by leaps and bounds for a simplistic tip to defeat the Boss at the end of Level 8.

You will most probably achieve this naturally within the first couple of levels. The quickest way to die is to fall into the Lava, as this will take your whole life away, rather than just a “Heart”.

There is Lava in all levels you will encounter through Chapter 1.

to keep falling into the Lava. You will earn this within Level 1, as there are exactly 10 enemies to kill as part of the tutorial.
If you’ve rushed through the Level there are plenty of enemies throughout all the levels.

There should no need to go out of your way to kill this many enemies, as there are plenty of them within each level.
The enemies you kill prior to a death also count, so you’ll have no problems here.

Advancing by leaps and bounds for a great spot to farm enemy kills if you have not earned this by the end of Level 8.

Nobody can stop you.

The “proyectiles” can be thwarted by using the

button to hit them with the sword just before they reach you.
This may take a little practice to get the timing, but it is not too difficult.

If you have not earned this trophy by the time you have finished Chapter 1, head back into Level 4 as there is a Snake spitting Lava right at the beginning of the Level.

You start each level with 6 “Hearts” that can be replenished by killing enemies to gain an extra heart.

When you kill an enemy it will build a power bar up in the top left corner and once full the next enemy you kill will drop a heart. Collect this and you will gain another heart.

I believe I can fly.

A dash is executed by pressing

and is learnt during Level 1 and you will earn this trophy naturally as you progress through the Levels.

Complete the first Level. There is nothing difficult at all about this level, due to the nature of it being an introductory level.

You do not even have to go through the Tutorial Steps to earn the abilities, as you can simply dash your way through the whole level to the exit.

Awarded for completing the first 3 Levels.
If you are struggling to complete a certain part of the level note that there are checkpoints throughout each level that reset you heart meter. It is worth remembering that sometimes it is better to die and have full life to attempt a part in the game.

There are on occasions some trickier platforming sections that involve dashing to another part, but in all honesty this is a very easy level.

Awarded after defeating the “Boss” within Level 8.
This is a very easy boss fight where you can simply stand at either the Left, or Right side of the screen and keep pressing

to defeat all enemies, including the Boss.
You will get hit on occasions, but the amount of smaller enemies you kill will keep you hearts replenished.

You can of course try to run around and time your hits correctly if you wish…..