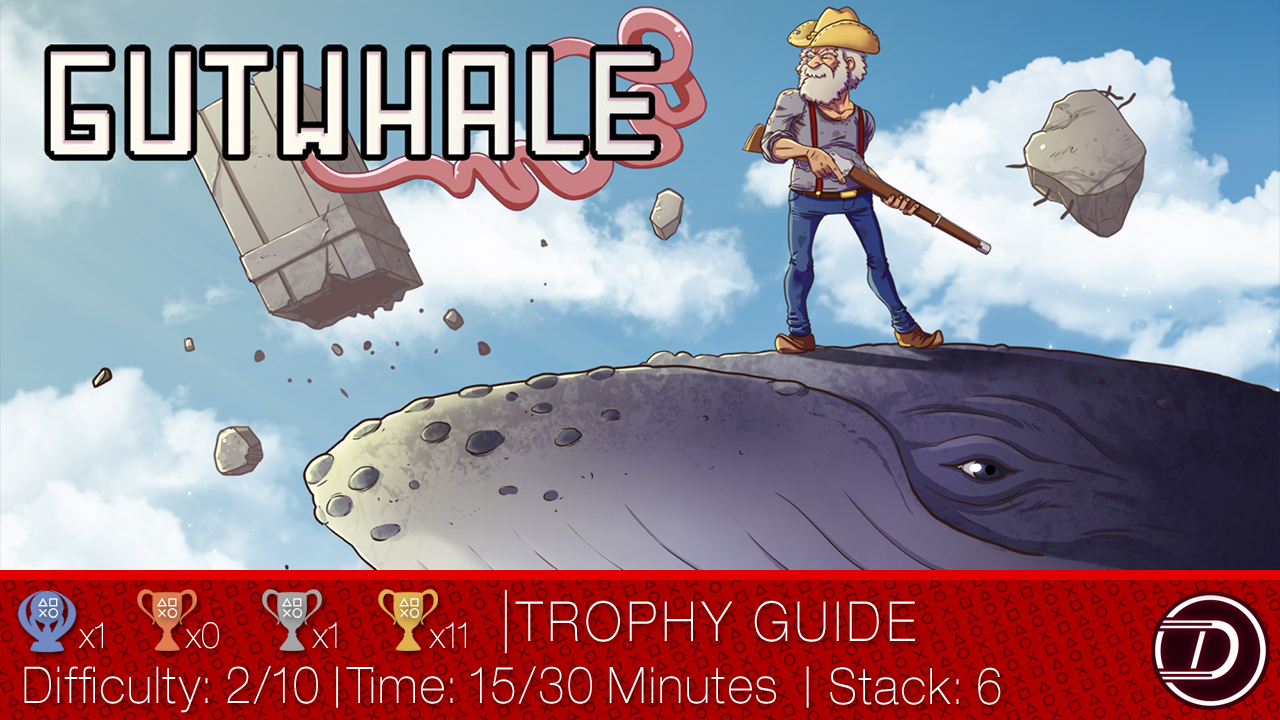 Welcome to the Gutwhale Trophy Guide!
Descend deep down into the gut, keep your ammo close, unlock weird hats, and get crushed by a van!
This game is developed by Stuffed Wombat and published on consoles by Ratalaika Games.

Step 1: Tutorial & Finish the game
Each run of this game can be easily done in less than 2 minutes once you got the hang of it. Keep trying and improving until you master the game.
The game has three levels with 4 layers each one and you need to clear them all from the enemies to access the next layer.
If you want the best route and tips to learn everything before even starting, make sure to read the Tips and Strategies section of this guide.

Step 2: True ending & Cleanup
Now that you are a Gutwhale master, you should only have a few “grindy” trophies left and the true ending-related one. Keep playing to unlock them all and check the video below in this guide’s Tips and Strategies section. to discover how to unlock the true ending.

Gutwhale is an infinite action roguelike where you only have one bullet you need to pick it up again after shooting it. If not tackled in the correct way, this game can be a pain to beat.
However, if you read and follow all the tips here, you won’t have trouble mastering the game pretty quickly.

You will get this trophy after completing the first level of the game.

You will get this trophy after completing the second level of the game.

You will get this trophy after completing the third level of the game.

To get the true ending, you need to first complete the game at least one time.

Once you are back in the starting room, you will see that the door on the right will be now open. Proceed through it and keep going upstairs until you reach the top room.
Here you will find a button on the far left that, if pressed, will give you the ability to move the cursor at the center of the room.

Grab the little icons down below and use them to create some sorts of steps to reach the light at the top of the room. Jump on them (Use the Workout Hat to jump higher) and reach the light to trigger the true ending.
Check the video above in the Tips and Strategies section of this guide for a visual breakdown (Related part begins at 01:54).

This trophy is kinda grindy as you will have to set to zero the counter you can see on the big frog at the end of every level. It has a counter of 50, which means that you will have to hit the frog with a bullet (or with yourself if you want to die) 50 times.

The fastest way to get this trophy is to reach the final layer of the first level, shoot at the frog, kill yourself against it and repeat until you get the trophy.

To get a combo you have to shoot at an enemy and pick up the bullet again without letting it touching the ground. This mechanic of the game will be really useful to get a lot of points to buy upgrades, hearts, and the God Hat later on level 3.

Shoot, kill, quickly pick up the bullet again and repeat until you get a 10x combo. Keep in mind that if you miss a shot, or the bullet hits the ground the combo will reset.

Skull enemies can be found from level 2. These will try to smash you once you step under them but you can easily kill them by hitting the red part of their heads. You can also kill them normally but you will need to use 2 bullets instead of one.

Frogs can be found in the last level of the game. However, you can also wear the Frog Hat and every enemy will be turned into a frog.
Kill 50 of them to unlock the trophy.

100 points is a fairly easy score to reach, You won’t have any troubles, keep up the combo to fasten the process.