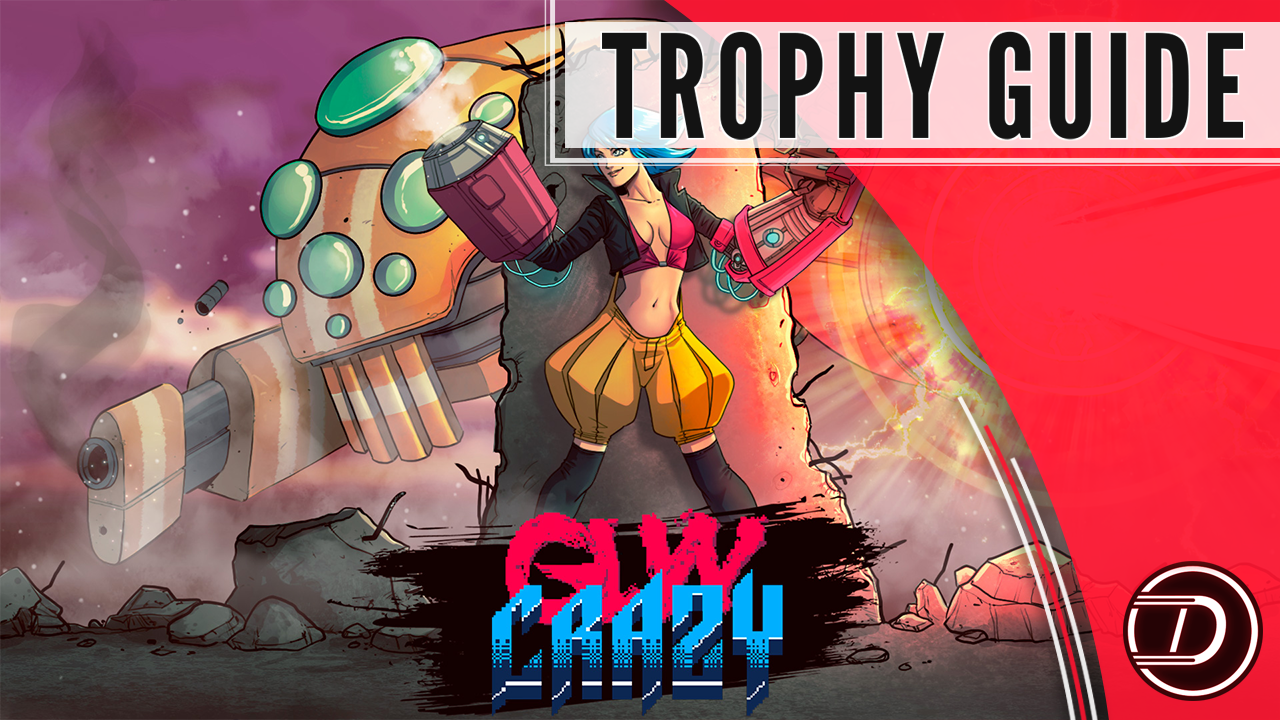 Welcome to the Gun Crazy Trophy Guide! Become the fiercest lady on the police force! Take out the bad guys through 4 unique levels filled with challenging bosses and powerful special guns. This side-scroller shooter is developed by Ritual Games and published on consoles by Ratalaika Games.

In this step, you will have to select arcade mode and keep shooting to everything you will find on your steps. All the trophies should pop without any issues.
Try to reach a score of 2.000 and to not die. However, if you die, you can select continue and restart from where you have died so nothing hard.

Level 2 is composed of a single stage with a “hard” enemy and a boss.

If you have died often during the first step, you may have missed the two score related trophies. Keep on practicing until you can make it even though it’s not hard and you should make it at your first try.

Here a good video provided by Dino_Roar Gaming that shows how to easily get the platinum trophy:

Hoppers are green bouncing slimes scattered around all the levels. Kill one of them to unlock the trophy.

Dips are flying mantis scattered around all the levels. kill one of them to unlock the trophy. You need to be “faster” because it flies and disappears quite rapidly.

Runners are frogs-like enemies and they will run towards you. They will appear later on the second stage of the first level. Simply kill one of them to get the trophy.

Robots are bigger enemies and you will meet them from the last stage of level 1. They seem hard to beat but they are a walk in the park. Keep shooting at them and you will kill them without troubles.

The second mini-boss can be a little trickier than the previous one. It will fly around the area in a specific pattern while shooting at you.
Avoid him and never stop shooting at him even though he will hit you no matter what. Try to use as better as you can, your lives and you will kill it eventually.

The last boss is a golden robot.  He will continuously shoot at you, so keep moving and jumping on the two platforms on your left to avoid bullets and keep shooting at him.
You will know you are almost done with him when he starts to blink red.

You can get a weapon enhancement from red crates and they will last for a short time. They are quite useless, to be honest, but they can do the trick against the bosses making the fight easier.

The score is set in the left corner of the screen. To increase it you just have to kill enemies repeatedly.
It resets when you die but it’s easy to reach a total score of 2.000 so don’t worry.

NOTE: in order to unlock the trophy you need to score over 2.000 points.

Level 1 is completed when you kill the last boss (the gold robot).
This level has 3 stages and each one has a mini-boss at the end. Keep on shooting and you will reach the end in no time (check

Mini Boss 1 and Mini Boss 2 for strategies on how to beat these bosses).

The last boss will continuously shoot at you, so keep moving and jumping on the two platforms on your left to avoid bullets and keep shooting at him.

Level 2 has only 1 stage but it’s kinda long and repetitive. You will shoot at some bouncing balls for most of the time. The best strategy to avoid them is to move in one of the two corners and keep shooting. Be careful that the balls will split in little ones when hit and they can easily reach you.

After this sequence, there will be a boss fight: a red spaceship will appear and he will start shooting at you like there’s no tomorrow.
Don’t panic, it’s easy as it sounds because the bullets have a specific pattern and they are easy to dodge. Keep shooting and you will make it in no time.