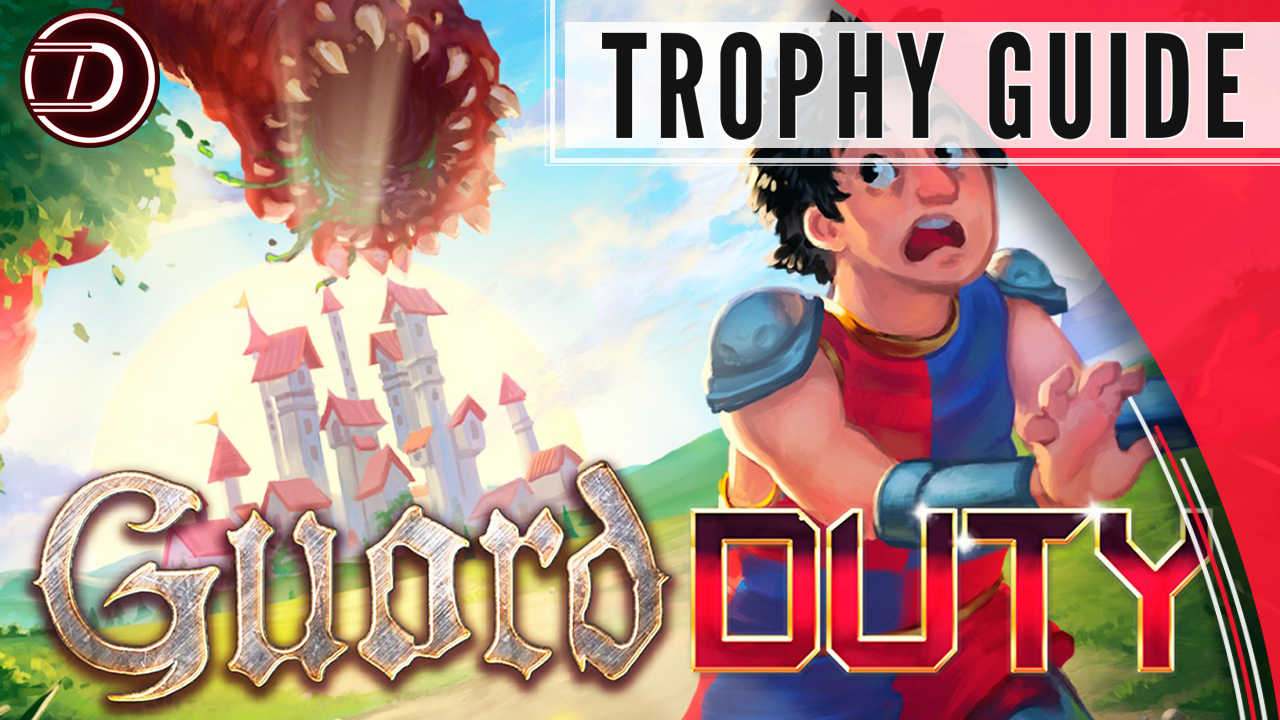 Welcome to the Guard Duty Trophy Guide! Join Agent Starborn to save the Earth, and vanquish an evil that has been around for centuries!
This game is developed by Sick Chicken Studios and published by Ratalaika Games.

Really, this game only needs one step. All the trophies except 1 come from story progression, and even if you miss the missable, you can get it in 5 minutes of starting the game. Enjoy the weirdness, and have fun! If you get the one missable, you’ll have the plat at the end! Check the walkthrough section if you want a step by step guide.

Two Of A Kind

Turn Up The Heat

Step 2: Get the missable trophy

If you managed to miss the one missable trophy, now is the time to get it. Luckily it’s within the first 5 minutes of the game and doesn’t take long to get!

– Pick Up the Dart;– Try to open the Hatch;– Grab the Rope;– Open Inventory and use the rope with the Window;– Interact with the rope;– Go left into the castle;– Continue left and talk to some guards (

Airborne);– Grab the boot on the right side of the screen;– Leave by going down;– Go to the gate;– Leave the area;– Go to the market;– Pick up the other boot next to the fountain;– Interact with the fountain;– Open the inventory and grab a coin and use it with the assassin in the hay pile (

Assassin’s Greed);– Interact with the men in the stall. Choose “I have some coin now…”;– Open Inventory and hit circle on the “froot”;– Go to the farm;– Use the net in your inventory, on the bridge;– Leave the area and come back and chase the frog to the net and grab it;– Go back to the market and use the frog with Girtrude! Yuck! (

Pucker Up);– Pick up your trousers! (About time);– Walk over to the fruit stall, and open your inventory and use the To-Do list on the men and get Medusa Root;– Use Medusa Root on yourself;– Go to the gate again;– Check “The Usual Spot” under the sign on the right;– Use the key on the chest;– Go to the farm;– Use a piece of armor on yourself from the inventory, and get changed out of your underwear! (

Suited and Booted);– Go to the castle and go see the guards who kicked you out and watch the cutscene.

– Once you get control again, you unlock

Royal Blood;– Talk to the guard and ask about the “Crime Scene” and Hendrick;– Go to the market and talk to Hendrick who’s between the fruit stand and the store;– Go into the bar on the left;– Talk to the guy playing darts and ask where he was in the morning;– Talk to the mage at the bar and exhaust all of the dialogue (

Wicked Words);– Interact with the “Lost Box” on the left and get the key to your bedroom;– Open the book you got from the mage by pressing circle on it in the inventory;– Go to the castle;– Go all the way right until you see a sign for “Staff Quarters”. Go in the door and up the ladder;– Look out your window and you’ll talk about the book and get a new item;– Go to the hallway with two guards and go up the right stairs to the Library;– Use the library card with the bookkeeper;– Look at the “E” shelf for Ancient languages book;– Grab the ladder, then climb it (

Photo Op);– Interact with the shutter on the right side of the room to leave;– Go into the castle and use the Fake ID on the Clerk (

Papers, Please);– Go to the gate and use the DLC on the guard to leave the castle.

– Go to the top right map selection, and watch the scene play out (

Mind The Gap);– Go to the spot of the map with a worm popping in and out;– Interact with the rope to drop the knight;– Go to the forest in the bottom right of the world map. Go through until you reach a cave with a person and monster in it;– Grab the ladder;– Go back to the monster put and use the ladder on the knight;– After you fail the minigame, go back to the forest and go to the cave where the woman and troll were;– Leave the forest;– Use the dart on the Festering Sore;– In the forest, move to the top of the area until you encounter the spider, the go left, hit the web, down, left, hit the web, down, down, hit the web, left, down, hit the web, then finally left. (

Special Delivery);– Pick up the paint bucket;– Go back to the giant gap, and use the gears with the catapult (

Open Sesame);– Use the dagger on Theremin.

– After the cutscene at the opening, you’ll get

???);– Enter either door, and keep going right and you’ll see a cutscene (

Turn Up The Heat and

Once you start the game, grab the rope from the wall, use it on the window, and you’ll go out it. Next, you have to go into the castle on the left side of the screen. Continue going left and you’ll talk to two guards. You’ll see a scene and the trophy will unlock.

This will unlock once you get the toad from the farm and use it on Girtrude in the market! Then you’ll see quite the scene.

In the market, there’s an assassin in a pile of hay. Simply open up the inventory and select the coin and use it with him and the trophy pops.

After you acquire all your pieces of armor, you go to the farm to finally get changed out of your underwear! Yay clothes!

You get this automatically at the start of Act 1!

In Act 1, you’ll be able to enter the bar. Once you’re inside, you have to talk to the mage at the bar. Exhaust all dialogue options and eventually, he’ll tell you about a book, and then give it to you!

This unlocks once you translate the creepy book in the castle library in Act 1!

In Act 1, when you need to get a piece of ID to get the DLC, you’ll need to go to the library. Once you finish the puzzle in the room and get your ID, the trophy unlocks!

In Act 1, right after you get the Fake ID from the study room, go back to the castle and use said ID with the clerk and get this trophy.

In Act 2, at the beginning, you’ll have 4 options of places to go. Go to the top right. Watch the scene play out and the trophy is yours.

In Act 2, you’ll be in a foggy forest having to deal with a spider. Once you get rid of it, this trophy unlocks.

In Act 2, once you melt the ice and get the supplies, you take the paint back to the troll cave for the painter. Now she can paint the wall red!

In Act 2, after you finally fix the catapult and have a helmet, you can get shot over the gap, and end up in a new area, with a shiny new trophy too!

In Act 2, once you’re in the snowy mountains and see a great big door in a cave, you’ll be tasked to open it. Once you use the frozen knight, the goat, and yourself on the pressure plates, and enter the door, the trophy unlocks.

Unlocked instantly after the cutscene at the beginning of Act 3.

In Act 3, once you drag the security bots body to the elevator and cut off his arm, this will pop.

In Act 3, after you’ve finally saved the general and are able to use the elevator, you end up in a teleporter room. After you get sent back into time, this trophy unlocks.

In Act 3, once you’re floating in time, keep going right and you’ll see a cutscene and then this trophy will unlock.

In Act 3, once you’re in the sacrifice room again, and you use the dagger on the princess, this trophy pops during the cutscene.