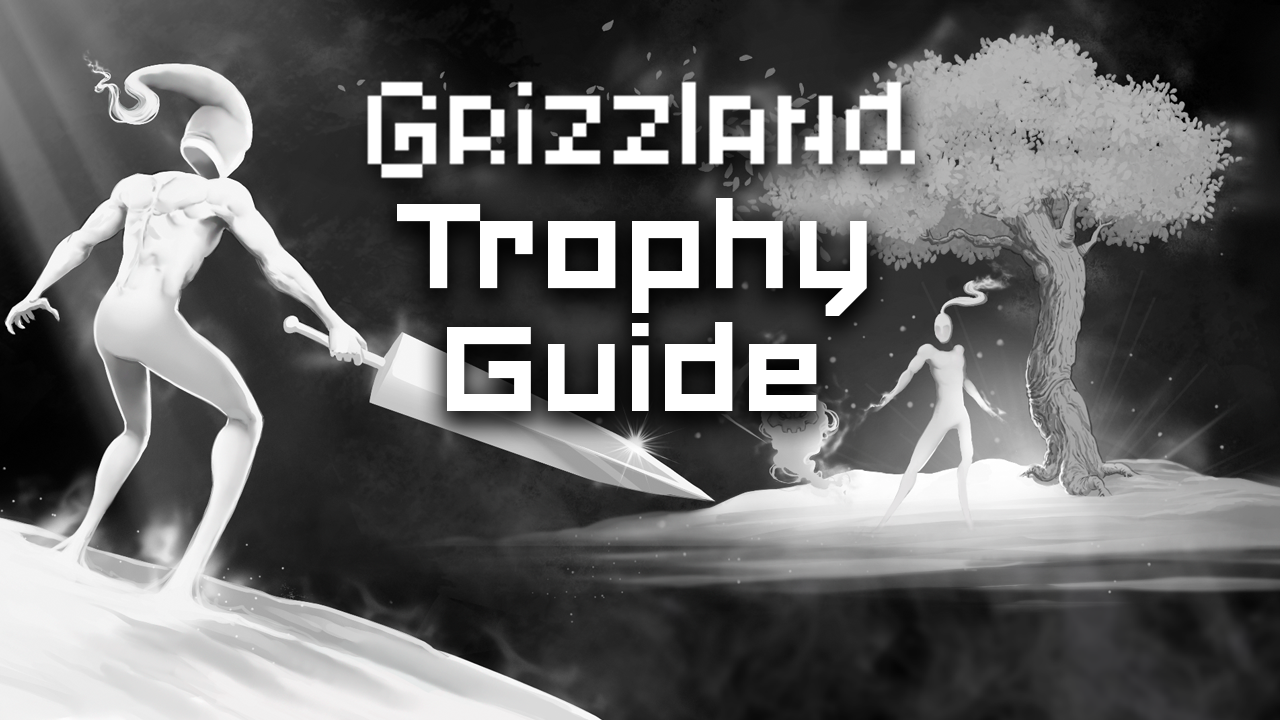 Welcome to the Grizzland Trophy Guide! The game that is a homage to old side scrollers. It’s partly open world, with no real directions on where to go. Technically you can go anywhere! Now, come, sit, and get an easy and quick platinum!

There’s only one stage, as everything can be gotten by the 4th boss, and you can go back and explore at your leisure. So by the end of this stage, you’ll have the platinum.

This is the first boss and appears in level 2. This boss is quite easy. He will run at you and you attack him when he’s close. He has two attacks. When he turns invisible, items will drop from the sky. Easy enough to dodge. It’s the second attack that’s harder. He will lean back a little and throw a ninja star at you. This is the attack you have to watch for. Once you beat him, the trophy unlocks.

To be able to kill this boss, you have to acquire double jump, which is after the Ninja boss, Kein. Once you have double jump, you jump to the other side of the boss and start attacking his back. He will call down 3 swords to do damage to you as his attack. Simply stand between two of them to dodge them, and keep attacking. Once he is defeated, this trophy will unlock.

This boss is rough. First of all, you have to try and hit him as many times as possible when you see him. Could hit him twice, could hit him seven times. The reason for this is because he teleports after every hit. After about ten seconds, the boss will disappear and you’ll be tasked to just dodge objects like crazy. After you dodge enough, the boss will reappear. Try to hit him as many times as possible, then rinse and repeat until he’s dead. After you defeat him, the trophy will unlock.

This boss is in the fourth level and to the right. In the same vein as the Sorcerer, you only have a set time to hit him. Luckily though, after that time, you get thrown into a random, easy, obstacle course. Get through it to the end, and then the boss will appear and you can take your chance at attacking him again! Once he’s beaten, the trophy will unlock.

All you have to do to get this trophy is gather all 4 of the main items. These come as you progress through the game. The items are as follows:

To get this trophy, you have to bring back a bat enemy to a cage in level 2. After the Bird boss, Alternib, you’ll find someone with a cage. If you talk to them, they’ll say they lost their bat. If you go back left, you’ll see a bat enemy. Get this bat to follow you all the way back to the cage until it touches it, and you’ll finish this side quest and get the trophy.

In the bottom right of the map, in level 1, you’ll come across a save point with 3 jars underneath it. Jump and attack in the air to do a spin move. If you don’t destroy all 3 pots in one hit, leave the screen and hold triangle to die, then try again.

In level 3, when you’re exploring the right side of the level, you’ll come to a symbol between two candles. If you stand at it, the screen shakes and a door opens. This is the merchant. Simply go inside and buy something.

Hidden rooms are noticeable by weird effects on the map, that resemble particles floating from the ground. Just below are the 3 earliest secret rooms that can be found.

To get this trophy, you have to find 3 hidden rooms. Hidden rooms are noticed by weird particle effects coming up from the ground in one certain spot. Refer to

Strange Guy for all the earliest hidden rooms.

For this trophy to unlock, you need to find a single note. Notes give a little more on the world, and aren’t needed for anything. Below are the 5 earliest notes you can get:

This trophy requires you to get 5 Notes. Notes are.collectibles, that are scattered around as lore pieces in the world. Refer to “Rookie” to find the 5 earliest notes in the game!